You too can have a car-blocking block party! 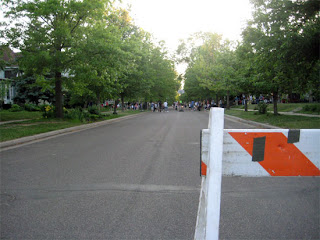 I ended up going past my dad's house the other day for his block party. Apparently in Saint Paul you can apply for a permit to block off the ends of your street (provided you get neighbors to approve, or something) and go ahead and have a party in the street.

This one, on Portland Avenue, was in honor of a high school graduation. The Lex-Ham Community Band (a fine organization) played some rousing marches while older folks sat around in chairs listening and drinking cool beverages.

Kids twirled fire in the street, and there were a whole bunch of street games like football throwing, basketball basketing, and the subtle art of standing around and being high school students. Whole families came outside and kids ran around without their parents. 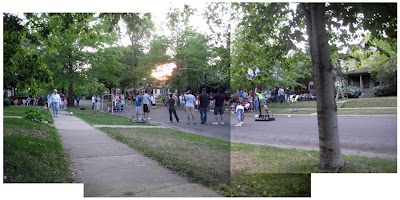 [Kids playing in the street.]

A nicely-dressed lady came out of her house with a beautiful plate of fresh lemon bars, and I was lucky enough to get offered one. It was straight out of one of those movies that makes fun of the 50s.

To me, it seemed so easy to have a block party. And it seemed like such a good idea. All you'd need is a good excuse (a high school graduation is a good one) and some neighbor connections, and all of a sudden you've got a reason to chat informally with people on the block, in a very low-key way that demands little of the relationship. You can just meet people, or hang out and listen to music together, but its a loose-tie position that's in the valuable middle ground between "I don't know you" and "let's be best friends".

Of course, you also need to have a sufficiently blockable block, one that has sidewalks and front yards and isn't too wide and isn't a crucial through street. I've heard of suburban neighborhoods doing this on culs-de-sac, which seems like a nice idea. Or you can scale it up and do something like Grand Old Day, where you block off a whole street for a few miles. 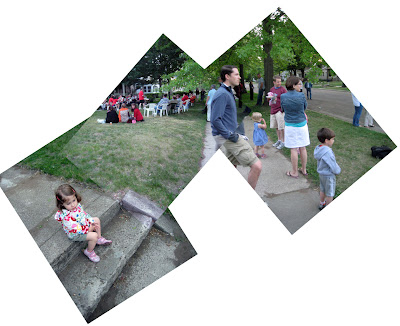 [All age ranges exploring the material possibilities of the sidewalk.]


[One example of the perils of playing in the street with cars.]
When I was a kid, my brothers and I used to play football in the middle of the street. Every once in a while, we'd end up moving out of the way for a car, but it was totally do-able to play in the street. Still, though, we could have been run over and squashed by a reckless driver. It was possible!

My point is that just closing streets off to cars for a little while can make such a difference to your streets, yards, and the space around your house. It's a surprisingly easy thing to do. It just takes one orange and white barrier, and some precisely parked cars. And then, all of a sudden, you have a playground park in the middle of your street!

[A pair of cars is all it takes to double the amount of parkland in your neighborhood.]
Posted by Bill Lindeke at 12:15 PM

What a great day. Last weekend it was my Grandpa's 90th Birthday in Cannon Falls, MN. Would have been nice to have a sunny day such as this, but instead we got rained on, granted we needed the rain like crazy.

I know the city of Minneapolis makes a big effort for National night out and that neighborhoods can request to have streets blocked off to traffic for their activities. Great photos, wish I was young enough again to run around without a care.