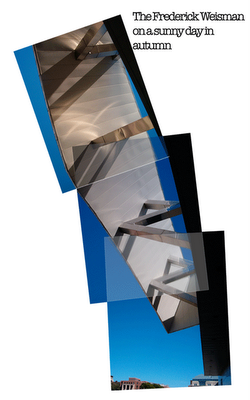 I'm attending the University of Minnesota these days, and each time I walk over the Mississippi River, along the Washington Avenue bridge, I look up and see the Frank Gehry-designed Weisman Art Museum. The lumpy, wild, metallic amalgam sits right next to a set of generic, vaguely industrial red brick dorms, and the contrast couldn't be more striking.

That said, both buildings feature a self-sustaining holism, the kind of inner consistency that is not often found in playfully referential architecture that is the common currency of our day. That the Gehry and its lackluster neighbor both make a claim to some kind of internal structure is noteworthy, particularly as they each form their composition in such divergent ways.

The question for now is, in what sense can these buildings be considered organisms? Do they have a life of their own? In other words, do their internal rules of formation, the way that they claim the space around them, extend in the world in the same way that our ontogeny operates within our bodies? Does this building become a monster? Does its architect become Dr. Frankengehry?

Say "yes" and you'll be granting me quite the logical favor . But, having given some vital credit, how do we then read the fact that Gehry's building has extended its tendril past its original embodiment? What do we make of the twin bridges that form Weisman roots across Washington Avenue? All I can say is, be afraid. Be Gehry afraid. 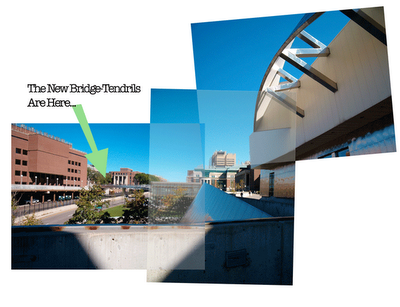 My Way or the Skyway: Part II 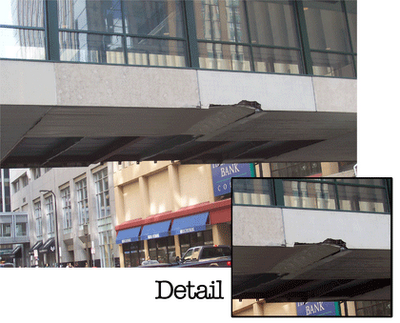 The follow up to my popular, My Way or the Skyway. This time, they're back, and they've reached new depths. So much so, that you bump your head going under them...
Posted by Bill Lindeke at 4:46 PM No comments: 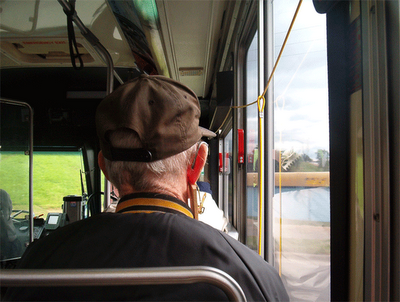 No, seriously, I think that's his name. He sat down on the bus seat right in front of me, while I was trying to read about how each of us individually creates meaning from the complex tapestry of the American city. I was sitting there with my nose in the book when all of a sudden this young kid (there was a whole, loud group of them in the back of the bus, where the cool kids sit) ... this kid plunks down next to me on the seat.

The bus was not even close to full, so that was kind of weird. But, being a non-confrontational Minnesotan, I ignored my new neighbor.

Soon he left, but not long after that another, different kid sat down next to me. Was this some sort of practical joke, I asked myself, and I wondered ignoringly until the kid turned back to her friends and shouted, "It's Real!" A sea of giggles bubbled up from the audience.

That got me thinking, and noticing. What's real? What's so funny?

Then I noticed the guy in front of me. He had a mousetrap on his ear.

Now, granted, this was no punk making a point. This was a typical working-class, mesh-hat octogenerian, sitting and riding the bus because he was too old or too poor to drive. He was your everyday bus companion --- except that he had a mousetrap on his ear.

I took some invasive pictures, and the kids kept giggling, but either the old man didn't notice, or he was too proud to acknowledge us. And, as I sat there in wonder, I just had to start laughing. I busted a gut -- it was so utterly foreign, so abnormal, so crazy.

A while later a lady who apparently was acquainted with the guy boarded the bus, saw him, and sat down next to him. "Art. How've you been?" 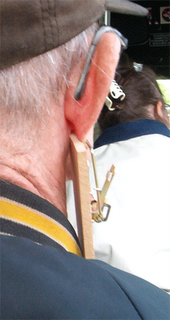 Again, Art mumbled... something about the mousetrap. I couldn't make it out. The only thing I heard was the word "yesterday."

"You're crazy," the lady said, and she quickly moved to another seat.

Maybe he was crazy. Though, apart from the mousetrap, he didn't seem particularly loony to me. But this guy has been making me laugh for going on eight hours now. It's made me think about all the ways in which the world don't move to the beat of just one drum. And that, to me, is Art.
Posted by Bill Lindeke at 11:22 PM 4 comments:

The Hard Times Cafe on Riverside Avenue has long been my favorite place to observe TC's diversity. I'm there the other day and for some reason I start talking to the barkeep/barista(o) guy behind the coffee bar. He's always there and I usually stick to my $1 (it's french press) coffee purchasing script but yesterday I asked him how he was doing and he opened up --

"I'm getting outa here. This neighborhood is getting ruined by those people."

At that he pointed in the general direction of these three people sitting at a table near me. He started talking about the city council's plan for security cameras, and the new condo going up somewhere nearby. He was pretty worked up about it, and you could tell that something had pushed him

"Those people," I asked, incredulous at the thought that he meant the three people sitting right there in the HTC, gathered around a table strewn with notebooks.

"Yeah, those people right there?"

"Do you still give them coffee?"

So I took their picture.

For my two sense, I think the West Bank is being ruined by the two ajacently encroaching Universities more than anything else. There just isn't a lot left of the old counter-cultural punk beatnik scene left on the West Bank, probably becasue a lot of rental housing has been torn down and replaced with dorms, condos and a Chipolte. In fact, I'm told (though I find this hard to believe) that Augsburg is putting in a new dorm that will have a Barnes & Noble in the first floor retail space.

Just for nostaligia's sake, here's the Wikipedia article on the West Bank.

Later that day, I was biking past the Skyscape condo going up in Eliot Park and I saw a group of yuppies being led on a tour of some of the demonstration condos. A shaved-head construction-type guy in a white T-shirt was leading this group of a dozen or so couples in various types of suit. These are the kind of people that were living in the suburbs ten years ago. Now they're shopping for space in Eliot Park, one of the most rought & tumble neighborhoods in Minneapolis.

In the end, the HTC barkeep will probably leave, and the times at the HArd Times will get a little softer. But that doesn't mean the bohemian scene will dissapear... it'll probably just move a few miles away. Meanwhile, the downtown will be filling up with well-dressed taxpayers.
Posted by Bill Lindeke at 8:35 AM 4 comments: