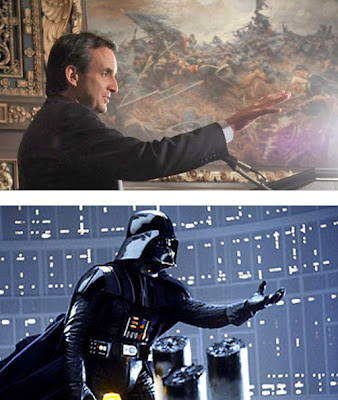 I've been rather easy on our governor over the years, bequeathing him with a rather benign and ineffective nickname: "Pothole Pawlenty."*

Yet latest round of Governor-induced Government destitution seems to call for a rather more harsh condemnation. First there's the cutting the very very poor people off General Assistance health care all for the sake of saving a few bucks for people making over $300K.

Second, there's the even greater slashing of the LGA funding, which as I've mentioned before, is a rather fore-sighted program that Minnesota instituted back in the 1970s to counteract some of the tendency toward regional inequality in the US.

See, what happened in most cities after WWII was that wealthy people increasingly moved to suburbs. These were schools with separate municipalities with separate schools, separate police forces, and often separate social service infrastructures. Well, because this new living arrangement left the great majority of the poorest people in the old cities, it was these cities that were paying for the bulk of care for the poor. It meant much higher property taxes in older cities v. newer cities.

[Rising property taxes since Pawlenty took over the reigns.]

You still hear this. One big reason that many people give for living in the suburbs is the low tax rate. The cities with the lowest property taxes in the metro area (like my home city, Mendota Heights) are almost always the ones with the highest average incomes. This is one of the reasons that property taxes are a bad way to fund government compared to income taxes. Inequality tends to grow under this system.

The state instituted the LGA program in Minnesota many decades ago, which is basically a kind of tax base sharing structure between wealthy suburbs and poorer central cities. It's one way to help alleviate the inequality. Without LGA, the difference in services in wealthy cities and poor cities [See list below] would be far greater. And that's the segregated future that we're headed for, where there is a huge difference between rich schools and poor schools, hospitals for the rich and hospitals for the poor.

According to Cam Gordon, the difference in Minneapolis's budget pre- and post-Pawlenty is pretty drastic:

With the Governor’s action today, on top of his previous draconian cuts to LGA, the City of Minneapolis receives 43 percent less from the State than we did six years ago. 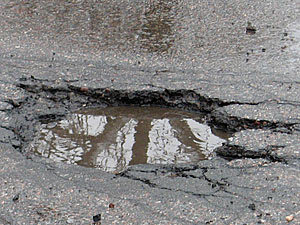 [A close-up of one of Pothole Pawlenty's cavity-filled molars. Img. fm MPR.]
This will mean more 'public-private' developments and streetscapes, places that are designed to cater only to certain exclusive private interests as cities look for other sources of money. It will mean far less ability of cities to design and implement their own visions of how to build and shape streets and parks. And it will mean a hell of a lot more potholes.

*Only the Fergus Falls Journal has picked up this nickname. You have to start somewhere.

(Examples of cities that pay into the LGA fund)

(Examples of cities that were just cut)

"Pothole Pawlenty."*
You've been calling him this for a while, I also like T-Paw and use it frequently :-D

You portrayed the topic well.. Especially the concluding paragraph and the mid section made a good read... keep posting...All the best.

Hello,
This an amazing information found here.... Keep posting such an awesome blog post. Thanks!

"Punk Energy" existed in Amerika﻿ in the 60's with the riots and bad attitudes it just wasn't articulated into a music untill the mid 70's.