Jazz and Traffic #1: The Jazz Bus 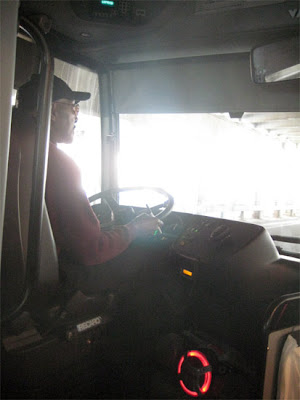 [Rob Thompson, the driver of the Jazz Bus, grooves to Horace Silver as he drives U students across campus.]

This great story in the Minnesota Daily about the "Jazz Bus" reminded me of that recently. The U of Mn runs a bunch of local buses that go back and forth from the Saint Paul to the Minneapolis campus, along the school's dedicated transitway. The buses are pretty straight forward, and free of charge, but there's one of the buses that's special. It's the jazz bus, and I'll let Matt Brickweg describe it:

I had never ridden on the Jazz Man’s bus before, but I had heard about it from multiple people. It turns out he has a long track record of credibility built up with students. He uses the music he plays to connect with his “captive audience” of passengers. I had heard from friends that he was so into jazz that he’s going to start a jazz radio station when he retires.

Even with this forewarning, I was still taken aback when I hopped on the Jazz Man’s bus. Numerous times he said goodbye to passengers and then gave them a courtesy honk as they walked away.

As I was sitting on the bus, the music stopped. The Jazz Man turned around, looked back at us passengers and said “Who’s feelin’ some B.B. King?” Smiles and nods ensued.

I have been lucky enough to find myself on it a few times, and since I love jazz, I always consider it to be a stroke of great fortune, like finding a golden ticket, or coming across an old friend randomly on the street.

The other day I was on there and the jazz bus guy was spinning some sweet hard bop. It was this driving, upbeat, blues-y piano stuff. When I asked him about it, he told me it was the Horace Silver Quintet, and that I should get the two great Silver albums, "Blowing the Blues Away" and "A Prescription for the Blues". They're both great albums, and as I rode down Washington Avenue, I was enchanted by the transit-jazz potential.

What if all buses had drivers who were DJ's, and who spun music to match the traffic patterns? On evening rides, you'd have cool, mellow music. When it was raining, you'd put on something melancholy. During rush hour, you'd blast some up-tempo be-bop. Mornings would be for brass instruments.

I was talking with a friend of mine a while back about the greatness of the jazz bus, and he told me that he'd memorized the jazz bus driver's schedule. He'd wait until he knew that the Jazz Bus was going to make its run, and then intentionally head to the curb and try and find it.

I think this idea has endless possibilities!

Labels: aesthetics, jazz and traffic, Mpls, transit, U of MN