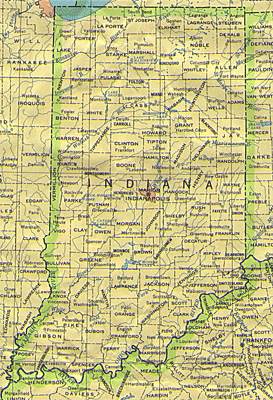 I was of the opinion that the upcoming political election was all about Iraq, tax cuts, corruption, and mammoth levels of incompentence.

But today I learned that the real reason the GOP might lose control of the house is an attack on that most sacred of American institutions: Daylight Savings Time.

This is from the Hotline:

In its latest independent expenditure filing, the NRCC just bought ad time on behalf of Rep. Mark Souder (R-IN 03) after conducting a poll in the district last week. The buy totals over $72,000 -- a relatively small amount. The Democrats have a self-funding candidate running, Ft. Wayne City Councilman Tom Hayhurst. But it's a solidly GOP district -- Pres. Bush won here with 68% in 2004, and Souder has won over 60% every cycle since 1998.


Three seats in Indiana are in play, and they currently boast some of the largest leads for Democrats over incumbent Republicans in the country. Daylight Savings Time -- the New Third Rail of American Politics.

This precocious tidbit (a blast from the past) is from my first ever post on the second website:

DAYLIGHT SAVINGS TIME is my favorite time of the year, mostly because it is so short. Most holidays, like President's Day for example, are a whole day long, and what am I supposed to do? I can only celebrate President's for so long before I get tired. And Thanksgiving and Christmas are even worse. I think everyone will agree that twelve days of Christmas are far too many days long for a holiday to be. So I like Daylight Savings Time because it's only an hour long. I suppose if it were like all the other holidays, it would be called Daylight Savings Day, but how relieving that its not?

Once while talking to a reliable source, I learned that they do not celebrate Daylight Savings Time in the state of Indiana. This leaves me impressed, but also befuddled. How can an entire state decide not to participate in a national event of this magnitude? I can see why some states might opt out of certain celebrations, an example being Columbus Day, which is sometimes a vacation and sometimes not a vacation depending on what state you're in. But, what can be more important to our daily lives than time, with its alarm clocks and digital watches? And what about the people who live on the border between Indiana and some state next to Indiana? Are they still late for work? On the news, do they have to say, "Well, don't forget to set your clocks back... unless you're in Indiana, and then you can go ahead and forget." It all leads to problems, problems, and more problems.

I would like to say to the people of Indiana that I respect your gumption. Its not easy, when faced with so many other states all acting together, to just sit back and say, rocking ever so gently in your chair, "Take this Daylight Savings Time and shove it." But don't you think its time to grow up? Look at all the time we're saving in all these other states, the very time that you don't get to save over in Indiana. Why not save some time with us? I bet if you tried it, you would like it.

But on the other hand, I can see your point, because Daylight Savings Time isn't as good as it should be. First of all, it is always on a Sunday, where nobody will notice it. So this year, I've decided to move mine to Monday, where it makes more sense. And it worked really well this morning. When I woke up it was already sunshine outside, which wasn't happening last week at all. And so I was a big fan of this Daylight Savings Time until I got out of work and it was dark. That ruined my day. I think they should make Daylight Savings Time twice as long, and put one on each end of the day. I know some of you math people might object to this, but don't worry because I thought of that too. I think we should just cut an hour out of the middle of the day, and put it on the end of the day. And my suggestion is 9-10 in the morning, when nobody works anyway. Go ahead and try to think of the last thing you did between 9 and 10, because I bet you can't think of anything. That way this holiday would really be something else.

Posted by Bill Lindeke at 9:25 PM No comments:

The Catalpas Have Spoken: Fall Has Fallen 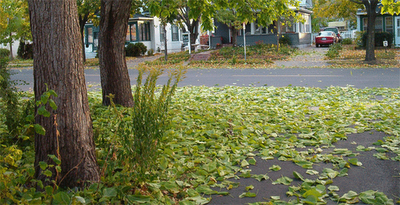 There are two catalpa "bean" trees in my front yard, funky herky-jerky trees with big fat leaves as big as your head and little bean pods hanging down from all about. These are strange trees, and their large leaves bud very late in the spring. It's practically the middle of June before you've got full foilage.

And I each year I think that those giant leaves will last through 'til November, like the guy who shows up five hours into your party and doesn't leave until 3 A.M., drinking the last remnants of a vodka bottle on your couch and talking on and on about how impossible it is to meet people in this town.

But the catalpa always surprises. Yesterday, when I went to bed all those big leaves were firmly attached to the tree, as per normal. Not a single one had de-branched. This morning, I kid you not, I walked out my front door and was stunned to find thousands of leaves on the ground. Almost the entire tree had jumped ship, taken the plunge, called it quits, jumped the shark, cashed in the chips, kicked the bucket, said sayonara, arividerci, Geronimo! I take my leave, good sir.

I got home today from work and there wasn't a single leaf left on those trees. Not one. Like lemmings, it was. I've never met a tree with such an on-off switch as these two. They're passive-aggressive, schitzophrenic. Sure it snowed a little. There were some flurries... but last week it was 80 degrees outside, and I was basking on the riverbank in the goddamned heat. And now I'm going to have to put on my snowsuit and rake about thirty cubic feet of leaves into bags and bricks of compost. 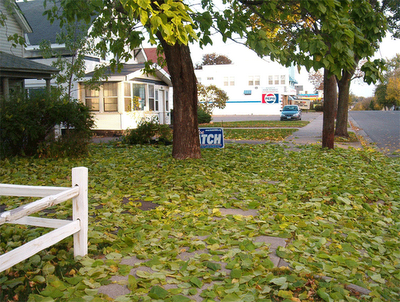 The University of Minnesota campus is plastered today wtih posters and chalkings advertising "Amps Against Apathy," a rally on the Northrop Mall tonight at 7:00 featuring "rock and roll" and "action." The event is sponsored by some group called "Democracy Matters," and I'm pissed. What do the rockers have against the apathetic?

That's why I'm announcing here on this blog a counter-protest.

APATHETICS ARE PEOPLE TOO:
A Counter-Protest for the Apathetic
Northrop Mall -- Friday 10/6 @ 7 pm

I've got some signs aready made... saying things like, "Apathetics are People Too!," or "Down with Care-ism." We're gonna be standing around, not waving flags, chanting "Hell No! We won't care," or "What do we want? ... When do we want it? ..."

Who's with me?
Posted by Bill Lindeke at 2:43 PM No comments: