[This content recycled from my now mothballed website, www.excitablemedia.com. Please enjoy!]
Out of town visitors are quick to discover the rigorous planning behind the Minneapolis city streets. The grid is most often alphabetized, usually numerologically ordered, always sliced ordinally and sub-ordinally by the points of the compass, and depending on one's tenacity, can even offer a chronological listing of America's presidents. Minneapolis, true to its Greek root, offers a veritable catalogue of cataloguery.

But to my mind the intersection of Lyndale and Hennepin Avenues seems to predate planning, their crossing unenviably misguided, always a traffic tangle of terrific proportion. Here, for more than a century, at the base of old Lowry Hill, has lain the intersection of Chaos Street and Order Boulevard. 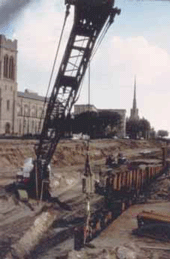 [Digging towards the Basilica.]
The modern challenges facing the transportation engineer shifted following the creation of the Interstate Highway System in the late 1960's, and gave a fresh twist to the Lowry Hill bottleneck, as Interstate 94 was slated to run right through the densely populated area. And while superhighway construction uprooted a great many neighborhoods throughout the metro, the buildings of Lowry Hill were, and still are, one of the Twin Cities' richest collections of Victorian homes, grandiose churches, public parks, museums, and the like. Hoping to minimize the damage, State Highway Department engineers spent three years and over thirty million dollars digging a 1,500 foot-long six-lane tunnel underneath the intersection, a triumph of modern engineering meant to decrease traffic congestion far into the future. While miniscule when placed next to the great tunnels of the world, those of New York City or Western Europe, the Lowry Hill Tunnel (LHT) was to be the last and greatest Minnesotan dig.

Building a tunnel is never an easy task, and perhaps the biggest LHT challenge was the Hennepin Avenue United Methodist Church, located right next to the tunnel's slated path. For three months during construction the church would be perched on a 35 foot drop-off, consternating engineers and preachers alike, and to safeguard against sacrilege the Highway Department hired the Mile High-Deilmann firm of Denver, Colorado, who buried a series of 87 tubes deep into the ground surrounding the church, in order to create a protective "freeze wall." The tubes, filled with circulating brine chilled to minus-five degrees, created a 120 foot long, 50 foot deep, 20 foot wide wall of permafrost that stabilized the ground underneath the church for three months during the most difficult stages of tunnel construction. Apparently it worked, because the United Methodist Church is still standing proud, despite the ever-present danger of being swallowed by the concrete on and off-ramps that swirl around it like Medusa's head snakes, bringing an almost uninterrupted line of idling cars to the far side of its stained glass windows.

When the tunnel finally opened in September of 1971, the Lowry Hill Neighborhood Association threw a tunnel party, inviting the public to roller-skate around in the tunnel while listening to a local rockers play in perhaps the best acoustic environment in the history of Minnesota. Nobody knows why the band never showed up, perhaps it was the cold, but balloons and cider flowed like wine as hundreds of people enjoyed the rare meeting of a long low yellow room and ample florescent lighting. As one long-haired youth put it, "it's like a big long shower room." When another replied, "it's like the high school I went to, it has the same thoughtful atmosphere," I couldn't help wondering which school he meant.

Today when our roadways bear the scars of the late 20th century automotive explosion, the LHT has become the shortest plank on the barrel, the point past which the commuter water cannot rise. Minneapolis traffic flow stops here, and the examples of LHT-related incidents form a long list indeed. In the most notoriously ironic anecdote, the Great Beer Rollover of '92, an intoxicated driver of a beer truck overturned his semi during rush hour on a shining June afternoon and caused traffic delays from Wisconsin to Minnetrista. And every workday drivers headed East from I-394 are forced to merge into a single lane before they enter the LHT, habitual congestion that rivals that of the globe's largest metropolises. Every few years the roadway pundits talk of widening the tunnel, but most of us know adding a lane is a pie-in-the-sky pipe dream.

[Under the hill.]
Yes, tunnels prove yet another piece of evidence that our ability to control the landscape has a limit, and like astronomers peering through telescopes searching for the beginning of the universe, Alfred North Whitehead's valiant attempt to mathematically explain the whole of logic, or the struggle to know the motives of a lover, the boundaries of understanding recede ever farther into the horizon, entropy always interjecting a last word, which is why on and under this particular patch of earth, double-decked automotive gridlock drifts along through the days.
Posted by Bill Lindeke at 9:17 AM

I love this quote:
"despite the ever-present danger of being swallowed by the concrete on and off-ramps that swirl around it like Medusa's head snakes"

I never knew that they opened up for Rollerskating, I'll have to ask my Dad if he was there for that, my parents lived in the Lowry Hill neighborhood during the early 70's and will be celebrating there 39th Wedding Anniversary on June 13th.

Great post, what happned to the rest of your readers?

That is a good quote! On-Ramp Medusa goes into the pantheon of auto-gods.

As for the readers, don't worry. They are out there.

This is my neighborhood. Fascinating about the UMC church. Glad it made it through the construction as it's an architectural beauty inside and out.