The Strangest Spot in Mpls 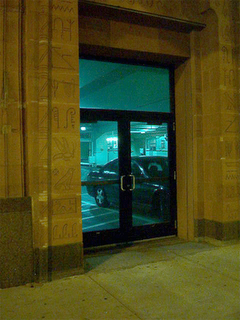 This old building is on the 500 block of Marquette Avenue, right in the heart of the central business district. It's a nice pre-war industrial building, with street-level storefront space, and a entranceway bordered with engraved heiroglyphs. At some point, though, the building was gutted and filled in with a parking ramp, so that now when you walk down Marquette you stroll past this Egyptian doorway leading to a concrete carpark.

It's hard to imagine a worse use for a historic building, except to have it razed and replaced with a surface parking lot. In fact, maybe this is a nice way for the car cult and historic preservation crowds to peacefully coexist?
Posted by Bill Lindeke at 11:38 AM 4 comments:

Signs of the Times 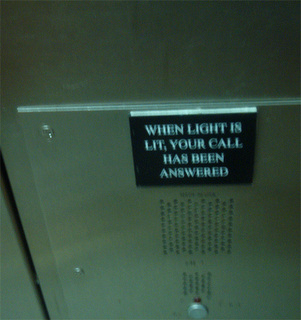 "When Light is Lit, Your Call Has Been Answered"
-- Elevator #1 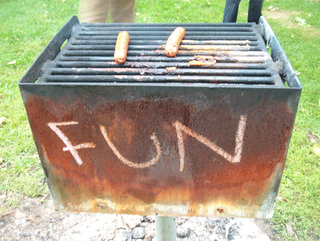 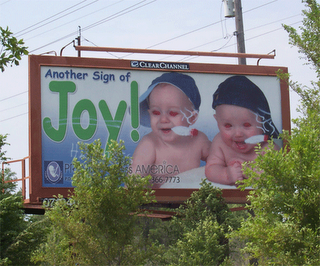 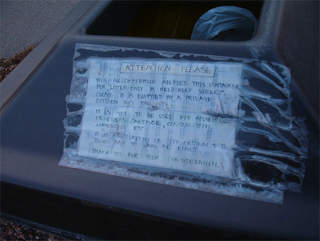 "Attention Please: Your Neighborhood Adopted ths Conatiner for Litter Only to help Keep Streets Clean. It is Emptied by a Private Citizen not the City. It is not to be Used for Excess or Household Garbage, Construction Materials, Etc. It is a Violation of City Ordinance to do so and You can be Fined. Thank You for your Consideration."
-- Outdoor Trash Bin 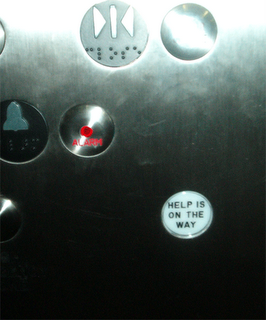 Labels: semiotics, signs of the times

I went to see the new Bond movie this weekend, and came away impressed. It's dark, witty, suspenseful, and twists and turns like kudzu growing on abandoned monkeybars. (There was even a fantastic scene with famous parkour star Sebastien Foucan.)
But, little did I know it was really the way things work. Here are stories from today's newspaper:

Excellent review of the film from the New Yorker, made better by the fact that it doesn't give anything away.
Posted by Bill Lindeke at 10:30 PM 4 comments: 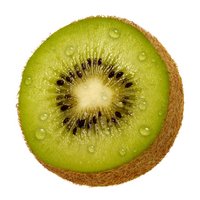 One kilo of kiwi fruit flown from New Zealand to Europe discharges 5kg of carbon into the atmosphere.

I don't know where that fact came from, but when I opened up my blog page it was written there, in black and white. (I'm serious!) Either I wrote it a long time ago and promptly forgot about it, someone managed to break into my website and fill it with kiwi tidbits, or some sort of nefarious kiwi-factiod internet bug has infiltrated the blogger software.

Regardless, it got me thinking about the burgeoning field of industrial ecology -- something that came up this week at school when I attended a lecture on measuring atmospheric carbon flows. Industrial ecology is the study of economic products as environmentally developed. In other words, there's a science to determining all the inputs and outputs that stem from a trade, production, and consumption. It's a way to integrate economic models with ecological theory, and it certainly seems like a good idea at this point in our global development.

But it's more difficult than it seems. How do you determine the (industrial) carbon impact of a given product? What is the true cost of a kiwi?

Carbon weight is a problem of scale. It seems self-evident that you include the carbon cost of transporting the kiwi from New Zealand to market. But what about the carbon cost of the machines used by workers who pick the kiwis? What about the cars driven by the workers who pick the kiwis as they commute? What about the carbon emitted by the factories that built the cars that the kiwi-picking workers drive? What about the cars driven by the car factory workers, and all the costs of transporting materials to and from that factory? A kiwi's carbon footprint can get almost infinitely large, as we include more and more levels of industrial impact. There's a science to this, but its not pretty, and its certainly not as clear cut as freshly-logged federal forest land. 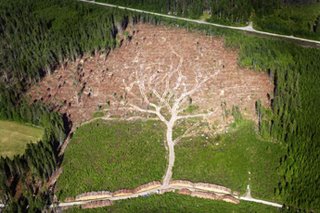 I have a friend who has been going around the country on what he calls a Zero Emissions Road Trip. He's trying to offset his carbon emissions from travel and consumption by negotiated improvements in carbon usage from people he meets. The only problem is that he, too, is beset by the difficulty of determining his true carbon footprint. Where do you draw the line? How many scalar orders of carbon do you include?
The science of climate change, and industrial ecology, are complicated solutions to our increasingly complicated economic and enviornmental problems -- the era of simple solutions is behind us.

The thought just occurred to me... What if we had a website where people could post their carbon relationships to kiwi fruit, moderate others' relationships and carbon connections, and negotiated a quasi-public understanding of the imapact of a single kiwi fruit on the earth.

Well? We could call it: Wiki-Kiwi!
Posted by Bill Lindeke at 8:43 AM 2 comments:

The higher numbers this year follow a 7 percent boost in combined bus and light-rail ridership in 2005, despite a 25 cent bus fare increase and some bus service reductions at that time. [link]

The state has been underfunding the transit system for along time, and it's been especially bad during the GOP years (post-1998). Add the cut that the bus system sustained a huge cut two years ago to the MetroTransit strike, and you should (and do) have one of the least-supported transit systems in the country.

But, despite all that, people are still riding buses in record numbers. And with the MVEST amendment passing last week, and a DLF (and Minneapolis) dominated legislature set to take over at the state, we might see some huge improvements in TC people-moving in the next few years. Not to mention the Northstar and Central Corridor systems in the works...

Yes, it's a good time to have a bus pass.

To make Nicollet Mall more pleasant for pedestrians and patrons at outdoor cafes, the mayor called on Metro Transit to drastically reduce the buses using the mall, keeping only the routes that use clean, quiet hybrid buses.

He also recommended returning Hennepin Avenue to two-way traffic to better serve businesses on both sides of the street and make it a "Main Street" for people who want to see the city from their cars.

The mayor has included $2.8 million in his budget for 2007 to get started on downtown street changes and continue studying prospects for streetcar construction in Minneapolis.

Streetcars, which are designed for short distance travel, can operate in mixed traffic and make frequent stops, would help make the city more walkable, Rybak said. Because the city does not have ready funds to build streetcar lines, which cost about $30 million per mile, he suggested paying for them by capturing the tax revenue from increased property values sparked by the streetcar lines.

This is much better 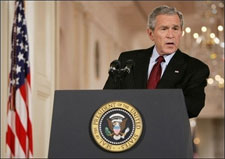 I am just watching the bush press conference, and it's like watching your aging grandmother forget where she lives. serious schadenfreude. Bush started off with the world's least embraced joke ("Say, why all the glum faces?" ... [20 second pause]). Bush then dropped a trope: He said, "it is clear the democrat party had a good night last night." If that doesn't sound important, you haven't read the Rick Hertzberg piece on the use of the adjective 'democrat' without the -ic. Well, go to it, and see how high this new verbal fetish has ascended, or how low Bush ahs fallen. Desperate times... &c.

As for the results, my first reactiong is to think about the way the DCCC candidates did poorly overall in this race. Here in Minnesota we had two really competetive House races, Bachmann v. Wetterling in the sububan/exurban 6th district open seat, and Gutknecht (6-term incumbent) v. Walz in the rural 1st district.

The former race was on the DCCC hotlist for many months, and Rahm's campaign commmitee poured a ton of dough into the race -- I think both candidates spent something like $3 million, which is a lot of TV ads. Meanwhile, Walz was chronically underfunded, vastly outspent by his incumbent opponent, and ran a campaign that relied on grassroots volunteering and internet fundraising as much as insitutional support.

And in the end, Walz won by a good margin while Wetterling was trounced. Now, you can say that MN-01 is not as Republican a district as MN-06, or you can say that Wetterling was never a good candidate and that Bachmann has a certian diabolic charisma -- you'd be right. But the fact is that Emmanuel's DCCC invested in the wrong race, and favored the wrong candidate. Here, the DC DLC crowd showed that they're not really in touch with voters.

And Minnesota is not the only place where that happened. The single race where the DCCC went out farthest on the limb was IL-06 (Duckworth v. Roskam), an open seat in Emmanuel's neighboring district. During the primary election, Emmanuel pissed off a lot of people by pushing his candidate, Tammy Duckworth, over local favorite Christine Cegalis.
Then, Rahm poured over $3 million DCCC dollars into the race, and made it the top stopping point for political stump speeches. And last night, Duckworth lost by 2% in an open seat in a big Dem year.

The same thing happened in KY-04, where the DCCC helped out ex-Rep. Ken Lucas. Again, he lost, while at the same time unheralded candidate John Yarmuth, an unabashed liberal, beat a well-funded incumbent with
very little DC support.

Whatever the significance, it just became a lot more fun to watch Bush press conferences. I think the media is going to suddenly find its spine.

Here's a response from an unnamed political operative... currently educating herself at the Sorbonne.

I'm lucky enough to be taking a class with Elaine Kamark (DLC co-founder) and David Gergen (White House advisor to every prez since Nixon except Carter and Bush II, also pundit) and so on occasions like this, I get a sort of unique insight of how the political elite look at these things.

Even Kamark, today, said she thinks that, in the end, Dean is going to get a lot more credit than Rahm will. Especially since so many Dem pickups were in very red states like Indiana - Dean's 50-state strategy, etc.

Both Gergen and Kamark think that TV is increasingly less important in campaigns. Not that campaigns spend less, but that the days of GOTV standing for get-on-TV are over. Have you read Applebee's America? If not, you must.

I think it's becoming more and more clear that the candidates (and on a larger scale, the party) that can win are those who 1. run real campaigns, and by "real" I mean campaigns in which you actually talk to voters and take field seriously and 2. are sincere. Michele Bachmann may be batshit-crazy in that Katherine Harris kind of way, but does anyone doubt her sincerity?

I've been thinking a lot about MN today b/c I think there's a lot to be learned from what happened there: not just in those two races, but in the Gov and Sen races too. some things I've been thinking:

1. It's really hard to beat someone with a compelling personal story. Walz has one. Patty should have one, but she didn't really seem to use it much.

2. I think you're right about the campaigns. Look at the difference between the campaigns that won vs those that lost:

Hatch: did the dude even run a campaign? As of this summer, he had two staff members. A gubernatorial campaign should be the standard-bearer, heading up the coordinated campaign, providing a sort of moral leadership. To be honest, I'm shocked that he got as close as he did to winning. Pawlenty ran a much better campaign, and I hate to say it, but he deserved to win.

You already said enough about Patty and Tim. Walz is also just such a good candidate.

The Dems have a really, really big opportunity now. Hope we don't blow it!