Sidewalk of the Week: Broadway and Penn 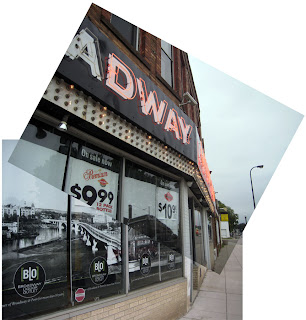 [The liquor store proudly displays the long history of Broadway Avenue in its windows.]
The sidewalks on Broadway Avenue are very nice indeed. They're new and wide, fresh and clean. The alabaster cities gleam.

Broadway Avenue in North Minneapolis is, of course, one of the most interesting streets in the city, and is the main commercial drag through the long-struggling Minneapolis neighborhood (many of the storefronts are underused today).

You can see the history of the neighborhood in the old buildings that sit along the street, and particularly at major corners like the Penn Avenue intersection. The street has a very central feel, as if the whole community comes together here. Plus, Broadway has gone through a streetscaping in the recent future, making it all the easier to visit El-Amin's Fish Cafe at the corner of B'way and Penn. 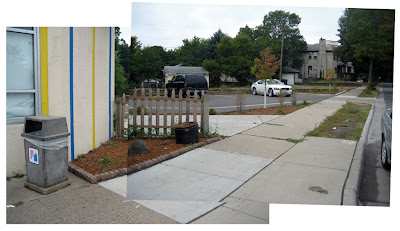 [Quite a nice sidewalk.]


But, despite the nice sidewalks, there seems to be an emptiness hanging over the intersection. Maybe its the mysterious, almost Saharan lack of street trees? But there's a lot of space at this strange 5-way corner. Everything seems paved, and it reminds me of the wide open parking-lot feel of my neighborhood (Como/Front/Dale). "Hello", you want to shout, hearing a distant echo reverberate from far across the car canyon. Walking out into the canyon surely is a fools errand? 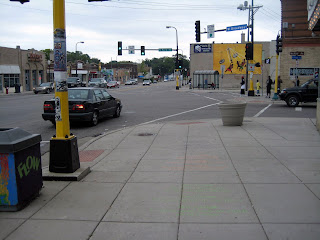 [Brand new sidewalks adorn the corner of B'way and Penn, sitting next to the four and more lanes of car traffic.]

A big part of it is the four-lane roads that run past, and the wide expanse of pavement. Despite the secure and comfy sidewalks, this is space for cars. And drivers realize this, and speed down the street. For some reason, its always the poorer neighborhoods that have the urban streets with four lanes that run like freeways (Dale Street in Saint Paul, Park and Portland in Phillips, Central Avenue in NE). This is true even though lower income neighborhoods are the most likely to have elderly and young pedestrians, and populations dependent on transit. I'm always surprised that more people aren't killed on streets like these.

[A mural over the Penn Avenue bus stop.]

There's a wonderful life to the space along Broadway, too. It's like there's an open-ness to the street, so that it doesn't seem to be claimed or filled in ... the hole of the donut (if you will.) There's a feeling that nobody is telling you what the streets should be used for. Unlike the overly symbolic spaces of many fancier neighborhoods, there is a freedom here that seems to open the sidewalks up to new kinds of use. Murals proliferate. Whether taggers or artists, a lot of the space is marked with paint, legible and trying to tell you something. There is a creative energy here, as if anything could happen. 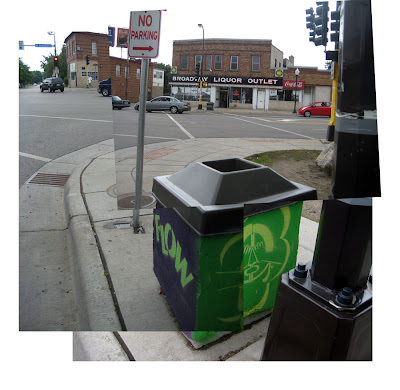 [The most highly decorated garbage receptacle in town.]

Or maybe I'm just nervous? When walking around the sidewalks of B'Way and Penn, I always try and fail to avoid a kind of anxious excitement. I can't escape a feeling of adventure that kind of bothers me. Maybe its because I'm from way on the other end of town over in Saint Paul, but more likely its the way that people always talk about North Minneapolis, as if its some kind of no man's land, a danger zone, and to go there is to embark on some sort of colonialist exploration of some new territory. 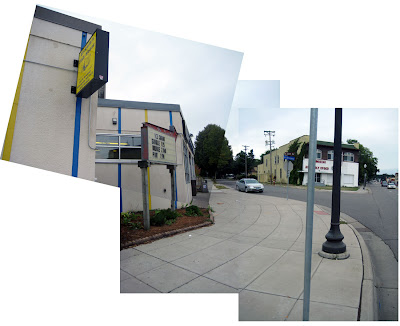 [The sidewalks around the Fish Cafe are wide and spatious. Somehow they still seem a bit empty.]

Geographer Neil Smith describes how real estate interests tie lower-income neighborhoods to the notion of the 'frontier', associating places like North Minneapolis (or NYC's Lower East Side) with the Wild West, empty space, or some kind of USS Enterprise-type exploration. The way people talk, when you go to North Minneapolis, you "boldly go where no man has gone before".
I, too, have this feeling when I head over to North. Its problematic, mostly because it suggests a lack. To view these sidewalks as unused or empty is to highly undervalues the kinds of culture and life that already exist in these neighborhoods. The very notion of "development" is kind of an implicit judgment on a place, as it the place isn't OK as it is, and needs to be "developed", "civilized", "revitalized" into something else more worthy and worth-while.

On the other hand, most people you'd ask who live in North Minneapolis desperately want to improve the neighborhood, make it safer, provide more local jobs. It's just a question of how these sorts of new activity and 'improvements' will relate to the valuable and valued activities that are already going on. This seems to be the crux of gentrification.*

Anyway, if there's an emptiness to these sidewalks, its not because of the space. It's because sidewalks alone can only do so much. They can connect people, they can make the streets safer, but they cannot generate an economically self-sufficient neighborhood. They're excellent sidewalks, but so much more depends on them. 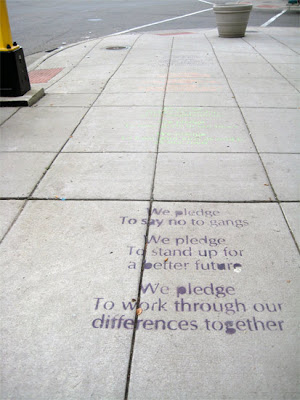 [You can't shake the feeling that the sidewalks of Broadway Avenue are trying to tell you something.]

*You hardly have to worry about gentrification during a receession.
Posted by Bill Lindeke at 12:07 PM

"*You hardly have to worry about gentrification during a receession."

Simply because no one is buyng high rise condo developments, there is still a glut of condos and apartments available and with the foreclosure crisis; you can buy a house for incredible prices; a good opportunity for high valued people to move into the area and invest in sweat equity for their neighborhoods.

Good analysis, but History would suggest that we dig further with north Minneapolis, many of us from the urban Studies program were told but often forget that the North Side had a strong Vibrant Jewish community that established many of the North Side's Commercial districts; these were all burned during the Race Riots of the late 1960's; these were volatile times granted, but these valuable assets were lost and many business owners who had gotten there start there, pulled out and fled to the suburbs.

The North Side has long standing issues and strong stereotypes that will take many years to overcome. However, that is not to say that there are families and residents who are holding on to everything they have in the struggles to keep their properties and their neighborhoods safe, livable, and a place for business to locate.