Classic Sidewalks of the Silver Screen #29 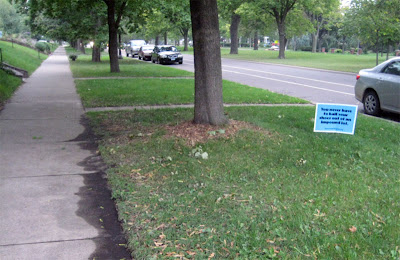 You never have
to bail your
shoes out of an
impound lot
[Yard on Summit Avenue, Saint Paul.] 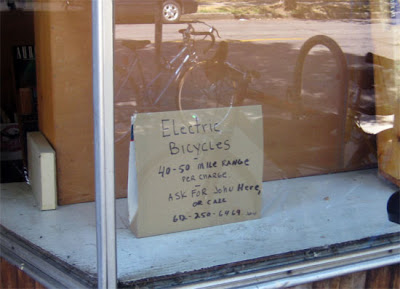 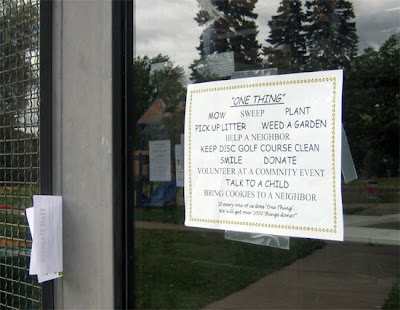 "ONE THING"
Mow Sweep Plant
Pick up litter Weed a garden
Help a neighbor
Keep Disc Golf Course Clean
Smile Donate
Volunteer at a Community Event
Talk to a Child
Bring Cookies to a Neighbor
If every one of us does "one thing"
We will get 1000 things done.
[Door in Morgan Park, Duluth.] 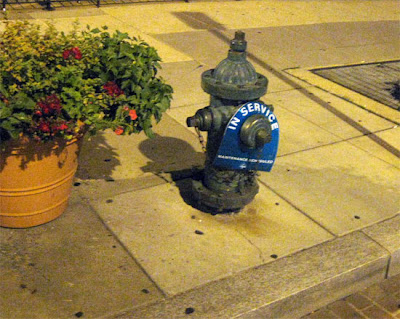 IN SERVICE
[Hydrant in Washington DC.] 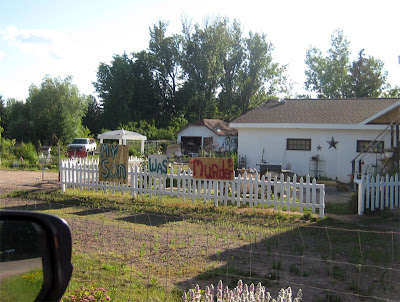 MY SON WAS MURDER ed
[Yard outside Ashland, WI.] 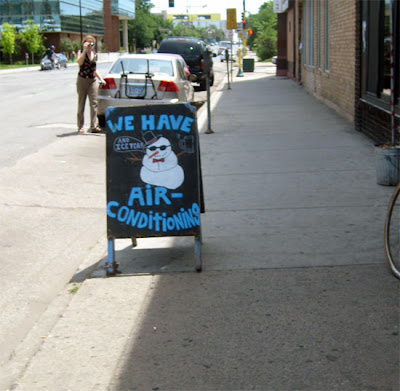 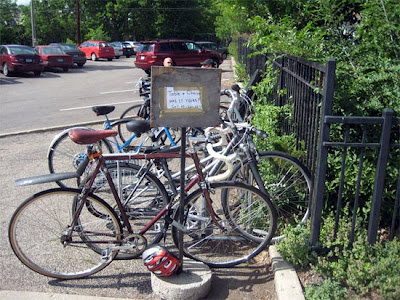 Labels: signs of the times

Sidewalk of the Week: 42nd Avenue and 38th Street

The first time you go to Minneapolis's Riverview Theater it's quite special. It's the feeling of winning the lottery, or finding a needle in a haystack. It's that feeling of something being very, very much against the odds.

Well, if I was a betting man, I'd have bet against the Riverview a long time ago. But somehow, despite everything, this building has managed to stay intact and strong this long, to be, along with Nye's, some of the only smoking gun proof of what happens when you mix interior decorating and LSD. 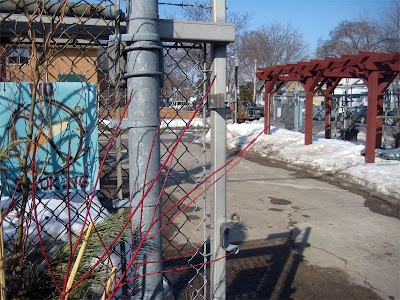 [The Mother Earth Garden store has a wonderful interface with the sidewalk, opening up and inviting passers by to enter its mystic wonder.]
I think of the chain of events that must have led to this awe-inspiring corner: the decision to remodel back in 1956, all the turns and twists of running a highly competitive business, surviving the low-rent era, surviving repeated showings of the Rocky Horror Picture Show, 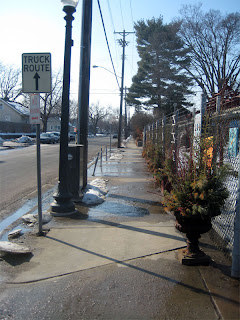 business models and start a indoor roller rink catering to Jr. High dances and derby dates. That moment when someone somewhere started to host neighborhood events at the theater. Think of all the moments when this theater could have disappeared. And yet, somehow it didn't.
Finally, all that cautious optimism paid off. Today, the Riverview theater veritably defines its surroundings. The Riverview shows 2 or 3 films a day, and more on weekends. It hosts screenings of just about every locally-produced film. Public meetings take place, and the whole neighborhood comes out and gathers there. Anyone with a house anywhere nearby gives directions by referring to the Riverview. The theater has spawned a pleasant (and very child friendly) coffee shop and winebar that shares its name. (All this is ironic, perhaps, because one can not, in no way, actually view the river from this streetcorner.) The cubic digital-esque marquee lights up the street every night. Midnight movies are a world unto themselves. 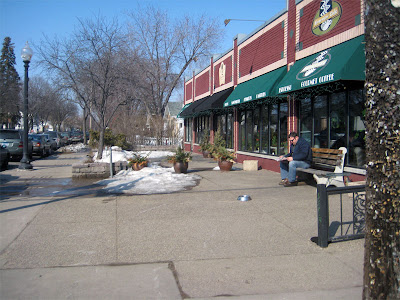 [The Riverview wine bar and coffee shop has a wonderful, wide, and inviting sidewalk.]
Today, the corner bustles, albeit in a very subdued and minimalist kind of way. The life of the street, and the neighborhood owes its soul to history's random chances, the luck of the draw, long years of struggle. Think of all the other local theaters that once sat in their neighborhoods like a raisin in a cookie. They are all gone, but the Riverview remains. If you ever find yourself walking East on 38th Street or South on 42nd Avenue, keep your eyes peeled. It's kind of like winning the lottery.

[The Riverview Theater's history ripples into the future like waves in a pond.]
Posted by Bill Lindeke at 10:17 AM 1 comment:

So... I found $20 on the sidewalk on friday night downtown. Have you ever written anything about the sidewalks as 'finders keepers" or as some kind of repository, where some people loose things and others find them? Just a thought, similar but different from people who put things to give away on their sidewalks which are free, since that is obviously intentional vs. losing something..

Yes, I love to find things on the sidewalk. Well, not always.

Once I found $100 while walking down Lyndale Avenue at night. Five crisp twenties. I picked it up, looked around, and seeing no one, shoved it quickly into my pocket and went home.

Another time I found an older iPod in a pink iPod case on the sidewalk over by Cedar behind Midwest Mountaineering. I posted an ad on Craigslist, with a photo, saying that whoever could name two songs on it could have it for free. Nobody responded, and I gave it to a friend of mine. (I don't think he ever used it.)

And one time I stepped in some dog poo.

Yrs,
Bill
Dear Bill:
Have you done any postings on heated sidewalks? I was going through Saint Paul recently and experienced a heated sidewalk for the first time (or at least the first time I even noticed). Near Market and Kellog, the sidewalk is heated by District Energy and there are some plagues describing the sidewalk. Hurray for heated sidewalks!
Sincerely,
Hotfoot McGillicutty
Dear Hotfoot:
No, I was not aware that there was a heated sidewalk in downtown Saint Paul. I guess I'm impressed at the engineering feat. I wonder, though, how they heat it. Do they heat it like the back window of your car, with little electric strips? Or, is there a subterranean steam tunnel like on University campuses?
Either way it seems like a waste of money! I'm kind of a Luddite.
Shovels and rakes? Yes. Good exercise!
Snowblowers and leafblowers? Loud and lazy! Sure signs of the apocalypse!

What's that you say? You don't like shoveling your sidewalks? You live on a corner lot? Your yard is the size of a small golf course?

Well, my ideal world would solve the unemployment crisis with sidewalk-focused makework projects, kind of like the old New Deal WPA, except everyone would be paid to be doormen, street sweepers, sidewalk shovelers, leaf rakers, gas pump attendants*, elevator operators. And they will all wear symbolic hats.

* Thank you, New Jersey.
Posted by Bill Lindeke at 9:37 AM No comments:

[Basically, the problem is that the best source of local streets & sidewalks news in Saint Paul is the Highland Villager. This wouldn't be a problem, except that its not available online. I'm reading the Highland Villager so that you don't have to. Until this newspaper goes online, sidewalk information must be set free.]


Total # of articles about sidewalks: 5
Total # of articles about sidewalks written by Jane McClure: 4
Title: Walgreens is back with bigger plans for Ford and Finn. New Highland site plan includes three buildings.
Author: Jane McClure
Short short version: The long-disputed battle over the new pharmacy on Ford Parkway continues. Walgreens is now offering to add a two-story office and retail building that would sit on Ford parkway. The other two buildings would be “designed to look as if they were two stories” … and the Walgreens “would have windows on all four sides with a combination of clear and opaque glass”. [This is total B.S. Go look at the CVS store at Snelling and University and see how it makes a mockery of local design standards. Windows that are opaque aren't really windows, are they? A second story that only looks like a second story isn't really a second story is it? -Ed.]
Title: Dayton warehouse dispute pits city against about everyone else. Local residents, business people support owner’s effort to store auto parts for nearby salvage yard.
Author: Jane McClure

Short short version: Article about the really interesting old industrial warehouses at the far North end of Ayd Mill Road (by Selby and Hamline.) The owner of the property wants to use thes old warehouses to store auto salvage parts, but this is against the city’s zoning code. Currnetly, the owner runs an auto salvage shop that is ‘non-conforming’, or grandfathered into the present use, which makes it very difficult to expand or change the business in any way. The article sets up a dispute b/w the local actors (lincluding chambers of commeze and the district council) and the citys’ zoning appeals board.

Title: The necessity of poetry in the public realm
Author: James McKenzie

Short short version: Editorial attacking Phil Krinkie’s editorial about how the city’s sidewalk poetry project is wasteful. The op-ed points out that no tax funds went to the sidewalk poetry project. , except for a little bit of tax funds used as startup feeder money back in 2008.Walgreens is back with bigger plans for Ford and Finn. New highlands site plan includes three buildings.

The long-disputed battle over the new pharmacy on Ford Parkway continues. Walgreens is now offering to add a two-story office and retail building that would sit on Ford parkway. The other two buildings would be “designed to look as if they were two stories” … and the Walgreens “would have windows on all four sides with a combination of clear and opaque glass”.

Short short version: A vague schedule for LRT contruction is out. Downtown StP comes first, Then: b/w Hamline and emerglad in 2011, East of Hamline in 2012. Univeristy Avenue will not be torm up from sidewalk to sidewalk, but will have through lanes. Also, “no area will be under major construction for more than 150 consecutive days.”

Short short version: Highland park near Ford Parkway and all around the Water tower now is festooned with security cameras. The St Paul police now has 185 surveillance cemareas. A police seargant is quoted saying “This is not big brother” because the cameras cannot actually look into people’s bedrooms while they sleep.
Posted by Bill Lindeke at 3:36 PM 1 comment:

Warming Up: The Big Picture 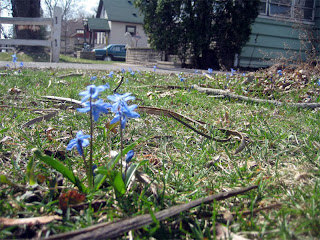 [These little blue flowers bloom in my front yard every spring.]
Here in the Twin Cities we're used to changing weather. Thanks to being in the middle of a large continent, we have some of the largest temperature extremes of any major city in the world.
After so many long winter months, hitting the mid 70's on April Fool's Day is the best feeling in the world. The sunshine hitting the skin on your arm. The warm breeze. No longer feeling like you have to retreat from the out-of-doors. It all adds up to the kind of high usually reserved for sherpas or space tourists.
But, just to keep things in perspective, it's worth remembering that Minnesota was not always this way. As a TA for a Bio-geography course at the University of Minnesota, I teach and learn about place tectonics, soil formation, and geology. And if you look at the big picture, 70 degrees in March is nothing to write home about. As recently as 240 Million Years Ago, Minnesota was very close to the equator, and had a hot, humid environment filled with rainforests.

[The location of the Twin Cities has moved during the past half-billion years, from the South Pacific to near the Andes to its present location in the North.]
For example, did you know that Minnesota used to be in the Southern Hemisphere? Don't get too excited about this recent spring warmup. Just wait a few hundred million years, and we'll really have something to talk about in the office elevator.*

[The location of Minnesota in relation to the Equator over the last few hundred million years.]
*... provided climate change does not kill us all.
Posted by Bill Lindeke at 12:47 PM 2 comments: