[Guided bicycle tour of five "dive bars" of South Minneapolis, focusing on the origin and future of dive bars in a part of the city historically inhospitable to them.
Thursday November 7, leaving from the Schooner Tavern at 6:30PM (the corner of East 29th Street and 27th Avenue South, by the Rainbow Foods).

A: This is a bicycle tour taking place in Minneapolis called "Noteworthy Dive Bars of South Minneapolis."

A: Cleanly defining a dive bar is difficult, precisely because dives are not very clean. It's a bit like Justice Potter Stewart's definition of obscenity. Here's what we know...

Windows - These are a minus. Dives eschew fenestration. What happens in the dive, stays in the dive.

Staff - Ideally, there's only one staff. Maybe someone works in the back. The more staff, the less divey.

Regulars - A must. When you walk into a dive, people should stop talking like in a wild west saloon and look at you a bit funny. Unless you are a regular, you really don't belong.

Pull Tabs - 90%. Meat raffles are also good. Best is when there's a pot of some sort of free food sitting on a table.

Nonchalance - Dives can't be trying too hard to make money. If they are, they're not dives any more. No fancy menus. No fancy paint jobs, etc.

"Craft Beer" - Nope, unless its brewed within a mile or two of the dive.

Food - Greasy or nothing. Heggie's Pizza is the hallmark of a dive.

Q: I thought there weren't any dive bars in South Minneapolis?

A: This is kinda true, sorta. South Minneapolis has historically been outside the city's "liquor patrol limits," an odd bit of historical chicanery brought to you by the city's well-off WASP reformers. There are, however, some exceptions.

We will be starting at the Schooner Tavern, located in historic "hell corner," and travelling to four more interesting dive bar locations in the sub-Lake Street city, including the last remaining 3.2 bar, a constitutional exception to the city' strange "five-acre" rule, an "endangered" dive, and a dive with decent food (for the hungry among you).

A: Yep. We'll be biking approximately 10 miles in total. Not too far, all things considered.

Q: It's November, you idiot.

A: I know. Wear a warm coat, gloves, and bring bike lights for the darkness.

Q: Can I come for part of it, but not hang out with you the entire goddam time?

A: Yes. I will be tweeting locations, there will be a quasi-schedule, and you can always call (if you're lucky enough to have my digits) to find out where the tour is at. Come just for one dive, or enjoy the whole diving expedition.

A: Yes, but buying a beer for one of the hosts is appreciated or (failing that) you can always support this blogger by purchasing an artisanal postcard for a reasonable and minimal fee. 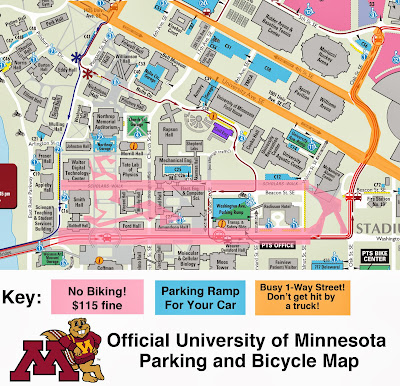 And once a year, like clockwork, the University administration celebrates this fact with its Bike/Ped Safety Month, where the campus police "crackdown" on scofflaw cyclists (while actual bicyclists get hit by cars on badly designed streets).


At the start of each fall semester, Parking and Transportation Services does a count of the number of bicycles on campus. Anyone who has navigated the sidewalks and streets on and around campus over the past month won’t be surprised to hear that there are more bicycles on campus than ever before.

Our fall bicycle count estimates that there are more than 8,500 bikes on campus. That’s an increase of 1,000 bikes or 13 percent over last year. The increased number of bikes, along with our on-going traffic pinch caused by the construction of the Green Line LRT, has resulted in a growing number of interactions between bikers and pedestrians that don’t meet the definition of Minnesota Nice. The number of collisions, near misses and skirmishes between vehicles, pedestrians, and bicyclists is unacceptable and for the most part, unnecessary. As of today, I’m calling for an end to the hostilities and am hoping we can learn to share the limited amount of space we have.

We have a saying here on campus: Safety is Easy; the Pavement is Hard. Follow these easy safety guidelines and you won’t have to discover just how hard the pavement really is:

Pedestrians: Take the buds out of your ears, get your nose out of your phone, and pay attention to the world around you. Cross with the lights, don’t walk in bicycle lanes, and stop texting while you walk.

Bicyclists: Riding on campus sidewalks is not allowed unless they are specifically marked as bike lanes. That means you must walk your bike on most of Northrop Mall, on the Scholars Walk, on the sidewalks on Washington Avenue, or any other campus sidewalk. In the coming days, the University of Minnesota Police will begin targeted enforcement activities -- writing tickets to bicyclists who ride on sidewalks in highly congested areas. These tickets come with a hefty fine of $98. Also, Minnesota law requires bikes to stop at stop signs and red lights. You are considered to be a vehicle when you’re on the road. You must act like one.

Drivers: Forty percent of bicycle crashes in the City of Minneapolis involve a driver failing to see or yield to a bicyclist. Drive defensively on and around campus, pay attention to marked bike lanes and bike boxes, and always look twice for bikers. Please remember that texting while driving is illegal, and that talking on the phone while driving on campus is just a plain bad idea.


Normally, I'd write a snark-tastic diatribe about Wheelock's condescending tone, the assumption that bicycles constitute "hostilities", and the U's Escher-esque approach to bike infrastructure. (In fact, that's what I've done in the past, many many times, during the annual Kafka-Thon.)

This time, given that the University seems to be turning over a new leaf, I'll simply offer my suggestions for how the U is getting it wrong.


The U of MN's Top 3 Bike Planning Mistakes

Mistake #1 - Focusing on sidewalks instead of streets

Typically, traffic safety campaigns equivocate between road users. The basic message is that everyone is at fault, everyone is misbehaving, and that we all need to be better citizens (or something like that). In reality, automobiles are by far the #1 cause of accidents, injuries, and deaths. The bulk of safety campaigns should be focused on forcing automobile drivers to drive safely in congested areas.

On campus, this would mean focusing attention on the places where we have the most accidents, and making dangerous car-filled streets safer for bicycles and pedestrians. The administration should focus at least 75% of its attention on calming traffic on University Avenue, SE 4th Street, Oak Street, Huron Boulevard and 19th and 15th Avenues. Those are the places where cars are killing people, injuring people, and making campus unsafe. This is where the danger lies.

For example, if the University administration built cycletracks on those streets, it would go a long way to reducing bike traffic on the rest of campus. I'd bet that it would do more to foster a culture of courtesy from bicyclists (suddenly treated with respect instead of contempt by the University's built environment) than a thousand emails from Vice President Wheeler.


Mistake #2 - Having a blanket ban instead of a focused ban

Even by their own standards, the University's current "rules of the road" are paradoxical.

On one hand, the official campus bike ordinance states that you should:


Never ride on campus sidewalks (unless designated as a bike lane with pavement markings).


Meanwhile, they also state that you must:


Watch for designated areas to dismount and walk your bike.


If bikes are banned on all sidewalks not explicitly marked with bike lanes, why do you need designated dismount areas?

The campus-wide sidewalk ban includes something like 90% of campus spaces, including almost every bike parking rack and quite a few Nice Ride stations. It makes no sense, and nobody follows that rule.

The campus should rescind its blanket sidewalk bike ban and replace it with a blanket "yield to pedestrians" rule, and instead focus enforcement attention on its few dismount zones, places like the Scholar's Walk that are chokepoints of congestion. Until they do this, nonsensical attempts at enforcement will be disregarded by anyone with half a brain. (Note: That includes most undergraduates.)

If you provide bike routes through campus, people will use them. If you don't, people will go willy-nilly all over the place.

As you can see from the map, the University's bike routes stop and start like a youtube video on dial-up.  (Compare to my "actual bike map" at the top of this post.)

Granted, there are a lot of challenges to creating contiguous bike routes through campus. The University -- with dozens of separate colleges, schools, departments, and administrations -- was not built with elegant transportation in mind. Buildings cut off many potential routes, posing large challenges for an actual bike system.

But until the University has contiguous safe routes that don't involve launching all bicyclists into dense car traffic, bicyclists will be forced to choose between their own safety and "breaking the law." That's not a choice that any young person should have to make.

With the construction of a few new bike paths, the University of Minnesota is making slow progress towards having a bike environment that doesn't cause people to bang their heads against the wall in frustration. (Note: If banging head against wall, wear a helmet!)  In the meantime, the current "bicycle crack down" seems like another page of Kafka, Goldy Gopher-style.

Labels: bikes, safety, U of MN

"[The city's streets] tell this tale of its foundation: men of various nations had an identical dream. They saw a woman running at night through an unknown city; she was seen from behind, with long hair, and she was naked. They dreamed of pursuing her. As they twisted and turned, each of them lost her. After the dream they set out in search of that city; they never found it, but they found one another; they decided to build a city like the one in the dream. In laying out the streets, each followed the course of his pursuit; at the spot where they had lost the fugitive's trail, they arranged spaces and walls differently from the dream, so she would be unable to escape again." 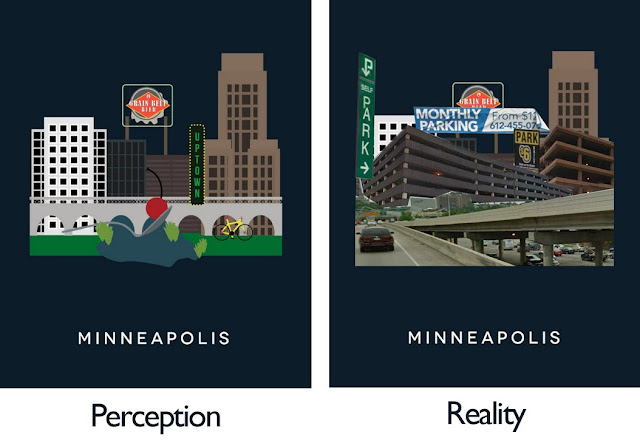 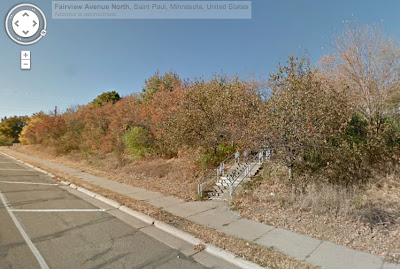 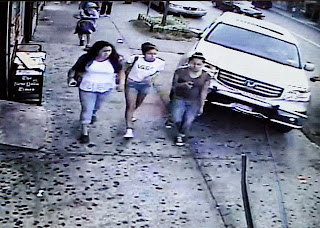 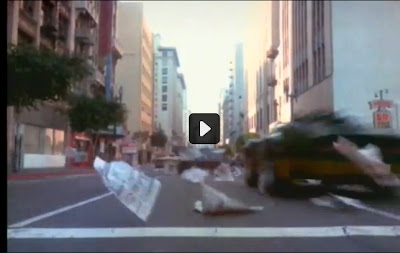 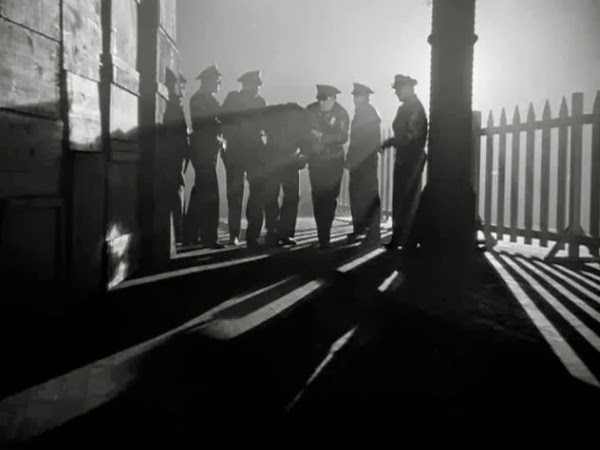 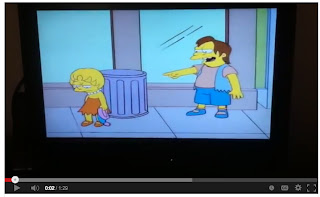 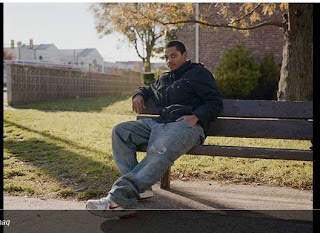 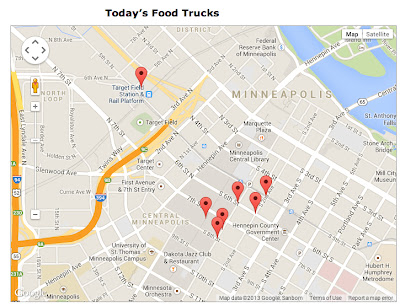 When George stops by Jerry’s apartment one day with a bucket of chicken and grease stains all up and down his tank top, Jerry is immediately disgusted. “Blech!” he cries from behind his sunglasses. He tries to give George a makeover, but nothing, nothing at all, can help the ugly George. Depressed by this revelation, George wears nothing but trash bags, but continues roaming the city with buckets of fried chicken. Jerry deems this “an improvement.”
[this] 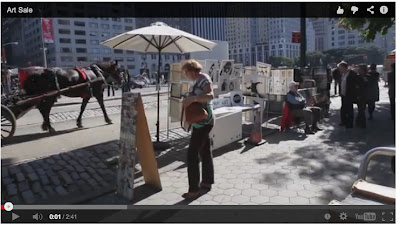 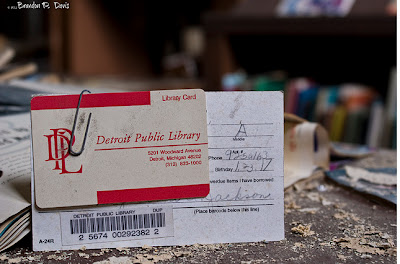 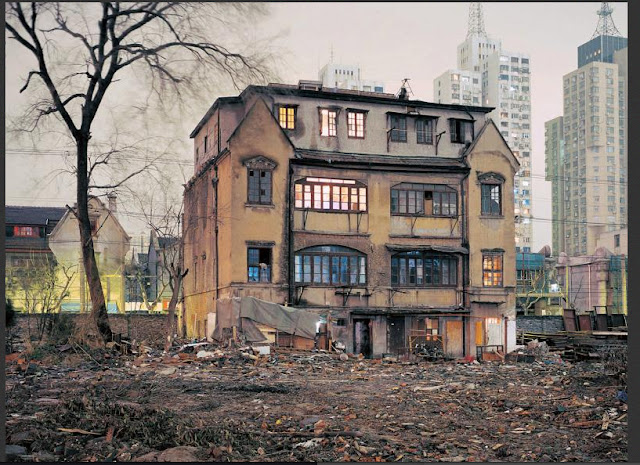 Posted by Bill Lindeke at 12:10 PM No comments: