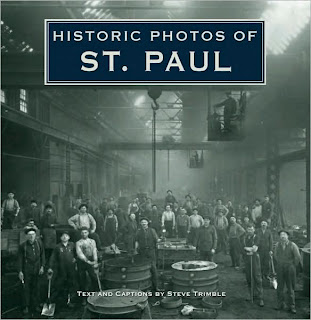 This is a great photo book that came out a year or so ago, that I thought I'd share with you. It bears the simple title, "Historic Photos of Saint Paul," and features exactly that.

Many many pages of Saint Paul back in the day, when people and streetcars ruled the day. It's a great book if you're incredibly nostalgia prone like myself.

The thing that capitivates me about these photos are how many more people you see out in the public and private spaces. Social life must have been far more dense, charged, and dynamic. The book is just filled with scenes of crowds and large groups. I imagine that every day was like the state fair, you were always in collectivity with other people, for better or worse.

The book had great images ranging from the first days of riverboat Saint Paul, all the way to the construction of the freeways in the 1960s. If you're looking for a good coffee table book, you could do a lot worse than this. There's a Minneapolis one, out there too.

(Of course, my favorite such book remains this one, from the New Press.) 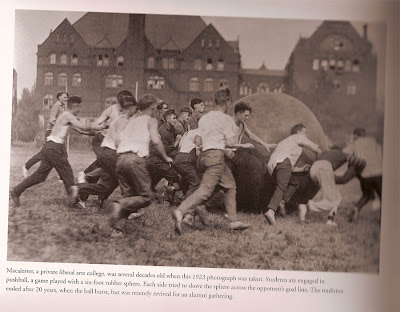 [Macalester, a private liberal arts college, was several decades old when this 1923 photograph was taken. Students are engaged in pushball, a game played with a six-foot rubber sphere. Each side treid to shove teh sphere across the opponent's goal line. The gradition ended after 20 years, when the ball burst, but was recently revived for an alumni gathering.] 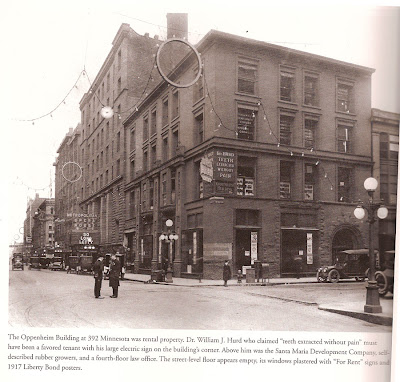 [The Oppenheim Building at 392 Minnesota was rental property. Dr William J Hurd who claimed 'teeth extracted without pain' must have been a favored tenant with his large electric sign on the building's corner. Above him was the Santa Maria Development Company, self-described rubber growers, and a fourth-floor law office. The building's street-level foor appears empty, its windows plastered with 'For Rent' signs and 1917 Liberty Bond posters.] 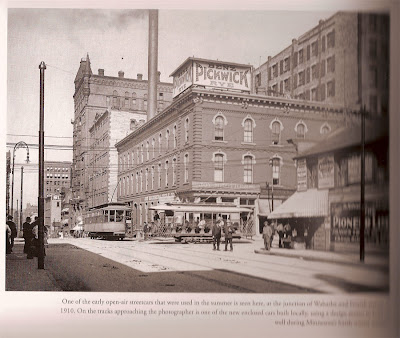 [One of the early open-air streetcars that were used in the summer is seen here, at the junction of Wabasha and Fourth streets, in 1910. On the tracks approachgin the photographer is one of the new enclosed cars built locally, using a design meant to hold up well during Minnesota's harsh winter weather.] 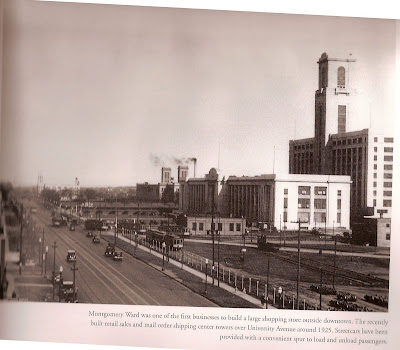 [Montgomery Ward was one of the first businesses to build a large shopping store outside downtown. The recently built retail sales and mail order shipping center towers over University Avenue around 1925. Streetcars have been provided with a convenient spur to load and unload passengers.]

To Heck in a Handbasket

Sorry about the long absence, but I told myself I wouldn't blog until my grad paper revision was complete, and I finally finished my draft last night. I missed all the anti-Hecker schadenfreude!

But I'm back now. And there are sidewalks to walk on.

Posted by Bill Lindeke at 10:53 AM No comments: