From Norman bel Geddes' GM-sponsored Futurama exhibit to mockups of Leibeskind's post-9/11 Freedom Tower, urban models have a profound influence over how we think about cities. For one of my classes at the U, I've been discussing with a retired computer scientist the relationship between current computer modelling and empirical (and/or reductionist) approaches to understanding social processes.

In particular, the relationship between experiment/empiricism and modeling is what intrigues me. I'm not suggesting that modelling has to supplant physical experimentation, but there are many cases where physical experimentation is impossible or unethical. Consider, for example, studying the way that industrial chemicals affect human populations. Doing tests on actual people is completely immoral, so we often test on animals and extrapolate (messily) to people with far less than certainty.

Similarly, studying cities isn't the kind of thing which easily lends itself to the methodology of experimentation. If you want to determine the relationship between social diversity and crime, for example, it is impossible to conduct a 'scientific' experimentation. One can only study existing structures.

This problem is magnified as one starts to consider problems with broader timescales. Think about the difficulty of looking at generational change, for example, the relationship between transportation infrastructure patterns and political activism.

I'm not suggesting that these sorts of problems allow themselves to be modelled either. These kinds of problems resist a great many approaches. However, modelling can allow us to perhaps see things, and include some level of empiricism, that 'traditional', experimental science cannot.

I have been reading a working paper by one of the leading urban modellers, Michael Batty, that offers up a theory of how models of cities have progressed and changed as computer technology has improved. Batty argues that models have moved from being "iconic" representations of idealized types of cities to "symbolic" representations which reflect empirically actual data. He writes that

Before the digital computer, models insofar as they were articulated at all for cities and city planning, were mainly iconic, built from traditional materials, and used to display 2D and 3D physical designs. Yet even in [early 20th c. planner, pictured above, Patrick] Abercrombie's time, there was a sense in which planning required more powerful tools and statistical techniques, hence symbolic models were implicit in that abstractions were used to symbolize the social and economic data of cities and display them in maps and charts.

Batty's piece, which you can read here, is a fascinating look at how new models are part of a long tradition of conceptualizing cities through representation. He includes some rather exciting looks at the possibilities of geographic data modeling and 3D urban rendering, as well as ways that complexity approaches to models, grounded in cellular automata or the interactions of many, many individual agents, can develop artificial cities according to various criteria. 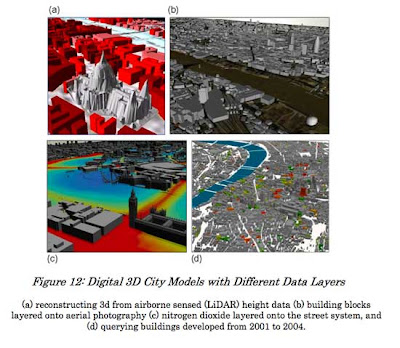 Sorry about the lack of posts, but I highly recommend listening to Garrison Keillor's nostalgic-but-thoughtful speech about historic preservation which aired last Friday.

Keillor mentions some of Saint Paul's greats (and my personal hangouts): Nina's Cafe, Swede Hallow, Connie's Creamy Cone... then ties this into a broader critique of today's skinflint modernism and mass produced architecture.
Posted by Bill Lindeke at 11:29 AM No comments: