The Two Downtowns of Maple Grove 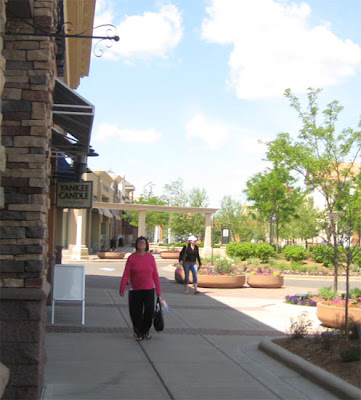 [A lady walks on the well-manicured sidewalks of one of the two downtowns of Maple Grove.] 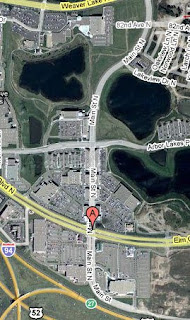 I've long been fascinated with Maple Grove, Minnesota, one of the northwest suburbs of Minneapolis. It's a 50K population city with a few corporate HQ's out past the beltway, and they've arguably done more than any other suburban Twin City to try to create a downtown area in the midst of the sprawl.

For example, the city built a semi-large shopping development area called Main Street, where the city lay down a stretch of well-sidewalk'd commercial space: a long stretch of one- and two-story retail, a new library, the city hall, and a few residential complexes in the distant background. 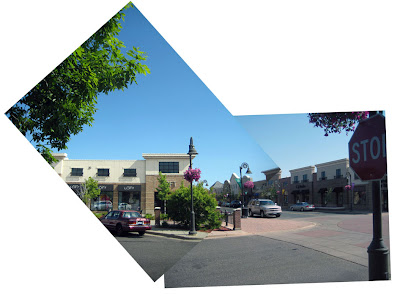 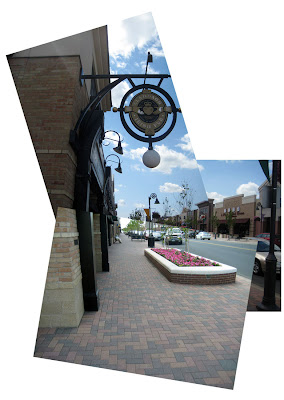 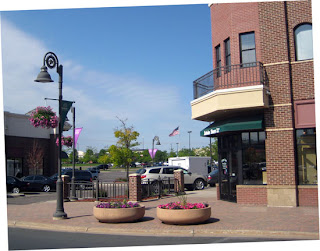 One criticism of the Main Street area would surely be that it is surrounded by parking lots. Commercial streets in the city are centers of density in the midst of residential neighborhoods, all connected to them by a network of trafficked sidewalks and streets. The Maple Grove Main Street downtown is pretty much an island in a sea of parking, shopping, and road infrastructure, so that if you look down the street past the edges of these buildings you'll see something akin to the Grand Canyon, or the blank wall of a nearby PetSmart or Best Buy. It gives the streets a strange feel of isolation that feels very different from a comprable place like 50th and France in Edina.

Or, on the other hand, if you look down the road in the direction of the big highway, you'll see Maple Grove's other downtown, the Shoppes at Arbor Lakes (and the big AMC movie theater), which surrounds the large parking garage that forms the Maple Grove Transit Center. The Shoppes is one of these new 'outdoor malls', a privately-controlled and privately-owned space the is meant to look like its a nice little village downtown. (There are similar efforts in Woodbury, and in similarly demographic'd cities all over the country.) It's a mall in the sense that it has all the private ownership structure, and all the stores are the corporate retail chains you'd find at a place like Southdale. But it's a 'downtown' in the sense that it is outside, has sidewalks, benches, a plaza, public events, and streets (with parking places) that run through its middle.

A criticism of this space would have to mention its lack of diversity of uses, and its private control, the way in which there's not much to do in this space other than go shopping. Also, I am assuming that there are more stringent restrictions on the kinds of speech and behavior that can take place, because the streets are privately owned by a single company.

[A decorated roundabout with ornate lamposts, hanging flowerbaskets, flowerpots, ornate brickwork, and a pillared trellis adorn the streets of the Shoppes at Arbor Lakes in Maple Grove.] 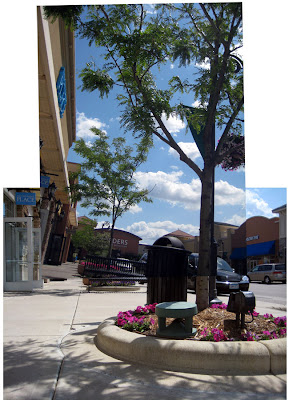 [A nice sidewalk tree with flowers and music speakers blaring commercial pop planted in the sidewalks of the Shoppes at Arbor Lakes in Maple Grove.] 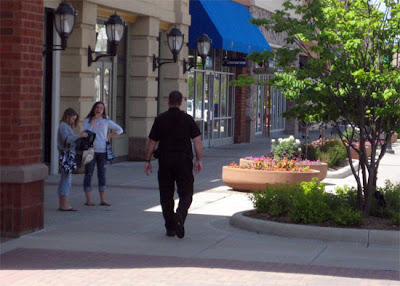 [A private security guard ensures the safety of teenage girls at the Shoppes at Arbor Lakes in Maple Grove.] 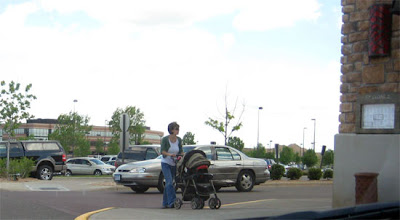 [A mother takes especial care crossing the street while walking from the parking lot to the Shoppes at Arbor Lakes in Maple Grove.]

Comparing the two downtowns, there's a way that they're not much different. They're both good 'new urbanist' sidewalk spaces compared to your traditional second-ring suburban space: they have 'public' spaces, they make you walk around, they make you encounter others people, they are attempts to bring some urban pedestrian life into the landscape of suburban auto-dependency.

Sidewalks shouldn't be limited to certain kinds of cities, or certain kinds of spaces (older spaces). They should be everywhere, because walking is interesting, fun and healthy, and people should be able to walk to and from their shopping malls, libraries, city halls, restaurants, and walk from place to place in Maple Grove. 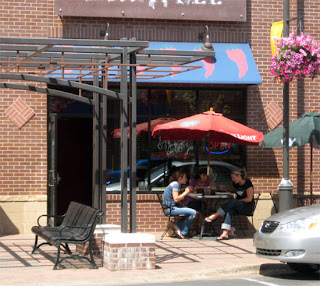 But these two downtowns are actually pretty different. The public Main Street has stores I've never seen before, and its streets have a very different sensibility. Some of the buildings don't just have facades of second storys, but actually do contain second story office spaces where (presumably) people like lawyers and accountants are working from 9 to 5.

There are sidewalk cafes (one or two, very small), and there's a Dunn Bros coffee shop. There are some decent restaurants.

Also, finally, there is a distinct lack of people in this Main Street (at least at noon o'clock, when I was there). For some reason (maybe because nobody lives or works anywhere near here), people don't tend to flock to Main Street during the day.

But I walked over to the private downtown (the Shoppes) and there were many more people going into and out of the Trader Joe's, teenagers hanging around, (mostly) women going into a few stores. There was a private security guard, presumably paid by the business owners to keep any unsightly people out of the privately-controlled downtown. (The public Main Street, on the other hand, hand, would probably have to obey some sort of free speech laws.) You definitely got the sense that there were very different procedures and rules for what kind of things could occupy these two superficially similar downtowns. The Main Street had a teddy bear sitting in a chair on the sidewalk. The mall street would never have anything that didn't match it's branding image. 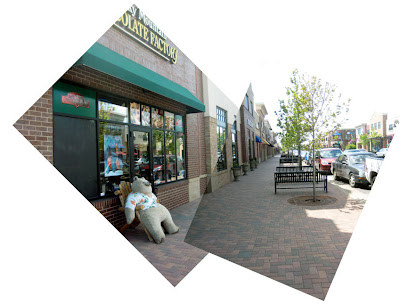 [A teddy bear sitting in a chair on the sidewalk.]

Or am I wrong? Is there not much that's different about these two spaces? There's a way that private control and private interest drives a ton of the ostensibly 'public' spaces in our cities, and (let's face it) Maple Grove isn't exactly the poster child for diversity. Both downtown areas were pretty much uniformly devoted to shopping, and I'm sure were equally policed, limited, and restricted in the kinds of use they encourage. Both were a far cry from the 'public' space you might find in South Minneapolis or somewhere like Richfield. 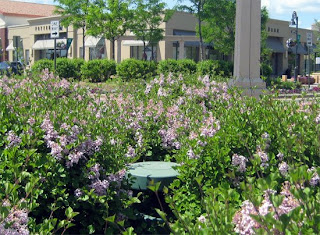 [The sidewalks of Maple Grove's mall main street are alive with the sound of music! (But only because some marketing expert programmed the speakers hidden in the flowerpots to play an endless loop of upbeat saccharine pop.)]
Posted by Bill Lindeke at 9:05 AM

Cool post, Bill. I live not far from the Main Street downtown in Maple Grove, and one of the reasons we moved there was because of the downtown. Sure it's a fake downtown, but aren't all downtowns fake to start with? Other ways it's different from sidewalks in South Minneapolis and Richfield - the sidewalks are wide, clean, and easy to navigate. There are trash cans everywhere, which is nice.

I guess I look at both of these efforts as far preferable to the giant big box strip malls we see in Plymouth, for example. At least there's street parking, sidewalks, and a sense of place.

I agree that there's a lot of good things going on here. I think the MG is headed in the right direction, esp. when the new library is finished. It's worth asking what would make these places better.

Call me Peter Pessimist - Both are completely laughable attempts at urbanism. That being said, the public ownership of Main Street and the apparently functional second story sets Main Street far ahead of The Shoppes.

The real folly of both developments (aside from the saccharine, uniform appearance as a result of construction all at the same time by the same developer) is that neither provide an interconnected network of REAL streets (not fake parking lot streets), a key tenet New Urbanism (and actual urbansim).

On a positive note, the silver lining of both developments is that it demonstrates that even people who prefer to live in a suburban environment want some sort of urban, main street experience.

Another point to mention about the Shoppes vs. the mainstreet is that after 8pm or so, the Shoppes become completely devoid of life. The mainstreet area, however, has some nightlife at the resturants that keep people milling about.

That's interesting. It's kind of similar to the office district / warehouse district split in downtown? Only replace offices with shopping.

I'd love to see them knock out the parking lots and use the space to create some streets and high density housing. That would be interesting :)

In a real downtown, parking is hard to come by.