Sidewalk of the Week: Milwaukee Avenue 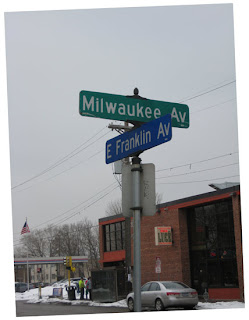 The great city of New York is in the midst of a political maelstrom this month over whether or not to institute a 'congestion pricing' in Manhattan south of 69th Street. The plan would charge people driving cars into the city $8, which would them be pooled and spent on improving the transit system. It's similar to Ken Livingstone's plan in London, which has proved relatively popular (at least in the city proper).

In New York, though, the debate is becoming quite fractious, and Mayor Bloomberg is spending a lot of political capital attempting to win over city Democrats and Upstate Republicans. The question is: is this a worthwhile fight to be having? How important is reducing the number of cars on the street compared to, say, better health care or housing the homeless? Why should we spend so much time and effort on something so small, so insignificant, so pedestrian as the making of good sidewalks? 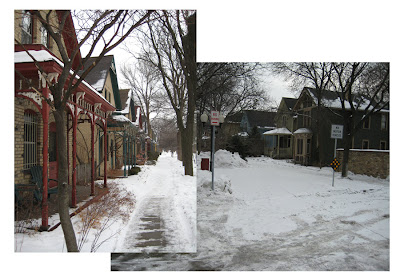 [One enters Milwaukee Avenue from a cul-de-sac, stepping off the curb into a magic land of pixie dust and candy canes. A unicorn skips by, and your footsteps smell like cinnamon.]
One of the reasons why its hard to answer this question is that there are so few examples of good, car-free sidewalks out there . . . It's like Henry Ford's Model-T color pallette: You can have any street you like, as long as its built for cars. How do you compare alternatives that do not exist?

A good example of the way this plays out politically is a recent community meeting in NYC's Washington Square, about a plan to pedestrian-ize a street near New York University:

Tuesday night's CB2 meeting on pedestrianizing Washington Place turned nasty. There were about a dozen or so residents speaking decidedly against restricting car access, including a couple folks who infused a lot of hostility to the entire discussion. Even though residents complained that it was being used as an NYU parking lot, they also loved the fact that you can always make great time speeding down this incredibly wide street.

Even the idea of taking away parking to plant trees seemed controversial to this crowd; they preferred the space to be taken from pedestrians. They were very hostile to the NYU presenters, and belligerent to the half dozen or more folks who thought more space for pedestrians was a good idea.

I hope this was simply a case of them hating the messenger (NYU) but not necessarily the idea of giving more space to pedestrians. Still, there were a lot of motorheads in the room. There was, however, a good showing on the pro-pedestrian side: George Haikalis, Barry Benepe, T.A. and a few others were there to fly the flag. Still, it's disappointing to think that this is the community that closed the leg of Fifth Avenue that used to run through Washington Square Park many years ago. Seems like the Jane Jacobs legacy was lost on this crowd. 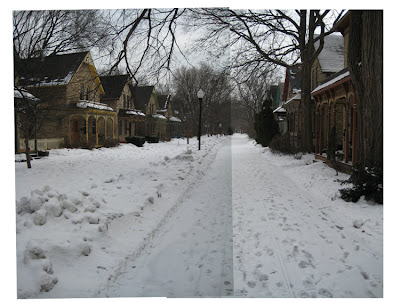 [Who am I? Why am I here? Where is this magic land where cars fear to tread? The houses crowd around you as you lean on the lamppost, listening to the soft sound of snow branchlanding, counting the number of steps on the path before you. If you're lost, you never want to be found.]
My point is that it's hard to envision a sidewalk without cars in it, whether you're in new York or in Minneapolis, which is why places like Milwaukee Avenue in the Seward Neighborhood are so precious. We are the sidewalk we've been waiting for.

The storied history of Milwaukee Avenue is surely known by now . . . an entire street of brick homes built on the cheap for railroad workers in an old pedestrian alley on (what was then) the edge of town . . . the houses fell into disrepair and were slated for demolition until a historic preservation group saved them in the early 70s . . . they've all been completely remodeled on the inside, with wall-to-wall carpeting, but on the outside they form this wonderful two-block pedestrian street in the heart of the dynamic, hippie Seward Neighborhood. A textbook example of a local sidewalk making good.

[Snowcovered cattails poke through in the wide yard, and birds chirp on the nearby branch. A bunny chews on a leaf, and a kitten purrs somewhere closeby. Hello snowman! Hello Bailey Savings and Loan!]
Take a walk down the street today, and its like stepping back into a past that never existed. A hush falls over the street, and you stroll down a tree-lined path, passing before beautifully painted porches with swings and snowmen and latent flowerbeds. There's a postage stamp uniformity, and yet each house is different and has character. The houses are set close together, and are small scale, but they seem to have yards and shared space. It's a full-size snow globe, and its really really strange when you realize that these houses don't have driveways. They're living in a world without cars. 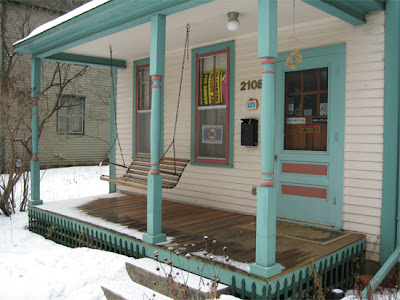 [This porch is painted in Victorian tones of teal and burnt cranberry. Like many of the homes, it has a swing for swinging.]
Of course, there's two sides to a world without cars. For whatever their reasons, architects and planners have been enamored for centuries with trying to separate pedestrians from fast moving vehicles. And in many ways they've been successful. Freeways, skyways, Washington Avenue Bridges . . . all keep people far from the Ford bumper.

Whole towns, too, have been designed and built around separate pedestrian paths, like this on on Milwaukee Avenue . . . Reston, Virginia [see photo at right h/t Art Deco Society], Greenbelt, Maryland, or even certain notorious housing projects boasted of their seperate pedestrian spaces built and designed exclusively for people. And for the most part, these kidns of space failed. People don't end up using pedestrian walkways nearly as much as you'd like. (I.e. find me a skyway that's fun to hang out in.) Like it or not, people come and go in cars, and somehow we need to get kneecaps and hubcaps to live in harmony.

Milwaukee Avenue is a great example, though, of a pedestrian space that works. And it works, mostly, because its in the middle of a dense, vibrant part of the city. There's lots to see and do on Franklin Avenue, and transit is good. I can imagine living in one of these Milwaukee Avenue homes without needing a car. It's an amazing place to spend some time, and hopefully, there'll be a lot more streets that feel like this in the future.

[The end of the Milwaukee Avenue: a bench, mailbox, and properly labeled trash bin huddle together as a children's jungle gym waits in the corner for warmer days. A nice place to sit and watch things other than cars go by. But what?]
Posted by Bill Lindeke at 11:22 AM