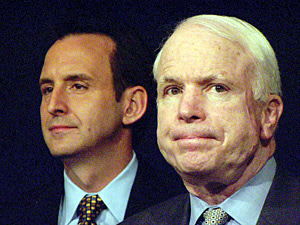 [image from MPR]
The story so far:
So, what happens now?

A possible $47.5 million hole in the budget of the Metropolitan Council will likely lead to fare hikes on buses and trains at a time when ridership is booming, the agency's top official said Tuesday.

G.R. Anderson Jr. over at MinnPost had an interesting story on recent testimony by Met Council head Peter Bell, one of Pothole Pawlenty's less terrible appointments. It rather surprised me, because Bell appeared to be castigating the Governor's budget proposal, charging that it would dig MetroTransit (run by the Met Council) into another huge budget hole.

Peter Bell, Pawlenty's chairman of the Metropolitan Council, offered up a bleak picture of what could happen if Pawlenty's proposed budget cuts to Metro Transit were to come to fruition.

Bell offered a PowerPoint presentation that showed Metro Transit will be running a $1 million deficit in fiscal year 2008, and a whopping $28 million to $40 million in 2009, if all revenues and expenses stay as-is. "How did we get to this point?" one slide in the show asked. Some answers, among many, were a decline in the motor vehicle sales tax forecasts, commitments to funding the Northstar commuter rail line and, at the end, "Governor's Budget Cuts."

In an era when transit ridership is a crucial part of fighting greenhouse gas emissions, gas prices are increasing very rapidly, and ridership demand is growing, Pothole Pawlenty is trying to force the agency to increase fares and cut service, yet again. And this time, his very own appointed Met Council commissioner is calling him out on it.

Even more worrying, the move might jeopardize the Central Corridor light rail project by changing the transit calculus for the always-important Cost Effectiveness Index (CEI), the formula by which the federal govt' decides which transit projects deserve investment.

"The FTA will not fund any transit expansion if we degrade our bus system," Bell told committee members. "If we are raising fares and cutting routes ... they will not fund 50 percent" of the costs for these and other projects. Which means delays, if the projects ever happen at all.

So for now Bell and lawmakers are looking for other solutions, partnering with counties for funding and the like. But perhaps just as startling as the money issue was Bell's seeming willingness to go against the grain with the governor; he's long been viewed as a Pawlenty acolyte.

This is on top of the fact that current versions of the state budget don't adequately fund the state's portion of the Central Corridor. According to a source, both Pothole Pawlenty's budget proposal, and the DFL version of the same fund $70 million for the Central Corridor project, half of the required amount to guarantee federal dollars.

At some point, someone is going to have to find another pot of money for the Central Corridor.

One would have thought that transit would stop being such a political football in times like these, when alternative energy projects are on the front burner, and reducing climate change has become a widely-supported political project.

Transit is one of the best ways to reduce global warming gas emissions. According to this recent study, not only does it reduce the overall miles traveled, but transit encourages dense communities, creating land use effects that reduce greenhouse gases even if you never take public transit a day in your life. In other words , more people taking transit means more shops, homes, and office are located closer together. That means that everyone's climate footprint is smaller in a transit-oriented world.

Making further cuts to the Twin Cities transit system now is a crazy idea, particularly since Pothole Pawlenty's Transportation Department is shutting down bridges left and right. Let's hope that Metro Transit doesn't get the short end of the stick yet again this year.
Posted by Bill Lindeke at 12:12 PM

Truthfully, one of the worst roads in MN over the last 5 years or so was the 35E corridor from dt St. Paul to the river bridge, along with the Ayd Mill ramps.

Those roads would have been heavily travelled by any RNC goers this year, but have now been repaired.

It'd be real interesting to know whether those road repairs were scheduled before or after the RNC plans were made.

i used to drive that stretch all the time from my mother's house growing up. it's actually a really interesting bit of freeway, historically speaking, what with the legacy of political "compromise".

i remember reading a book about roadtrips one time where the author called it one of the better freeways in the USA re: minimizing the impact on its surrounding community.