Sidewalk of the Week: Hamline and Randolph Avenues 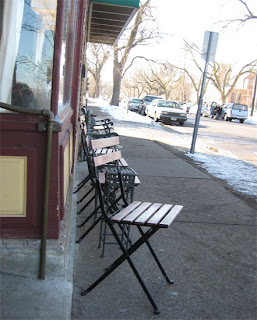 It might not look like it, but there's a small world hiding on this one little corner of Randolph and Hamline Avenues in the middle of Saint Paul.

I'm sure I've driven past it a hundred times, and never given a second glance to this little jumble of brick buildings, lurking on an innocuous corner between Highland Park and West 7th. Even after a friend took me to The Nook a few years ago, I would drive past this spot and fail to see the beauty within. Even after another buddy, a total latte-art-pouring coffee snob, told me that I had to go to Kopplin's Coffee on the corner of Randolph and Hamline . . . I drove past this block three different times looking for a coffee shop, before giving up. I never for a moment thought that this one little huddle of buildings contained lifetimes of experience.

I was wrong. This one corner, known as "Ran-Ham", houses a supermarket, a consignment store, an antique furniture store, a Catholic icon store, a really good coffee shop, a basement bowling alley, a whole bunch of second-story apartments, AND one of the most sought-after places for a beer and burger in the entire Twin Cities. In fact, all of these things are available in this rather plain-seeming corner in the middle of Saint Paul, within the walls of this rather normal clump of buildings. And all of these things can be found on a footprint that would fit comfortably inside a SuperTarget parking lot.

Don't believe me? Look for yourself! 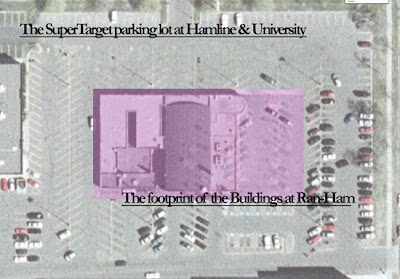 It's a goddamn miracle! (Which may explain the pictures of the pope that adorn the inside of The Nook.)

[The sun shines over a goddamn sidewalk miracle. Friend, you've got to believe!]
No, this little cluster of buildings manages to pack an entire microcosm of culture into a streetcorner the size of a travel thimble, here in Saint Paul across from Cretin-Durham Hall, the large local Catholic School. In fact, Ran-Ham is probably the poster child for those little "neighborhood-y" shop corners that give Saint Paul its local, small town feel. 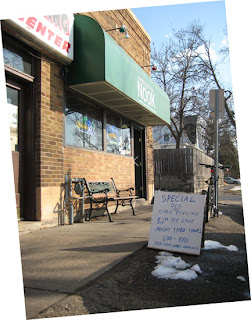 So the Catholic school across the street explains the Catholic Books & Gift shop. But then you've also got Kopplin's Coffee Shop, home of not one, but two Clover coffee machines, and these two little stores occupying a pair of symmetrical butterfly-wing doors that open onto this little stretch of sidewalk.

The sidewalk outside is impeccable, as the coffee shop keeps a few chairs outside its big picture window, so that coffee lovers can sit and maybe watch the baseball game across the street. Or getting that wonderful schadenfreude feeling of 'non-queue-ing', that comes from gazing at the omnipresent mass of people waiting for a table at The Nook, the nextdoor burger joint. And somehow, the door between these two staples of imbibery houses the Ran-Ham Bowling Alley, itself an exercise in spatial thrift. The alley keeps a hand-written sandwich board sign out on the street that fits nicely between the sidewalk chairs, endtables, picnic bench, and cigarette butt hopper.

(And I haven't even mentioned the cluster of buildings across Randolph Avenue from this little clump, the corner that houses an old-school barber shop, The Copper Dome breakfast restaurant, and a dine-in/delivery pizza joint called Classic Pizza.)

[The Nook-side alley is a very important part of the pedestrian puzzle, providing space and access and light and vantages for all involved.] 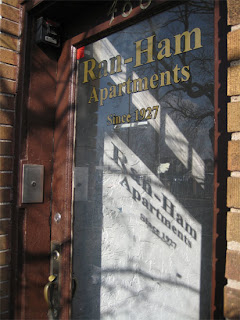 Sidenote: Perhaps this is a good time to question the Saint Paul convention of identifying neighborhoods by juxtaposing the first syllables of the nearest intersecting avenues. E.g. The "Ran-Ham" neighborhood, a name that rolls off the tongue like previously chewed fudge?

There is also the Snell-Ham (Snelling & Hamline) and the Lex-Ham (Lexington and Hamline).

It's enough to make me very concerned.

Should the corner of Snelling & Selby be known as Snell-Selb?
Should there be a Sum-Cleve at Summit & Cleveland?
A Thompson & Victoria "Thom-Vic"?
A Jefferson and Cretin "Jeff-Crete"?
The SuperTarget at Uni-Ham?
What price dignity?

What saves the Ran-Ham, in my book, is Korte's, the awesome neighborhood supermarket that has managed to somehow survive in an era of ever-larger food consumption. This is a store that people can actually walk to without crossing an ocean-sized parking lot, and they can actually leave while carrying fresh groceries home in a bag to make for dinner on their own two feet without feeling like Lawrence of Arabia parting the Red Sea.

Plus, it has wide windows through which passers-by can look in and gaze at the backside of a meat counter, watch the dude who scans the groceries. We can only hope that Korte's survives the impending Trader Joe's. 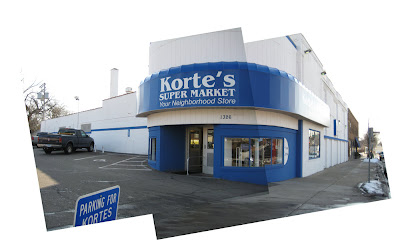 [The don't make 'em like this any more. The color scheme is remarkable!]
Time and again, I've found that neighborhoods surrounding Catholic churches and schools are the best around. Maybe it has to do with respect for tradition, or hearing the sounds of bells, or a desire to live close to an institution . . .

But the little corner at Ran-Ham is a pint-sized package of fun. Picture yourself going bowling ten frames while sipping a single-sourced espresso, enjoying a delicious burger and rosary combo, or finding the perfect spot for your sack of just-bought vegetables in an on-sale antique buffet.

Do we really need more retail space than this?

There's a steep price to be paid for having a big-box building full of everything nearby. You have to put up with gallons of gas guzzled, tundras of asphalt, long walks through frustrated parkers competing for fractions.

Granted, Ran-Ham's Bella Galleria Consignments isn't going to have a Nintendo Wii, but there's more character in this one fraction of a block on Randolph and Hamline then in the entire Mall of America. And that's why you, the small corner at Ran-Ham, are today's Sidewalk of the Week. 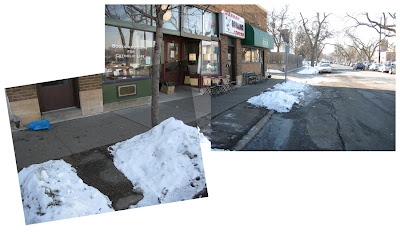 [This is the sidewalk equivalent of comfort food.]
Posted by Bill Lindeke at 10:37 PM

I'll never forget when my friend Mark Vesley and I ventured down into the Ran-Ham bowling alley for the first time. We felt like we'd walked into mid- to late-40s -- perhaps early 50s -- America. It was uncanny to the degree that we felt set up, like Alan Funt was going to come out from the pin-setter's nook and say, "Smile!" Adding to the affect was the sudden appearance of a small group of Catholic boys with their crewcuts and school uniforms. They were just there to bowl, but it felt like they were part of our entertainment -- that just for us, the establishment had created the illusion that we'd been dropped into a past we ourselves were too young to have known, having been born in the 60s. I myself often feel that visiting certain parts of St Paul is like time travel. I grew up there -- first near Como Park, then the Snell-Larp neighborhood. I've never shaken the perception that everyone in St Paul got locked in time when I left.

Oh my God! Please, anything but "Snell-Larp"!

I've been getting my hair cut at Schmidty's for the past couple years. No pretensions, and if you're not somewhat descriptive, you run the risk of walking out with a boxer haircut (short up the sides, a bit longer on the top), but otherwise it can't be beat. Standing at the fence watching a few minutes of a baseball game with the smell of shaving lotion wafting off the back of your neck is a fine St. Paul feeeling. :)

Nice write-up of one of St. Paul's great corners.

Great post! My wife and I moved in down the street from this corner about 6 months ago and have loved the neighborhood (and subsequent sidewalks). We walk to Korte's at least once a week for errant groceries, and I can't imagine the neighborhood without it.

Cool site, and great idea. Keep up the good work.

I live in the apartment above the barber shop. this is creeping me out.

At the corner of Grand and Fairview (another nice corner, at least the south side) is the Grandview Theatre. Guess why they call it that?

Speaking of theatres, Korte's supermarket actually occupies what was once a theater. You have to look closely from the street or the alley, but if you look at the aerial view it is obvious. Before television, something like 65% of Americans went to the theater at least once a week, and there was a theater on nearly every main street corner. By 1965, that rate was down to something like 10%, where it has stayed since, and with the prevalence of car-accessed multiplexes, most small theaters have closed. Yes, cars and television killed the theater quite quickly. There great information at the website movie-theatre.com, although it could use better maps and design.

Finally, you should, at some point, consider the "Ran-Ham Challenge." It consists of a day at Ran-Ham: breakfast at the Copper Dome, a shave at Schmidty's, lunch at Classic Pizza, a snack at Korte's, a game downstairs and then a Nookie Supreme at the Nook. Can your stomach handle it?

To add to my last comment, here is the map of theaters in the Twin Cities: http://movie-theatre.org/usa/mn/minneapolis/Minneapolis.pdf

Thanks for the great suggestion. That is one challenge. I've still never been able to get to Ran-Ham lanes while its open!!

This won't succeed in reality, that is exactly what I think.

I go to the school across the street and it is a really awsome conner. The coffee shop went out of business and was split between a floriest and the other half is being built into a malt shop.

it didn't go out of businesss, it just moved over to Marshall Ave (near the river). it's still awesome!