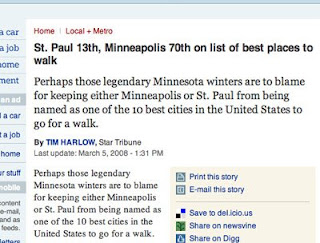 You might remember that a few weeks ago, Prevention Magazine inexplicably ranked Minneapolis the #70 "Best Place to Walk in the U.S."
Obviously, I've got a few problems with this ranking.

First of all, it must be said that the Prevention Magazine walkability rankings website is terrible. According to my scientific criteria, it is the #659 Best Usability for a U.S. City Rankings Website in the U.S., coming just after the "Top 10 Shuffleboard Cities Website 1996" rankings and the "Best Airport Bathrooms for Cruising 2000 Rankings Website".

It's so terrible! Completely impossible to read. An ADD-prone kindergarden class with 4800-baud modems could easily do better. It wouldn't even require infinite monkeys with infinite typewriters . . . 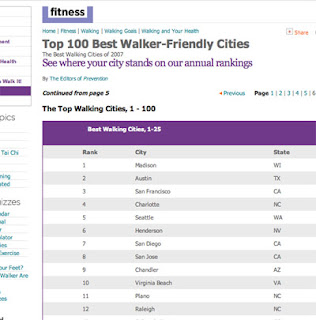 [This is literally the worst "professional" website I have seen in the current millennium.]

This is what Prevention Magazine and the American Podiatric Medical Association used to make their rankings:

The #1 criteria was what they called "expert ratings", where cites were ranked on a #1 - #4 scale for walkability by a group of experts.

Then there were these criteria:

Some of these ratings are very dodgy. For example, the "fitness walkers" score, or the "pedestrian fatalities" score. 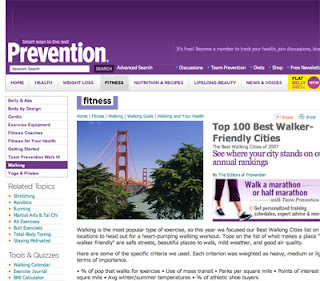 Cities with high income, a lot of tourists, or good weather are far more likely to have people who walk for "fitness", rather than people who walk because they need to. And cities with higher total numbers of pedestrians are far more likely to have more pedestrian fatalities overall. For example, a very unwalkable city would probably have very few pedestrian fatalities, simply because nobody would ever walk in it.

The kinds of things they should have studied are: amount of sidewalk space, and actual social pedestrian behavior. There must be someone, somewhere that is counting the number of people out walking on the streets, no? The American Time Use Survey would be a very good place to start. That's a longitudinal survey where large numbers of people fill out exactly what they do during a given day, using very specific codes. (Though the Bush Administration is threatening to cut its funding.)

Also, some controls should have been added for spaces that are very highly walkable, e.g. the resort areas v. places that are totally unwalkable, like most of suburbia. The overall distribution of walkability should matter. There should be a difference between people going on many many short walks, v. fewer amounts of long walks. New York City, for example, is a fabulously walkable place, but it probably has many pedestrian fatalities, more cold weather, and higher crime than the sun belt cities that dominated this list.

All in all, there was no spatial component of any kind in this study. In other words, where people walked made no difference at all.

Little weight was given to places that might have average-to-good overall walkable streets, but no places of really high pedestrian traffic. Minneapolis and Saint Paul are clearly cities that are in that category. We don't really have the kind of streetlife that you might find in Boston or San Francisco. Except for a very few locations, you're never going to get those amounts of density on Twin City sidewalks.

Rather, the sidewalks here are really pleasant, and underused. That actually makes for fairly decent walking, in a great many places. Certainly Minneapolis is better then their #4 ranked city, Charlotte, North Carolina (I've walked there and its nothing special.), or their #15 ranked city, Las Vegas, Nevada (pretty mediocre walking, apart from the strip).

Sidenote: (But, OH MY GOD, their website is so terrible! It's intolerable! Their rankings aren't searchable, or split up by number or name. You have to page through 10+ pages of small tables to find out anything!)

(Frankly, Prevention Magazine seems very dependent on athletic shoe advertisers for revenue, and for that reason alone their study gives added weight to, for example, the # of athletic shoe purchases in a given city.) 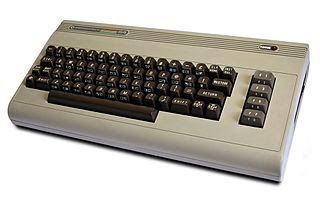 [Little known fact: The Prevention Magazine Walkability Rankings were created on a Commodore 64.]
That said, and even though Prevention Magazine's ratings totally suck, the idea of boosting walkability, and walking as a form of exercise, is a very good one.

Sidewalks are highly correlated with public health. And neighborhood design is a crucial component of things like the obesity crisis, social capital, and creating a participation culture in the U.S. We need people walking, biking, running, walking their dog, and experiencing the world first hand!

Lately, I've been coming across study after study that has emphasized the connections between sidewalks, walking, and health.

For example, here's a study on how urban design can encourage walking and urban health, from the Journal of Planning Education and Research. The abstract:

The authors examine the magnitude of health benefits from urban design characteristics that are associated with increased walking. Using geocoded travel diary data from Portland, Oregon, regression analyses give information on the magnitude and statistical significance of the link between urban design variables and two-day walking distances. From the coefficient point estimates, the authors link to the health literature to give information on how many persons would realize health benefits, in the form of reductions in mortality risk, from walking increases associated with urban design changes. Using a cost-benefit analysis framework, they give monetized estimates of the health benefits of various urban design changes. The article closes with suggestions about how the techniques developed can be applied to other cost-benefit analyses of the health benefits of planning projects that are intended to increase walking.

And here's a great book I picked up recently called Health and Community Design that connects the dots between suburbia, auto-dependence, and some of the public health problems we've created in America during the past 50 years. It should be fairly obvious that there's a feedback loop between giant houses, three car garages, a lack of sidewalks and local stores, and people with fat asses.

Most the of the communities where Americans live are important contributors to current public health problems. Simultaneously, they can also be the source of important solutions to these problems. Communities can be designed to make physical activity in them possible and even desirable. Environments that encourage moderate physical activity may also have features that make them more liveable in other ways, by improving one's quality of life -- they may generate more social interaction, foster less dependence on the automobile, be safer for their inhabitants, and give people more choices with respect to how they get around and spend their time. In these pages we do not seek to condemn any particular form of community design. Rather, a central goal is to develop a better understanding of the ways in which the features o the built environment serve to encourage or discourage health -- promoting behaviors, two of which are walking and bicycling.

But we never really think about how our landscapes condition our behavior. Instead we just blame ourselves, drive to the Barnes & Noble, and buy diet books with reckless abandon.

Plus, isn't it nice to think that we can save the planet and lose weight, all at the same time? Isn't that the bourgeois dream come true?

Here's another walkability study (from Brookings) that is much better done. The Twin Cities ranks #17.

One of my all-time favorite must-read articles from the Rake Magazine's Jennifer Vogel a few years ago on a year of walking in Minneapolis:

On the first day of my walking regimen, I slipped into hiking boots and filled a backpack with various work papers and skin lubricants. It was March, so nobody was outside. Nobody who wasn’t in a car, that is. A recent survey asked Minneapolis residents to list their primary mode of transportation; seventy-four percent travel by car, sixteen percent by bus. Only two percent listed each bicycling and walking. That’s not so surprising when you consider other city statistics, which show that the total number of “vehicle miles traveled” increased 129 percent between 1970 and 1990, and that since the 1950s, more than five hundred miles of highway have been constructed in the metropolitan area.

I tend to think about walkability a lot when I visit other cities. Yes, good walking cities promote good health (for people and the earth), but I really like how they make you feel so much more connected to the community itself. Cars take away a lot of this interaction. I'm always a little sad to come back from a good walking city where I don't need a car to a place where I depend on mine so much.

I didn't own a car until I was 32, so walkability (and public transportation and biking) are the first thing I look at in a place, even though I now use a car. When I was on the job market, after living most of my life in the Bay Area, my choices were Los Angeles (no car!), St Louis (terrible if you didn't have a car), Chicago (exciting but a little overwhelming) and here. This turned out to be the best choice for the job, but my first two years here without a car I got an up close look at those sidewalks.
The Twin Cities has pockets of great walking separated by desolate zones of sad or nasty cityscapes (and I don't mean the poor neighborhoods), mostly due to the fact that for decades the city turned its back on the pedestrian and plopped down a grid of canyons and freeways.
Oh, but I see you have a whole site about this! I look forward to exploring your archives. Glad to have found your place.