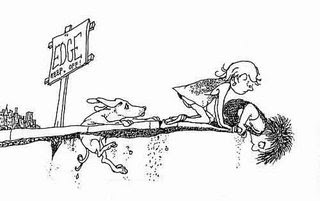 It's time once again for another POS (Principles of Sidewalkery)! Having already covered increasing returns, and walkability . . .

Today we're going to look at density, what it means, and what density can do for you.

Density has long been the urban unmentionable, the one thing everyone shuns, fears, runs from . . . For example, we had a city civil engineer in our planning class today talking about the interesting (and not so interesting) parts of his job doing infrastructural planning for cities out on the Western edge of the metro, and he never got more animated then when he was describing city council meetings about increasing density. Apparently, out on the rural fringe, increasing density is the moral equivalent of throwing a puppy off a cliff. It's not something you want to do if you're a city planner or a marine.

And it's not just exurbanites who detest density. This is America! This is the least-dense country on the planet.* It's almost a universal proposition, like death and taxes, that nobody wants more density in their neighborhood. It's been true for every demographic in America ever since the first ship came over filled with people trying to get away from it all.

And ever since cities started growing exponentially during the industrial revolution, moralizing do-gooders have been trying to figure out ways to decrease density, de-concentrate, and decentralize the big bad city. A good example is this quote from Lewis Mumford, probably the most famous 'urbanist' in American history, who wrote early in his career in a letter to Patrick Geddes that his work was for "the purpose of establishing the conditions upon which decentralization may effectively take place" (from this book, p. 93). Given the squallor and cramped conditions of turn of the century US cities, it's hardly surprising to want to alleviate poverty, slums, or public health concerns. But density is viewed as a problem no matter where you live -- from North Dakota to the Lower East Side, nobody likes it when a family of fourteen moves in next door.

Little is said, though, to defend density. Sure, the engineer that talked to our class liked density because it represented the "most efficient use of infrastructure", but that can hardly serve as density's rallying cry. Rather, I'd like to tell two recent anecdotes about the greatness of density in my life . . . 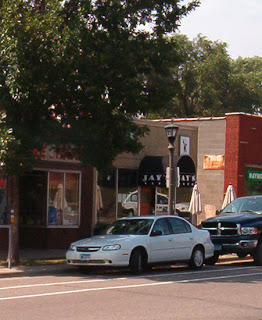 The first is from Jay's Cafe, the tiny little (delicious) restaurant on Raymond Avenue in Saint Paul. I went there with a bunch of my family one weekend morning a few weeks ago, even though I'd warned my aunt that it would be hard to get a table, and we arrived (seven of us, including a cane-wielding octogenarian) to a crowded, pleasant little room.

Unfortunately, there was only one free table with four chairs and nowhere to wait, and my heart was heavy until my cousin asked if we could share a table with a woman sitting alone. It turned out she said "yes," and we joined her. I've since forgotten her name, but she, my two cousins, and I had a wonderful conversation with her about Taoism, world travel, living in the US South, poetry, and the nature of random events as we all ate omelets. She was into what I'd call new age philosophy, and believed a great deal in chance, being "present", and openness to new experiences. And there's no doubt that density brought us together for breakfast that morning.

The same thing happened to me last weekend at the Kitty Cat Klub, where I'd gone to meet some friends for a drink. There was a pretty damn good band playing (Black Blondie), and the place kept getting more and more crowded. Eventually, three people ended up sharing the quartet of couches with my friends and I, and we chatted with the strangers for at least an hour about moving to the Twin Cities, the excellent local music scene, life in Bemidji (v. Bangor, Maine), and the challenges of our different workplaces. Again, a completely random encounter, making friends with new people, made possible through density. (As Crispin Glover once said, "you are my density.")

I've had very similar experiences at places like Al's Breakfast, the dining car on the Empire Builder, at parties, on dance floors, and even on the filthy, filthy bus. Of course, I wouldn't want all of my life to be like that, but in today's individualized age we often forget how, through most of human history, people lived together in dense groups. And these kinds of minglings can be very productive. It's how people meet each other. It's how we get new ideas. These comings together, the encounters between disparate, different, diverse people and words and ideas and images . . . it's only when they meet and concentrate and affect each other that new organizations, organisms, movements, and change emerge and make real differences in the world.

And density was one of the main reasons why Jane Jacobs was so roundly castigated by her 1960s contemporaries, most especially Mumford. Jacobs believed that density was a crucial function of cities, one of its "generators of diversity," and that dense urban neighborhoods were often the most "alive" parts of cities. Unlike others who argued that overcrowding was the cause of poverty and crime, Jacobs believed that:

people gathered in concentrations of city size and density can be considered a positive good, in the faith that they are desirable because they are the source of immense vitality, and because they do represent, in small geographic compass, a great and exuberant richness of differences and possibilities, many of these differences unique and unpredictable and all the more valuable because they are"

This kind of message was the exact opposite of that preached by architects, planners, government folks, and sociologists of the time. Even though today's cities have far less distinct neighborhoods than they did in 1958, I think its worth thinking about the ways that density creates diversity and new experiences, not just at restaurant tables, but on city streets, in neighborhood stores, in vacant buildings, in the recesses of your dusty head, and in political and everyday life.

Out with the crowd . . . In with the dense agglomeration! Embrace less space! Cram into the elevator! Fill the aisles! Share a table! There's standing room only. 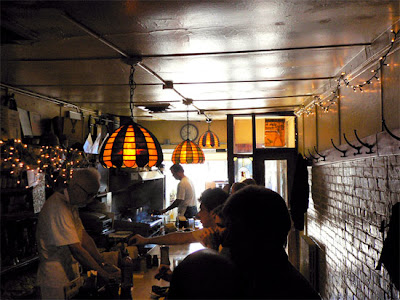 [Al's Breakfast, probably the highest density spot in the entire Upper Midwest. And also one of the most fun. h/t referencelibrary]

*Not actually true. I think it'd be like Mali, or something.

UPDATE: Actually it is true, according to this totally inadequate chart. At least, we have the least dense cities in the world.
Posted by Bill Lindeke at 11:29 PM

Great Essay on the benefits of Density, I am curious as to which city the City Civil Engineer was from?
Did he give any tips on how to find work in the field of Urban/Regional planning once you're done? I am personally concerned that I will have to go back and get a civil engineering degree to be taken seriously in the working world...when all I want to do is work work with High Speed Rail :-(
Once again, great post and photos.