On Getting an iPod 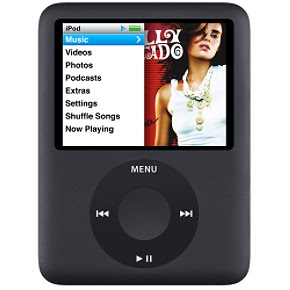 I'd been thinking about getting an iPod for years. I sat on the fence dipping my toes, going back and forth like a ping-pong ball at a pendulum convention. Should I do it? Should I land on Planet Earbud? Should I don my head bubble? Shall I divorce myself from the wide world?

My doubts proved bubbling enough to keep me from taking the leap . . . that is, until my brother (a lawyer who makes far more money than I) decided to give me a new iPod Nano for Christmas. And, since then, my life has changed dramatically.

I'd long thought that iPods were akin to sidewalk treason, part of the vast technological conspiracy to privatize what little public space is left in this fine country. People put these things in their ears, little personal soundworlds that keep them from experiencing, enjoying, and engaging with all the sounds, streetlife, and commotion that surrounds them. In that way, they're very much like cell phones, which have also served to fracture public engagement. It's a slippery slope from craming your nose in a book on the bus, to listening to an iPod on Nicollet Mall, to talking on the phone in line at the supermarket, to watching a portable DVD player in the park, to shoving your head straight up where the sun don't shine.

So, I'd found myself in a pickle. I started to do some research, glancing through a book chapter on privatized media in the city by British Prof Michael Bull. In his piece, he quotes interviews of people describing driving their cars, particularly the experience of control, privacy, and media within the cockpit. I found it really interesting:

I can't even start my car without music being on. It's automatic. Straight away, amplifiers turned on. Boom boom!
(Kerry)

This really rings true for me when I drive, and is one of the big reasons why people are so willing to commute long distances in this country. There's an almost religious experience happening inside each commuter's car. Other than the toilet, this is the only part of the day spent really alone. And, unlike the toilet, one is in complete control.

You're nested within a kick-ass surround sound system with total climate control, and you sing along to music, have "driveway moments" with MPR, or whatever. The point is that, when driving, we're each in completely individualized environments, and there's zero social interaction that isn't mediated either through the radio (call in shows, etc.), cellular telephone (illegal in many states), or windshield ("honk if you love ...").

Well, be they cars or (head)phones, these personal bubblemachines have bothered me for some time. Pervasive technological individualism is the very soul of both iPod and Cadillac. But, like millions of Americans before me, I've become mesmerized by the sonic and tactile beauty of these little, magical machines.

Years ago I used to listen to music all the time. I have fond memories of listening to very first cassette tape on a blocky 80s Sony Walkman while perched in my backyard treehouse. Naturally, that first tape was the eponymous New Kids on the Block album, and I loved it . . . not only the sweet sounds of Joey singing "pop-pop-pop-si-cle", but for the revolutionary pirate privacy of having my very own sound experience, far from the control of parents. It was the bright sound of my future. (In retrospect, perhaps not such a bright sound?)

I moved on from NKOTB. I still remember those first tapes: The Police, George Michael, Paula Abdul, Milli Vanilli, Madonna, Snow. I even got better taste as I aged, and moved up from Walkman to Discman. I collected countless CDs by Gene Harris, Oscar Peterson, Miles Davis, John Coltrane, Ornette Coleman, and most especially Glenn Gould's Bach, and listened to them while walking the streets of college campus, or riding the L train through Manhattan. But then my Discman broke, and I forgot about music for a while. Today, thanks to the iPod, I'm back in la la land, and it's quite the treat.

And then I discovered the podcasts. Since Christmas, I've been rabidly downloading everything I can get my hands on . . . lectures from fabulous UC Berkeley professors (via iTunes U), WBUR's On Point, WNYC's Radiolab, Jon Nelson's locally-produced Some Assembly Required, KFAI's Truth to Tell, and (my personal favorite) Christopher Lydon's interviews on Radio Open Source. These days I cannot wait to walk out the door, plug into my tiny little earbox, and experience the world while walking the streets. Even for me, who goes far out of the way to walk far out of the way, I'm finding myself waiting for the bus simply to listen to my iPod.

And I'm sure I'm not alone. iPods are everywhere, especially at the U of M campus. They grant people the kind of control over their environment they can only get in a car, or on a remote-controlled couch, and (along with cell phones) it probably does more than anything else to marry the contemporary technological mediation with the excitement of sidewalks. It strikes me that anything that catalyzes people's experience of public space, even in a highly mediated form, is a good thing.

That said, there's still a danger to this kind of mediation . . . what Richard Sennett calls "aural solipsistic ghettos", Anna McCarthy calls "ambient" media, or what Michael Bull argues creates a vicious cycle between strictly personal experience and empty "non-spaces" in our cities. After all, if everyone has headphones, why bother making cities devoid of freeway noise? And I'm sure I've missed so many opportunities to overhear. No matter how hard I try to turn my iPod off at the slightest scent of a good eavesdrop, I'm a far poorer observer with an iPod in my head.

I guess I'll have to live with it. We'll never get back the pre-technological city (if there ever was such a thing), and maybe that's OK. One of my favorite blogs recently posted a terrific, and lengthy essay about the possibilities offered by a highly-mediated city. In it, its author describes all the latent waves of communication that percolate, veiled beneath today's urban landscape. The city becomes a computer:

The way the street feels may soon be defined by what cannot be seen with the naked eye.

Imagine film of a normal street right now, a relatively busy crossroads at 9AM taken from a vantage point high above the street, looking down at an angle as if from a CCTV camera. We can see several buildings, a dozen cars, and quite a few people, pavements dotted with street furniture.

Freeze the frame, and scrub the film backwards and forwards a little, observing the physical activity on the street. But what can’t we see?

We can’t see how the street is immersed in a twitching, pulsing cloud of data. This is over and above the well-established electromagnetic radiation, crackles of static, radio waves conveying radio and television broadcasts in digital and analogue forms, police voice traffic. This is a new kind of data, collective and individual, aggregated and discrete, open and closed, constantly logging impossibly detailed patterns of behaviour. The behaviour of the street.

Check out the whole thing. It's like a science fiction story, only most everything he describes is doable today. In the meantime, I'll see (but not hear) you on the sidewalk. 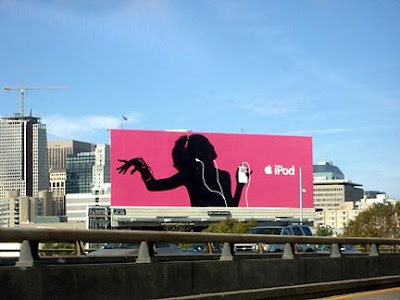 [The iPod lady beckons by the freeway, urging people out of their cars, so they can dance while singing along to Black Eyed Peas instead of sitting, strapped into a seat, motionlessly clutching a wheel h/t macrumors.com]
Posted by Bill Lindeke at 11:45 PM