Sidewalk of the Week: Central Avenue 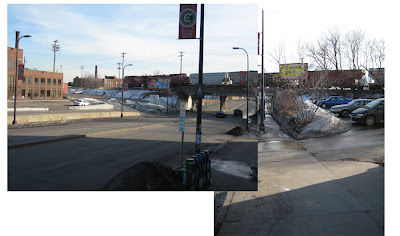 [One of the three tracks for trains that runs over and under the Central Avenue sidewalk. ] 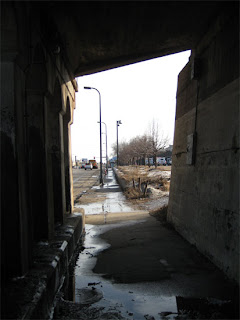 It's hard to feel exactly comfortable on this sidewalk, on Central Avenue between Tyler and 18th Avenues in Northeast Minneapolis.

For one thing, the streets here are designed for trains. Trains run everywhere near Central Avenue, over passes, in alleys, through corridors lined with trees and fences. You walk underneath train cars through archways along paved lots and down wide spaces. The bricks are cool to the touch, and everything is larger than you are.

Just down the street, though, there's a touch o' the humanity. The Ideal Diner sits a block or two away, and going there you can see what this neighborhood might have been like when it was chock a block full of workers. There's just no other way to explain why a diner might be sitting surrounded by industrial factories. (Sorry, no picture of said diner... but its well worth the visit.) 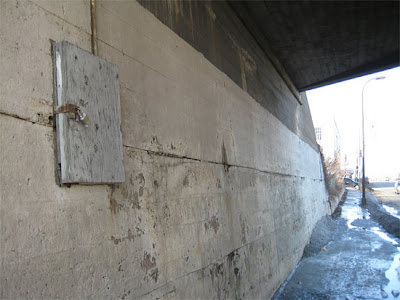 [The concrete wall of the train bridge houses a mysterious door. What lurks inside?] 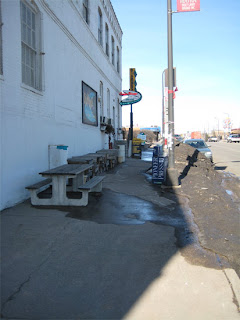 On this sunny spring day, I found myself walking down this larger than life sidewalk and happened across the Thorpe Building, a large warehouse now re-used as a mix of art studios and Diamonds Coffee Shoppe.

They'd arranged the sidewalk nicely, with picnic tables, signs, flowerpots, and a well placed newspaper box. Still, though, the area has a remarkable magnitude, and unless you're there in the early morning you cannot but sit shadowed by the Thorpe, which quite sufficiently casts a sidewalk shadow.

All around you the space is dominated by the trains which still pass with some frequency, filling the air with the clunk clunk sounds of wheels on steel. It's soothing to sit in the many labyrinthine rooms of Diamonds while the deep hum of wheels trickles through the tall and narrow hallways, sounds of train mixing with the damp, husky smell of springtime mud.

[A sign for "eco-friendly garden supplies" sits precipitously perched on a concrete lip, surrounded by a slight drift of ice, as the sidewalk runs past the pavement concrete in the shadow of the Thorpe. A silent hydrant stands guard.]

Part of that strange feeling you get in Northeast Minneapolis is due to its multiple axes. Things here weren't designed strictly for cars. Train tracks, wide streets, parking and alleys for trucks run through the sidewalks like scribbles. It's hard to think of what it might have been like before the automobile took control. Were there more sidewalks? Did people organize themselves perpendicularly, along the sides of tracks? Were there extra tracks here, running in and out of buildings? How many alleys have been forgotten?

[This is not a street. It's a railroadalley, where people used to load or unload or gather in groups, huddling round empty boxcars. Were barrels on fire? Bales of hay?]

The Central Avenue sidewalk runs through an unruly mix of uses . . . deconcentrated industry plus art lofts plus low rent entrepreneurial enterprises plus the occasional shadow of a high rise tower off in the distance. Northeast Minneapolis is exactly this kind of sprawling diversity, seeming in most parts to hover just short of a critical mass. Even following the sidewalk North on Central Avenue, through the old streetcar density, you feel like things are just a little bit too large for comfort, a touch too much of the uncanny.

But that's what makes these sidewalks so endlessly fascinating. There are moments when you feel lonely and cold, and other moments of stark beauty, when the sun shines between smokestacks, the train clacks past in the distance, and finally disppears. 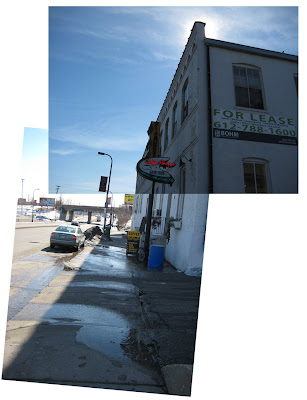 [The Thorpe Building blots out the sun.]
Posted by Bill Lindeke at 11:26 PM