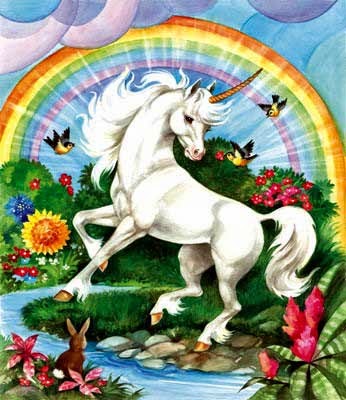 Welcome to a personal list of blog highlights from the following year, a bit shorter than in years past because I took some time off from blogging to finish my dissertation, which I did.

That said, I'm proud of much of the work that's come out of this site over the past year. One of the guilty pleasures of blogging is the feeling you get when you re-read past posts. Sometimes I am completely surprised by them.

Then I'll realize that reading my own writing as if for the first time is the ultimate form of masturbatory narcissism.

Anyway, some good stuff in here. These are my dozen favorite ones... 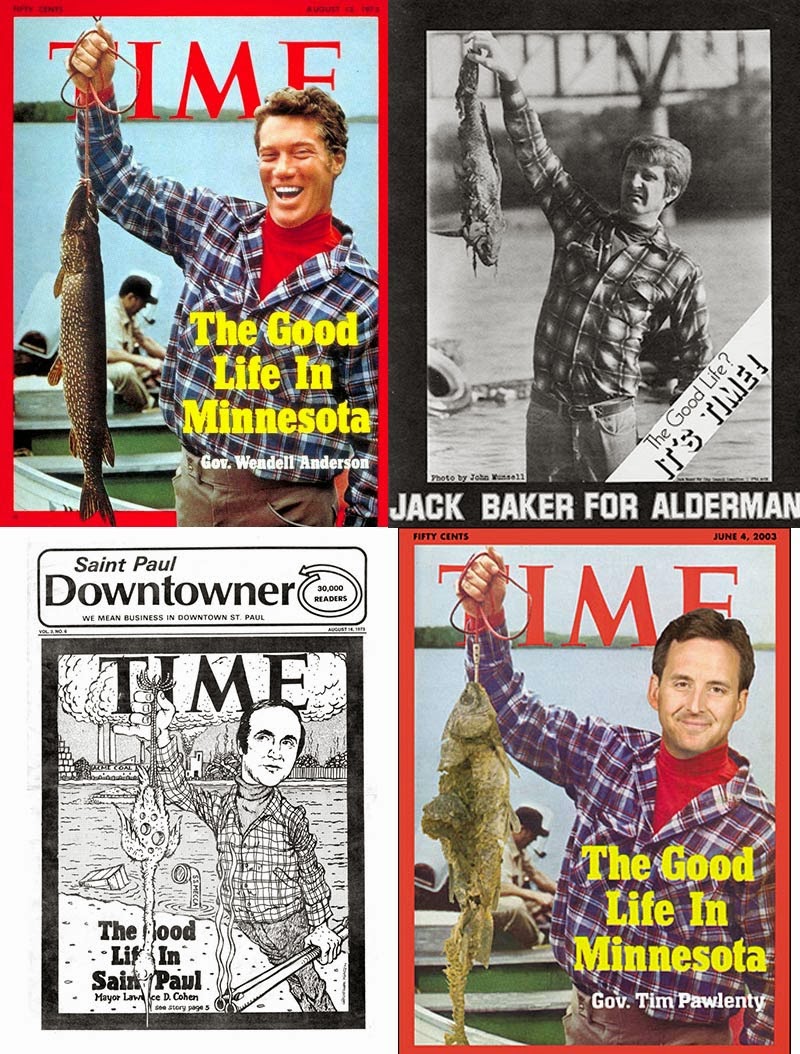 This one didn't get any traffic, but I liked it. Once in a while, I dwell on symbolism. This is kind of like the amazing McSweeney's Convergences series (which is one of my favorite things by one of my favorite writers), only with Mike Gravel and Jeffrey Wagner, so it's awesome.

#11. 3 Reasons why I Re-Blog the Highland Villager

An attempt to explain myself viz. the whole Highland Villager thing. I tread carefully around actually critiquing the Villager for two reasons. First, Saint Paul is a small town and everyone knows each other. Second, I do like the fact that the Villager is there covering meetings; I just wish they'd go online, and try harder to reflect a greater diversity of perspectives.

Anyway, this is the best I can do for media analysis. It feels weird to pick on the little guy, instead of the Star Tribune or something [see #3].

#10. The Silent Sanity of Freeway Pockets

Sound in the city is something that I've been thinking about for a long time. I believe that cars are so omnipresent in our lives that they become almost invisible, their engines fading into silence. But that doesn't mean they're not always there, eroding our sense of safety and pushing silence away into the wilderness. If I had better map skills and more nuanced data, I'd love to be able to make a proper sound map of Minneapolis and Saint Paul, and to try and figure out where the actual sound pockets might be.

Until then, when it comes to freeway-free pockets, much like obscenity, I know it when I see it. These spots just feel different somehow.

#9. Freeways are Public Space Too

Speaking of freeways, one of most interesting political events of the last year was the Ferguson-inspired protests taking to the freeways (and malls) all over the country. I did a little impromptu analysis of why I think this is important, and how intriguing it is to link police violence, race, and our built environment.

When you blog for this long, you come up with a lot of ideas that get delayed time and again. The "half-ass" award is one of these; I think I asked Andy Signer to draw me a logo illustration years ago, which he did promptly.

Well, I finally followed through with the first ever awarding of the half-ass prize for bike infrastructure. Look for more of these in the future, as there are no shortage of suitable candidates.

#7. The Case for the Saint Paul Flag 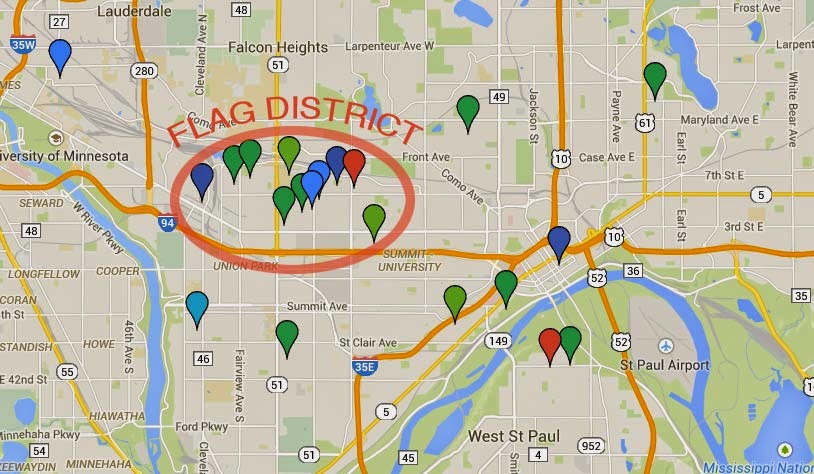 One of the coolest things to come out of 2014 is the renaissance of the Saint Paul flag. After buying one fo my own from my friend Andrew, who himself was inspired by my friend Andy, I wrote up a post about the history and magnificence of our fine flag.

Since then, I've ordered and sold two dozen flags. In a little while I'll be trying to round up some new orders and have another batch made. Let me know if you want one! Maybe someday these will be commonplace in Shelbyville.

#6. Return of the Repressed Uptown Loft

Another thing I've been mulling about for years is the intersection of new condos and sexual repression. Walking around Uptown these days is kind of a trip; for example, the Lyndale VFW is surrounded on all sides by the most odiously branded building!

#5. No Bike Parking along the Green Line is Absurd 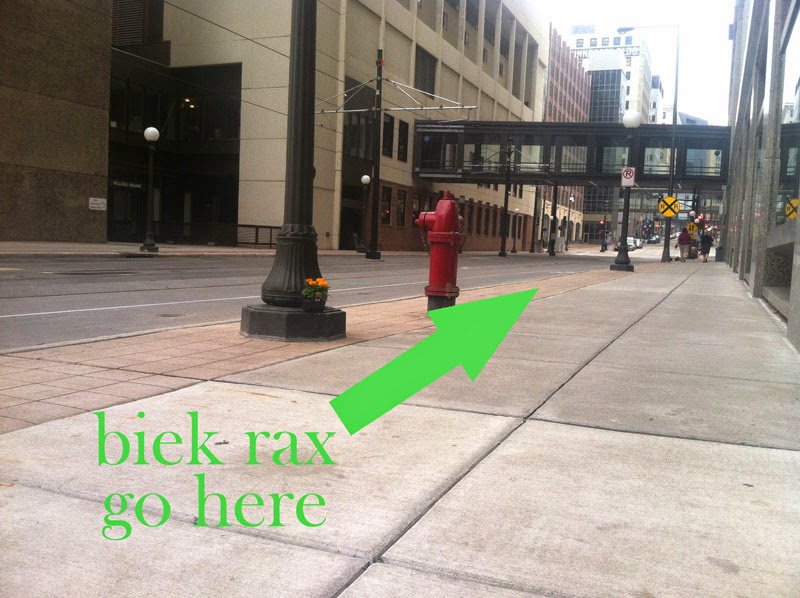 This is one of my favorites; short, sweet, and well illustrated. The Green Line is the best new thing of 2014 for sure, but I sure with they'd installed a few bike racks when they were completely remaking the street for a billion+ dollars. How hard would that have been? Installing bike parking should be automatic, just like striping bike lanes should be automatic.

#4. Three Things You Should Know about the Suburban Equity Cry

This is the one that's the most important. The suburbs trying to get more than their fair share of transit money really pisses me off. I did my best to make the case against the 5-county manifesto. I think this is a great example of a crucial issue that is often too complicated for most people to understand, what you might call bureaucratic mystification. One of the most important things that journalists and bloggers can do is translate these complicated structural problems into plain English. That's what I tried to do here.

Though I took a bunch of time off from the blog this year, sometimes you just get forced into action by a truly crappy news article. This is one of those times; thanks Star Trbune. You gave me a reason to get out of bed that morning, and I had fun poking holes in their piece about the tired "renegade biker" trope. It's time to put this one to bed.

#2. Ranking Green Line Stops from Least to Most Exciting

This is pure science. I know that because I'm a doctor now.

Also, this was the most fun to write. I like ranking things, and I like Saint Paul, so ranking Saint Paul things is pretty much my idea of a good time. Also only 2.6% of the posts on this blog involve making up fake statistics, so that's fun too. 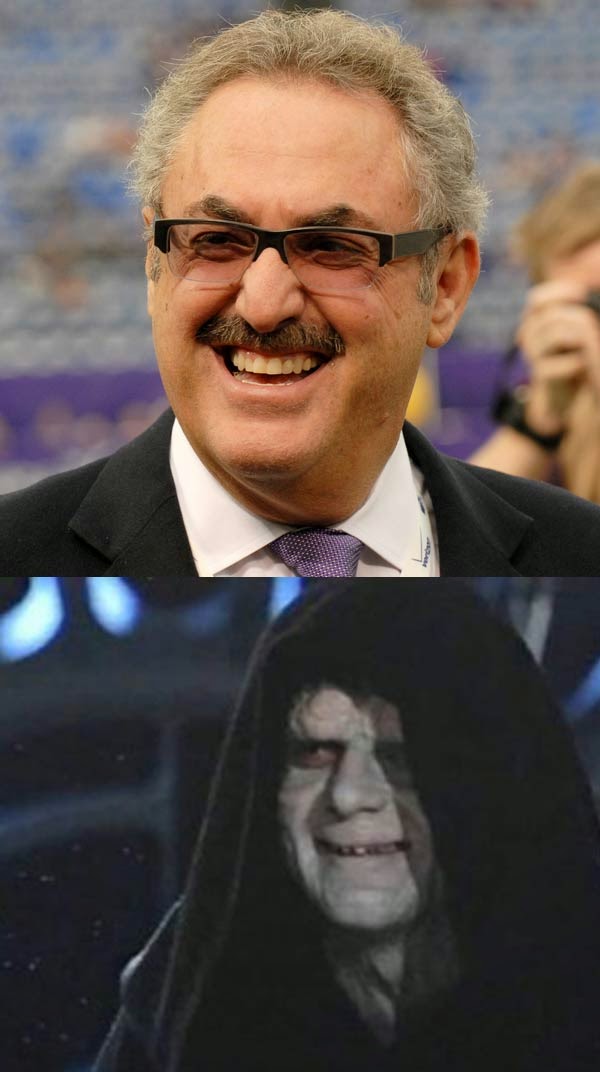 This was the best thing on the blog last year. Plus Rybak as Lando? It's just so perfect. Making this was great fun. I don't know why this post didn't go mega-viral and sweep the nation and do to the Vikings' institutional self esteem what Admiral Tarkin did to Alderaan.

I guess all the years of losing took care of that already?