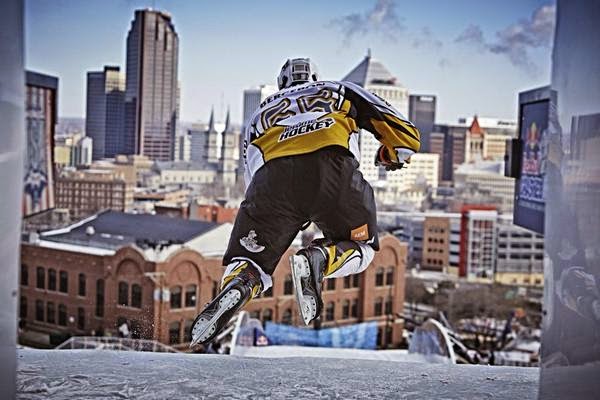 Last Saturday was a great day in Saint Paul. I’ve written before about why I like events like Crashed Ice despite the crass commercialism inherent in transforming your city’s hallmark religious building into a giant logo for a horrible energy drink. And on Saturday, as the Winter Carnival Parade, the Crashed Ice race, a double-feature of Prairie Home Companion, and hockey things were going on simultaneously, Saint Paul felt as alive as I’ve ever seen it, full of people, activity, diversity, and surprise. It was great to walk around!

But as is often the case, the experience led me to dwell on the fundamental difference between walkable cities and a car-based society. Try as we might to reconcile the various “modes” of urban movement, the difference between driving a car and doing just about anything else all comes down to density. Put simply, in a car, more is bad; outside of a car, more is good.

It’s relatively simple to understand. Just look at any car commercial, showing people driving their shining new SUV through a city street. The one common denominator is that in almost every case, the streets are practically empty. The ideal state for driving a car is to be completely alone, to have the city all to yourself.

You just can’t get around that fundamental opposition. Cars transform us all into misanthropes.

And it’s really a shame. Last Saturday, I found myself riding the Green Line train with a serendipitous friend. Because of all the activity, the train was full of people, and I found myself chatting with a man sitting on the next seat. He visiting Saint Paul from Tennessee just to see Garrison Keillor perform before he retired. Before you know it, I was giving him directions to the Fitzgerald Theater, and then helping another couple find the Great Waters Brewery. There were families, strollers, people from all over the country all taking the train through Saint Paul.

Getting off and riding my bike down West 7th Street, I happened across the Winter Carnival Parade, then headed for the Original Coney Island for the first hot dog they’ve served in 30 years (one of Saint Paul’s many shuttered businesses). Later, the thrift store, a walk through the Crashed Ice, a quick tour of the Cathedral's interior, and a walk down the street to a friend’s party on Cathedral Hill.

Everywhere I went, there were people on the street. The city was so much more alive than it usually is. And because I wasn’t driving, I could enjoy it.

Totally agree, I was out and about that entire day and even at 10pm there were people walking all over the eastern ends of Summit, Selby and downtown was jammed with people. I don't think I'll ever forget it because it had such a different feel than a post-grand old day evening. Everything seemed normal like, oh there's a group of people that decided it would be okay to walk 3 blocks to Muddy Pig -no problem. For one day everything just kinda came together and St. Paul felt like a functioning city.

This is a very salient observation.