Hey, it's time once again for a psychogeographic bike ride. This time we're going to "strike" five different bowling alleys in Minneapolis and Saint Paul, ranging from East to West across the Twin Cities.


NOTE: We will NOT be bowling.

Well, for one thing, bowling is old. As soon as people invented "round things", they started rolling them and knocking things over. Egyptians did this. Romans did this. We can only assume that everyone has always been doing this.

Proper pin-type lane bowling is only about 120 years old, coincidentally invented just as the bicycle was becoming a popular everyday technology.

Both involve rolling. Both involve moving down the center of a lane without ending up in the gutter. Coincidence? I ask again.

We will do this together. Bicycling to bowling alleys to determine the state of the lanes in 2014.

NOTE: We will NOT be bowling. 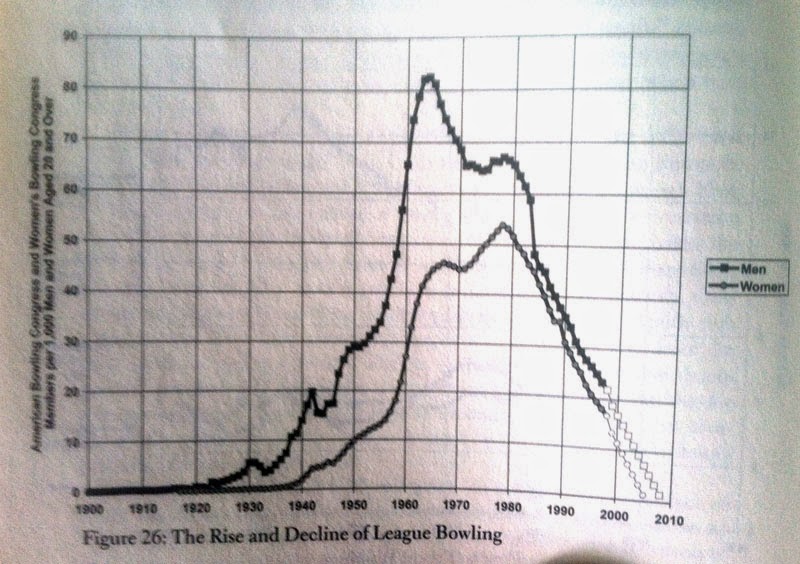 At some point in the past twenty years, nostalgia for bowling has rolled its way into our hearts. You might blame the Coen Brothers for bringing us The Big Lebowski, where bowling serves as a metaphor for the fraying 90s social fabric.

Or you might blame sociologists. Thanks in part to Robert Putnam's (2000) book Bowling Alone, bowling has become a synecdoche for social health more generally. "As goes the bowling alley, so goes society."

And, at least according to Putnam's problematic metrics, Minnesota (and the Dakotas) score the highest when it comes to "social capitol", meaning a certain form of togetherness marked by things like Shriners, golf outings, card playing, voting, picnics, etc. In other words, Minnesota is the last bastion of bowling! Let's explore it together.

Five bowling alleys, from the old to the new and everything in between. What will we see? Who will be bowling? Is Minnesota truly "bowling alone"? Do people have their own balls anymore?


When: starts at 6:30 on Thursday, June 19th, 2014.
Total distance: less than twenty (20) miles.
Cost: free, donations highly appreciated.
Ending: leave at any time, but the final alley is in Northeast Minneapolis.

NOTE: We will NOT be bowling.

PS: If you live in Minneapolis and are feeling lazy, you can put your bike on the GREEN LINE to get to Snelling and University!