No Bike Parking along the Green Line is Absurd 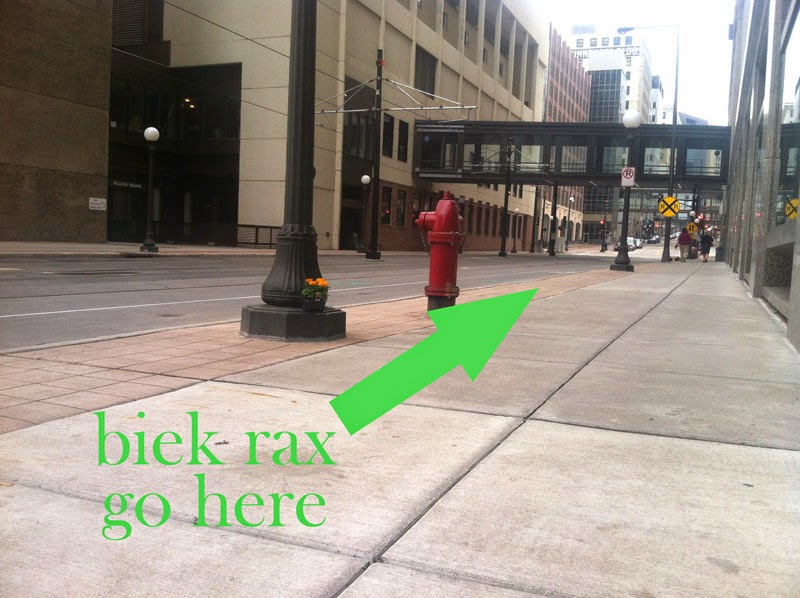 One of the reasons that Baruch Spinoza (1632-1677) is my favorite philosopher is that he has an amusing habit of calling certain things "absurd." For example, the impossibility of having more than one essence (or "nature") was self-evident, obvious to anyone with the semblance of a rational mind.

I rode the Green Line this weekend, and I'm very pleased with it. That said, there are lot of little details that leave much to be desired. For example, how walkable are the sidewalks alongside the light rail? What are the crosswalks and station connections like? How are the bus connections? Will the land use regulations foster walkability? Will there be bike lanes connecting to the stations?

These are all things that have little to do with the light rail train per se, things far outside the purview of train conductors or traffic signal engineers. But in another way, these little details are the key to the whole enterprise.


Yet for some reason somehow during the three decades of planning and three full years of construction (including complete reconstruction of almost all of the sidewalks alongside the path of the light rail train), one is hard pressed to find a bike rack anywhere near the new Green Line.

Let's look at a few spots where this lack of the obvious is the most absurd. If "penny-wise, pound-foolish" is a thing, what might you call this?

One major change catalyzed by the Green Line was to re-design Washington Avenue through the University of Minnesota campus into a bicycle and transit mall. There is now a large bicycle-only lane (complete with expensive bicycle-only turn signals) running through the East Bank, which is the #1 place in the entire state of Minnesota where people ride bicycles a lot.

Good luck finding a single bike rack along Washington Avenue, which is lined with businesses where people riding bicycles will stop and do things. Instead, bike riding people will lock their bikes to anything they can find... 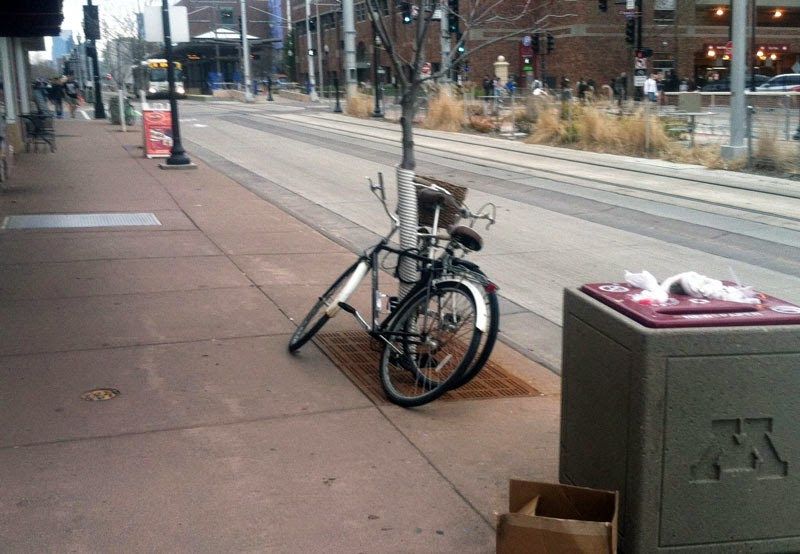 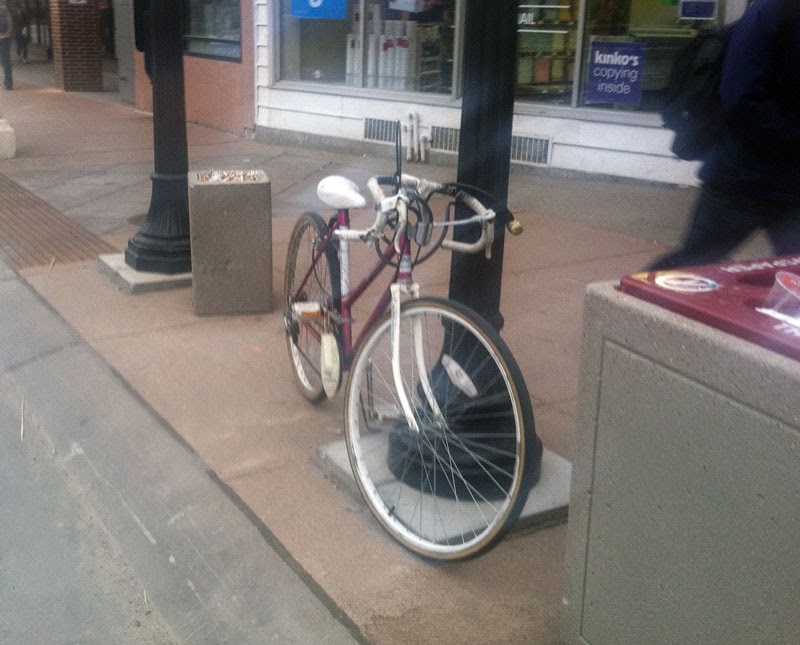 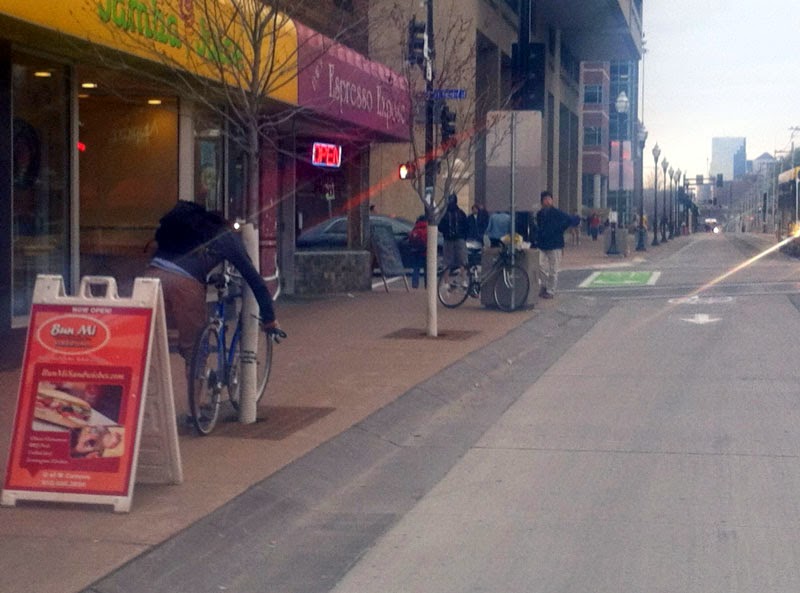 Person #1: Hey let's design a street for bicycles, only have nowhere for them to park.

Person #2: OK. Let's spend a billion dollars on it too.

Person #3: I can't think of any problems. 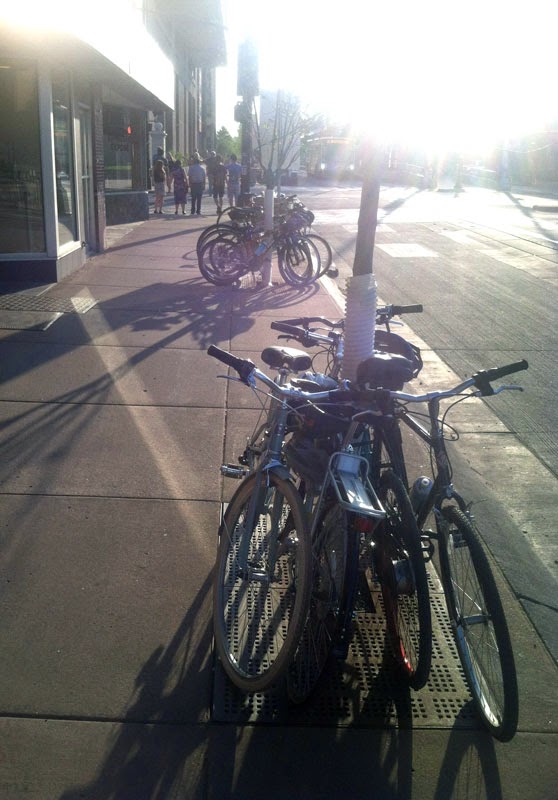 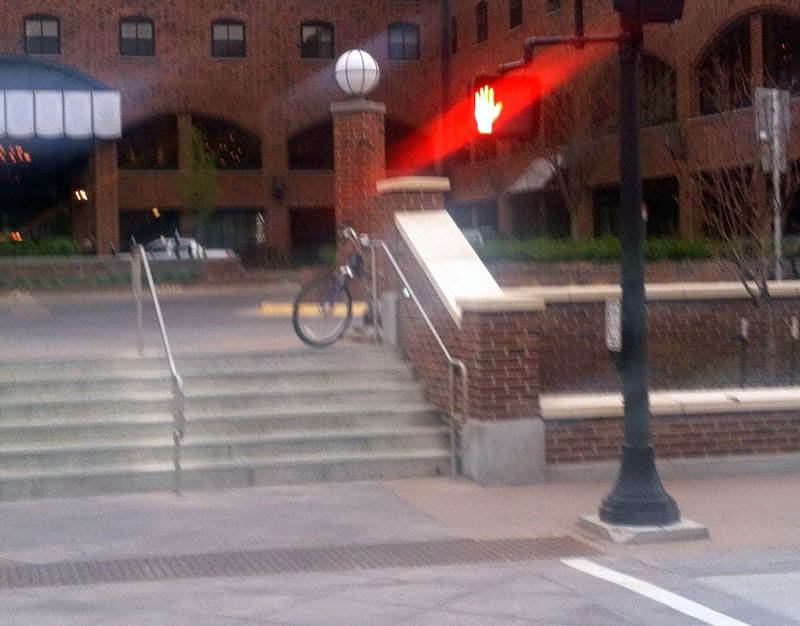 This is a $250,000,000 multi-modal facility next to the $1,000,000,000 train. After a great deal of pleading from the downtown Saint Paul bicycle community, the managers of the Union Depot installed convenient bike parking right by the massive station entrance, which is where 99% of bicyclists riding to the Union Depot will look for it.

Spot #4: Anywhere else along University Avenue

Oh yeah, there really isn't any bike parking along the ten miles of University Avenue either. 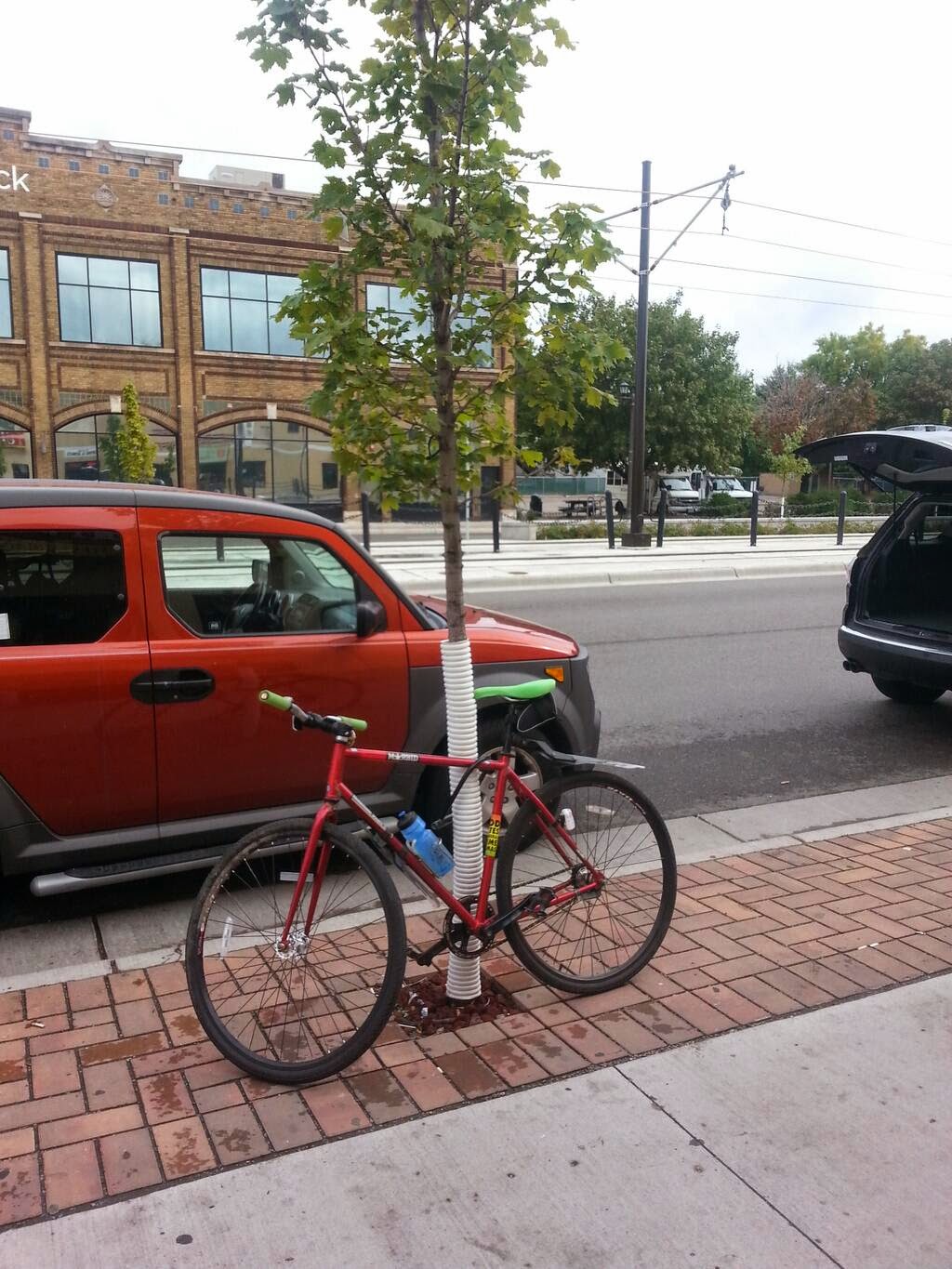 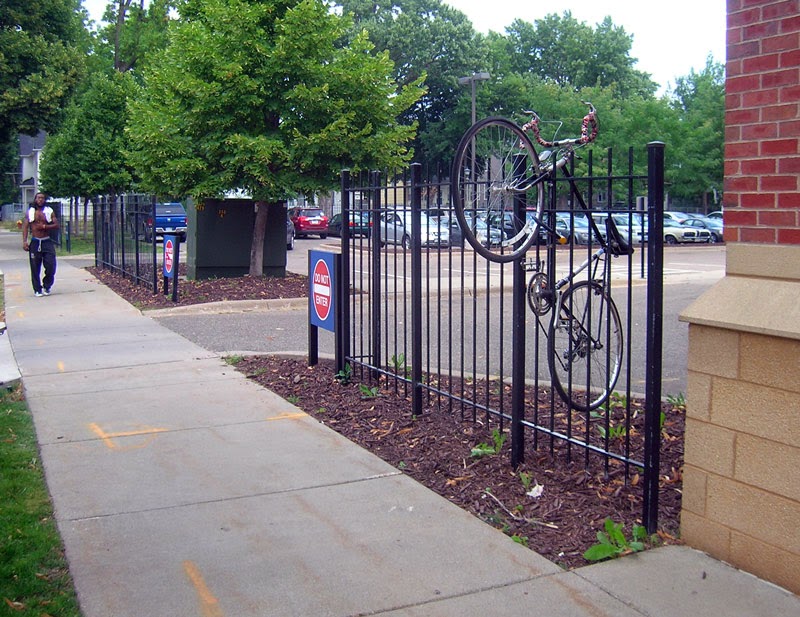 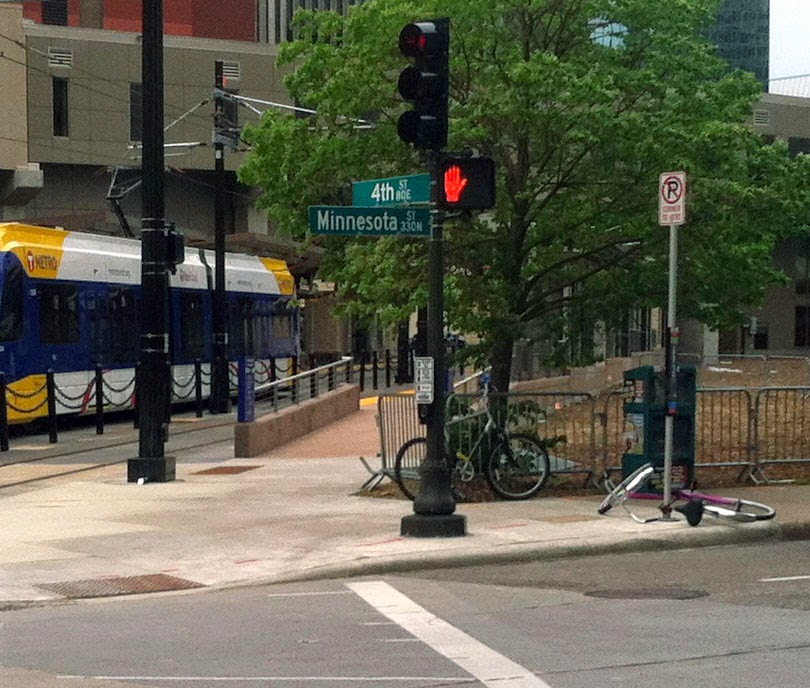 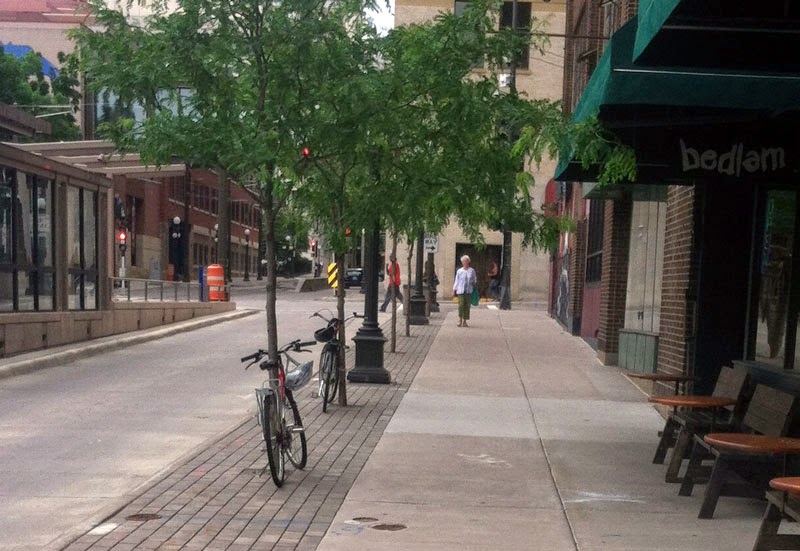 There are small racks in many of the "mid-block" crossings along University Avenue, but they hardly make up for the dearth of bike parking elsewhere.

I have issues with a lot of the pedestrian crossings along the route:

The capitol area is weird. They can fit a sidewalk along the south/west side of tracks between Rice/University and the Robert Street station, but it's not there. There also isn't a way to cross to Minnesota Street, or any sidewalks along 12th Street between Robert and Cedar.

The pedestrian crossings at Central station in downtown Saint Paul are also strange. At least as of last week, people were still mostly ignoring them and walking straight rather than the goofy zig-zag path you're supposed to take. That may change now that the service is running.

Along the entire length of University there isn't room for any street furniture, let alone adequate bike parking. The sidewalk that was installed is a substandard 10 feet wide, replacing the previous 12 foot sidewalk.

I have to admit you have a point about putting bike racks on a bike/ped mall. Have you mentioned this to anyone with money/power to install bike racks? What does the U of M bike guy say about it?

why? because people will lock bikes to trees anyway, as is obvious from looking at the photos. you can't look at the photos and say there's no room for bike racks. that's the point of the photos.

I won't disagree, Bill, there is always parking for a bike here and there. But that's nowhere near adequate, and coming up with the space we need, dozens of bikes per stop at least, will require a lot of creativity. There's hardly room to walk on the sidewalk that was installed.

Pics Eric? There's room. You just intersperse them along the route. A bike rack in front of every few businesses, a few more by the station. We're not talking about Copenhagen here. It should be automatic policy if you're trying to design a multi-modal street. It's common sense, and very cheap. Anyone who actually rides a bicycle around the city knows how it works.

I'm guessing few of the planners involved had tried riding bicycles to destinations and parking their bicycles using locks on a regular basis. Either that or bicycles are (for some reason) viewed as a menace to society?