Green Line Should be the Model for Twin Cities Transit

"It almost feels like living in Europe." he told me.

I was standing on the Hamline Avenue platform this weekend, chatting with another man waiting for the Westbound train. It was around sunset, just past the passing of a rainstorm. It was just the two of us.

"Honestly, this is just the beginning," I said.

Later, slumping into the seat on the brand new train, I had a funny feeling. Somehow, I was already used to it. Maybe it's the long three-year construction, but to me the train already felt a part of my background, a comfortable connection, blending into the city like a fire hydrant, a billboard, or an onramp.

There has been a lot of great reporting on the Green Line over the last few weeks. Maybe the most interesting for me was Iric Nathanson's historical digging about the grand opening of I-94 in 1968. It seems so difficult to imagine a time when the freeway was new. And to read the quotes from the newspapers, the freeway was met many of the same kinds of kvetching that you'll find today with the LRT.


“Monday afternoon an $80 million concrete trail with a bewildering series of interchanges will open to drivers willing to risk travel between St. Paul and Minneapolis.” Whereatt reported.

“The I 94 loop-to-loop link, constructed on the proposition that people in one city wish to visit people in the other, has no less than 18 interchanges. At some of the intersections you can get on and off. At others you may be able to get off while traveling west, but you cannot get on and go west. At others, you can get off while traveling west, but on only if you chose to go east. The entire thing is baffling to the point where the State Highway Department’s public information in not quite sure of anything except that, with great ceremony, the long awaited roadway will open."


All of these small design details turned out to be massively important. For example, the missing Westbound 94 to Northbound 35W connection meant that Cedar Avenue on the West Bank became a nearly unwalkable traffic funnel. The fact that anything remains of the Cedar-Riverside neighborhood today is a testament to resiliency and diversity. Fifty years later, MNDOT is just now beginning to fix the problems that its design created by implementing a road diet on the street.

There are a thousand like examples: St. Anthony Park, all the razed density between Franklin Avenue and downtown, the acres of "urban renewal" in Saint Paul, and a hundred others. The freeway catalyzed massive changes in the hearts of our cities, scooping out a dingy emptiness that quickly became normal. Who is left to remember what Seven Corners was like?

The Green Line will become normal too, and to ride along it is to feel the impending pressure on the land nearby. Just as the freeway eroded the value of anything it touched, the Green Line is going to change University Avenue. Parking lots will become apartments. Dilapidated buildings will be remodeled. This is all going to happen, and sooner than you think. 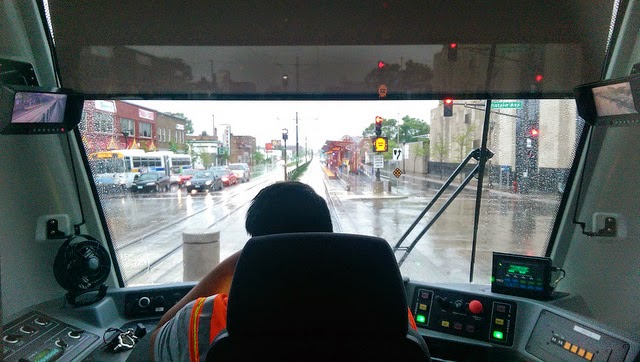 Unlike the other LRT projects, the great thing about the Green Line is that it's in the middle of a major street. Some people might see this as a huge disadvantage, causing delays and congestion for cars and transit riders alike. For me, this is the Green Line's secret weapon.

Unlike Hiawatha Avenue, or most of the proposed SWLRT or Gateway corridor routes, here the train transforms the street. University Avenue does not feel remotely like it used to. Cars drive slowly. Eventually they'll begin stopping for pedestrians. There will be crowds and clusters of people at street corners, crossing to and from the platforms. Unlike our city's other transit plans, this is an urban environmental gamechanger.

Riding along the train, I can envision the virtuous cycle taking place. As more and more people ride the train, more and more buildings will be built or improved along it, and more and more people will ride the train... With each turn of the screw, the great choking mass of cars will slowly evaporate until you have a walkable urban place. This is how to plan a transit system. It's not enough to simply add a quick transit option, you must calm traffic at the same time. Doing one without the other is weak sauce.

Transit should be planned not with a whimper, but with a bang. It should run down the middle of the road, not through a park or a freeway margin. Kinks aside, the Green Line will show us how it's done. Eventually, and perhaps not too far from now, it might just feel like living in Europe.* 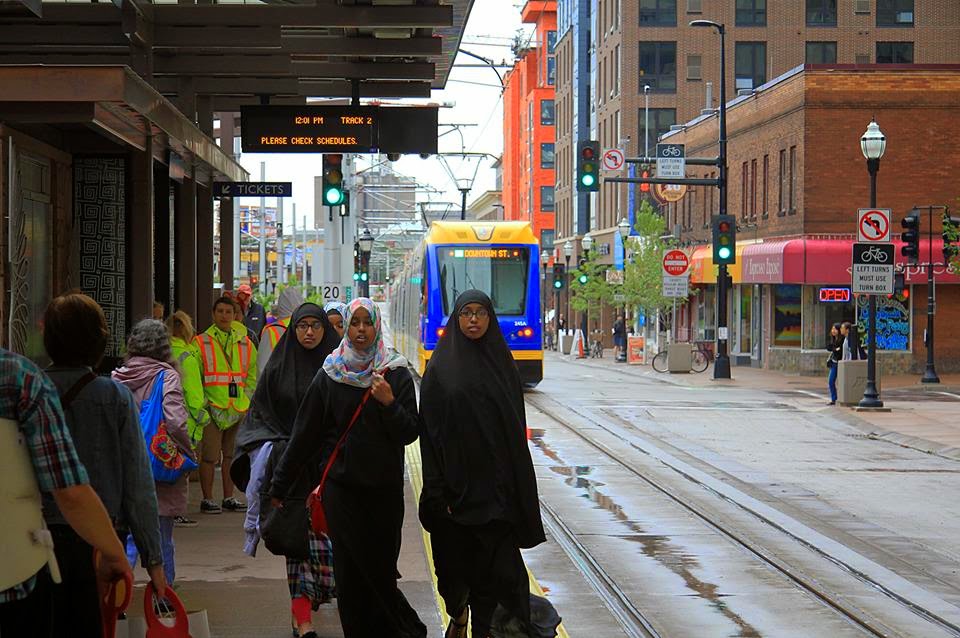 * Like Bulgaria or something, not the really nice part.