[Map from MPR's News Cut]
I've spent a lot of time in downtown Saint Paul through the years, and I've never seen so many people on the sidewalks of Saint Paul... Neither Winter Carnival, nor hockey game has ever filled the streets like last night did. People just kept appearing and flooding around Rice Park and the hockey arena* to see Barry Obama speak.

I got there about 5:30 and found myself at the end of what seemed to be a long line that snaked from the arena, looped around the Landmark Center, and ended right by the entrance to the Saint Paul Hotel at 5th and Cedar.

The line just kept growing as more and more people showed up, and I think it kind of led its own way around the downtown area, without anyone really directing which way it should go. In other words, each time the line got to a corner, there was a random chance that it would go straight, turn left, or turn right. And which way it went depended completely on which way the first person would turn. In other words, it was self-organizing! (I'm not sure of this, though, as there were a few scattered DFL people helping to shepherd particularly lost folks, and handle the intersections.) 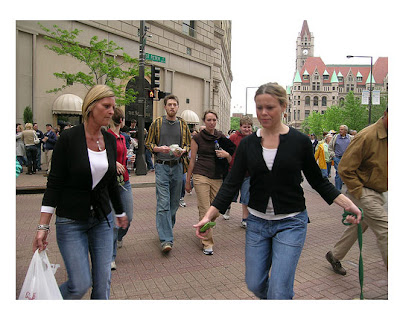 [There are no cars in this photo.]

There was even a moment when, about an hour after I'd been standing there, a rogue line formed accidentally, stemming off from one of the lines leading around the Landmark Center. As this gradually happened, the people in our line (the real line) got really upset. "Look at those people! They're starting a new line!", muttered the lady behind me. Eventually the DFL guy who was minding the corner took off his laminated badge, and giving it to one of the people in line, "deputized" a new line marshal. Then he went over to the misleading line and broke it up, giving people the undoubtedly disappointing news that the end of the line was about a mile to the East.

[The dispersal of the rogue line, which led along the right side of the photo, from the Landmark Center.]

It was amazing, though, to see sidewalks completely jammed with people for over a mile and a half. Sidewalks rarely get this kind of use, but its really amazing that they can so easily accommodate 30,000 people without much of a fuss. It makes me realize that, if you were to pack people along all the sidewalks in the city, you might be able to fit the entire 5 million person population of Minnesota along the streets of Downtown Saint Paul.

[Trash cans outside the arena overflowed with umbrellas and full bottles of bottled water.]

In fact, one guy in line behind us did a little science, and ended up counting the exact number of people standing in the half a block between the corner of 5th street and one of the streetsigns closer to Cedar. He counted 154 people in the half-block, and then together we tried to estimate how many people were in line ahead of us: 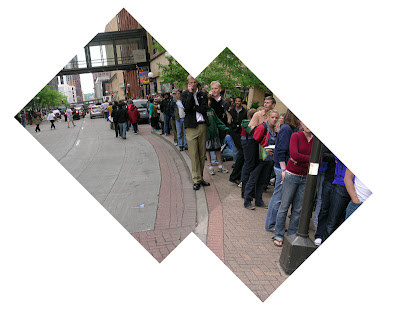 [How many people are in this picture? And where's Waldo?]

But that's the kind of thing that was happening in the line. There was a real magic in the air, and everyone seemed happy. I talked to a dozen strangers, and even though I stood there on the corner in front of Pazzaluna for over 2 hours, I barely got bored!

And that's the magic of sidewalks. A good sidewalk can shrink time. It can make an hour seem like ten minutes, and make the world endlessly interesting.

For example, here's another thing that happened on the sidewalks while we waited and slowly walked towards the hockey arena: we let loose huge rounds of cheers and applause for every cap & gown-wearing high school graduate that walked town the street.

[A recent graduate lifts his arms in triumph, as the sidewalk crowd cheers.]

There were probably a dozen new graduates that passed our line, and each time one came by someone would start cheering, and then the whole line would erupt into applause. The graduate would blush, or tip their cap, or wave like the Queen of England. The parents would smile. It was really fun.

For a city that is so often deader than a doornail, Saint Paul was absolutely hopping with life last night. 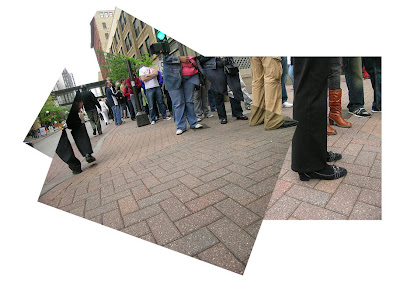 [Feets on the streets.]

* I don't like using the hockey arena's corporate name, if I can avoid it.

** And, based on the estimates I've heard from various media, we were pretty close with our estimate. We were perhaps at the line's 1/3 point, which would make the total line 21,000 people.

The speech was O.K. too.

[The view from our seats.]

Check out my friend Reid's rockin' panorama photo of the rally!

I made the newspapers! David Brauer's piece on MinnPost features me waiting in line on the sidewalks, wearing a sidewalk-eating grin. (I'm the taller, dorky-looking dude, 2nd from left, wearing the vest.)

Check out Bob Collins' wonderful documentation of the line through Saint Paul, and the excellent comment thread...

Thanks for posting this! I left work early tonight to be a part of the Obama rally. I arrived downtown at 6:15 and got in line. Boy, did I! I had no idea what was in store. I walked and walked and walked and walked and walked and walked. The line snaked throughout the entire downtown area and into Lowertown. I think the greatest thing about this experience was chatting with the people around me. Thousands of strangers walked together and it was moving to see such diversity! We all smiled and laughed and made jokes along the way. Most of us didn't believe that we would eventually get in, but we stayed in line together to just be a part of it. I'm sorry to report that I got within 5 feet of the front door of the Xcel center when the doors finally closed. Heartbreaking! I stood in front of the Jumbotron screen on the corner of Kellogg and West 7th and watched Obama's speech from there. The people left outside of the Xcel center (thousands of us!) cheered and clapped; happy to be there. I found myself in one of the photographs from this story and I'm thrilled to have some kind of record of my experience. Thanks again!

I took a rocking photo of the rally.

You totally captured the awesomness of 20,000 pedestrians taking over downtown StP. I also loved how the streets were de facto closed off afterwards, allowing us the walk down the middle of them.

BTW, thanks for snagging us that spot in line. I would have been so sad if I'd had to watch the door close in front of me like that other commenter!

i was so happy that obama made that speech in st. paul. also, i saw him on his oprah tour in south carolina. i had never done anything like that before, and it is truly amazing to see so many people, from such diversity, gather in support of a hope that something could really change. if nothing else, i really appreciate the spark obama has given back to politics.

as always, great report from the sidewalks!!