Minneapolis Privatizing its Sidewalks, Giving them to Republicans 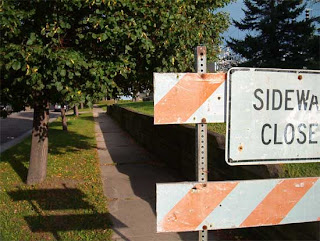 I volunteer at KFAI Radio for Andy Driscoll's Truth to Tell radio talk show on local politics, and this week's show was about a proposed Minneapolis City ordinance to allow the privatization of sidewalks.

The "free speech" ordinance, proposed by Councilmembers Paul Ostrow and Ralph Remington, would allow any group to privatize, and take over, the sidewalks if they received a permit, effectively closing the sidewalks off to other people.

While the ordinance is intended to pave the way for the OMGWTFGOPBBQ08, the ordinance is in fact permanent. It will allow for radical changes in the way that sidewalks are used in Minneapolis. Do you trust the City, or the Police Department, not to abuse this ordinance? (After all, it's not like they've banned "lurking", panhandling, walking down an alley, or dancing in the streets.)

The City Council will vote on this anti-sidewalk ordinance tomorrow, and Councilmembers Gary Schiff and Cam Gordon are planning to offer a number of amendments that would save sidewalks for public use.

If you live in Minneapolis and enjoy walking on public sidewalks, contact your councilmember here before they vote tomorrow.

(That's my plug for civic engagement.)

Anyway, yesterday we did an entire hour show on the issue of sidewalks, protests, and the meaning of the words "public space". Here's the beginning of the discussion, but there's much more at the KFAI archive. (We podcast the program too, but the sidewalk discussion isn't up yet.)

9th Ward Councilmember Gary Schiff: Thanks for having us. This series of resolutions is really bad policy for the city of Minneapolis. As you said, it does two things. It creates a permit process for people to block sidewalks. Now we are celebrating our 150th anniversary in the city of Minneapolis. Now up until now, sidewalks have been for everybody. People can use the sidewalk while walking to their apartment building, while walking to a store, while walking to a hotel, or as the city employees have been doing of late, they can picket, during their lunch hour, for a policy they see as unjust.

These regulations, sponsored by Ostrow and Remington, would allow any group to privatize that sidewalk, with 15 days notice, and essentially block other people from having access to that part of the sidewalk.

Andy Driscoll: They can actually reserve the public sidewalk for their demonstration, but that means that others cannot intrude on that territory?

Schiff: That’s correct. It clearly specifies a process to allow a permit (and I’m quoting here) “to prevent other pedestrians from using the sidewalks and crosswalks.” Why would we want to block people and change the rules that have been commonly understood? IF you’re having a large protest, if you’re having a parade, a march, you need a permit to block traffic. And we have those permits in place. But up until now you have to keep moving. You have to allow other people access, you can’t stop and block a sidewalk.

But resolution proposes that.

Simultaneously this resolution incorporates police policies for disruption of protests. That would be like treating a liquor code to allow bars and simultaneously putting instructions for how police should bust an illegal bar. These are apples and oranges. You have policies and regulations, and then you have police policies. They should be separate documents, separate at all times, and reviewed when necessary.

Driscoll: The effect of this? I’m not quite sure I see the danger of all of this?

Schiff: There will be the headquarters for the RNC in Minneapolis this year at the Hilton hotel. And as soon as this passes, the RNC will be able to apply for a permit and secure a radius around their hotel. Protestors will be … [ed. - omitted due to laziness]

So today, sidewalks are for everybody. After this passes, any group can secure a permit to block the sidewalk for their use only. That’s wrong. That’s not American

And I just want to throw out another unintended consequence of this that could be… let’s say you’re in negotiations with your security guards in downtown Minneapolis. And you hear a rumor that they’re thinking of doing some walkouts and protests in on the Nicollet Mall for example, which incidentally happened this year. In fact it was a powerful tool for the union.

So those are the kinds of things that could happen by allowing one group to get exclusive rights to hold their event.

[Ed. - There's much more of the conversation online.] 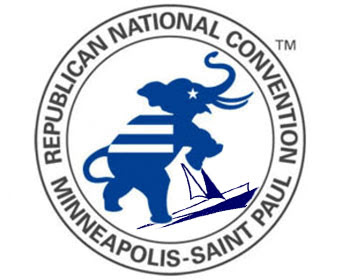 How many of the protesters are actually going to be in Minneapolis? I mean, the convention's main business is in that other city.

Well, the official Headquarters of the RNC is the Hilton Hotel in downtown Minneapolis.

So there will probably be quite a lot of "presence" there.

But, regardless, this ordinance is permanent and has no sunset clause. Whether or not the RNC will be in Minneapolis is largely irrelevant for those of us that live here 365 days / year.

According to Council member Betsy Hodges, the ordinance is only for two weeks before and two weeks after the convention.

I don't see anything wrong with trying to organize protests to avoid conflicts.

I emailed Remington, my council member, my extreme disappointment with this ordinance, which violates our constitutional rights to free speech and free assembly. I might apply for permits to privatize the sidewalks around their houses, see how they like it.