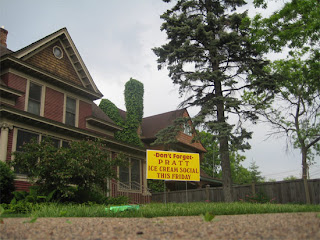 A few weeks ago I was lucky enough to be going past Prospect Park during its annual Pratt School Ice Cream Social. It was an overcast cloudy day, a bit drizzly, but it happened to be the only day of the year where the distinctive “witches hat” water tower is let open to the public. Someone in the park department manages to let the good citizens climb up to the highest point in Minneapolis, to look down on the fair city from just under the brim of the Witch's Hat. You have to wait in a bit of a line, but once you get there you're welcome to climb the near-endless spiral of stairs along with everyone else in the neighborhood. 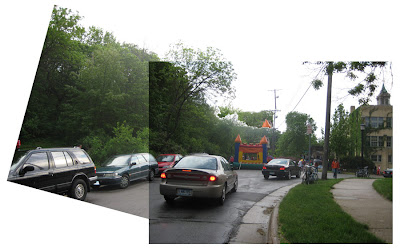 [The car's eye view of the Pratt Ice Cream Social reveals a primary colored castle looming in the distance.]

The event, called the Pratt Ice Cream Social, is a fundraiser for the neighborhood school, Pratt Elementary, which sits in the shadow of the water tower, in heart of the Prospect Park neighborhood. The neighborhood blocked off the streets for a couple blocks surrounding the school, and root beer floats, ice cream, brownies, and a variety of other kids games mixed with food, including the beanbag toss and ‘jumpy castle’.

It made me thankful for the Twin Cities’ wonderful street fair season, part of the general spirit of frivolity that comes with the onset of summer after months of wintertime stir-craziness. Like Grand Olde Day (which just ended) or a number of other festivals in various TC neighborhoods, neighborhoods through the city tell cars to shove it for an afternoon and become street fairs, or parades, and people come out of their homes and mingle with the neighbors. Even though I don’t live in Prospect Park, I saw a few folks I knew (like State Rep. Phyllis Kahn, Papa John Kohlstad, and Councilmember Cam Gordon’s assistant Robin Garwood). 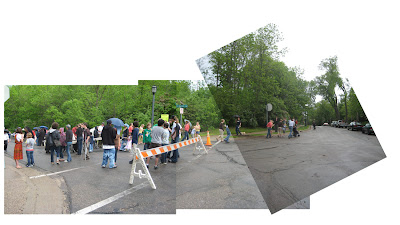 [All it takes to change your street around is a traffic cone.]

I’d really like to see more Twin Cities neighborhoods do things like this… It's really terrific to see the way that, with such a simple move like putting up a yellow-and-white striped barrier, a neighborhood can transform itself into a wonderland of street activity. That's definitely what happened along Malcolm Avenue on this particular Friday. The very same pavement that had normally served to zip cars around the curving Prospect Park streets became a place for feet, children, tables, dancing, mingling, and families. Everyone packed into this little two block stretch and enjoyed the warm rain. 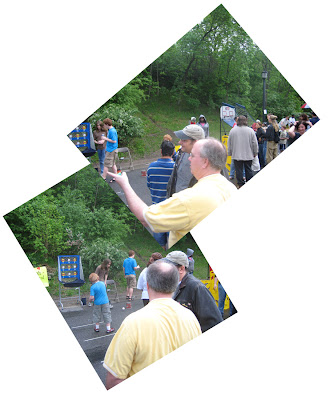 Prospect Park, though, is kind of a unique case that has a distinctive, strong, and probably slightly oppressive neighborhood identity. As I understand it, the neighborhood was threatened during the construction and planning of Interstate 94, which was slated to go right through the middle of the community (and demolish a F. L. Wright house). This caused the neighbors to band together to lobby for an alternate route, and the current compromise route where 94 runs through a concrete trench around the edge of the Prospect Park neighborhood.

Since then, the neighborhood has been dealing with the ever-encroaching presence of the University of Minnesota (and their eminent domain rights) which not only constantly tries to build new properties in the Prospect Park area, but emits an endless stream of students with rent checks looking for cheap housing. As a result, the Prospect Park neighborhood has an unusually high degree of political activism and Not-In-My-Back-Yard sensibility. 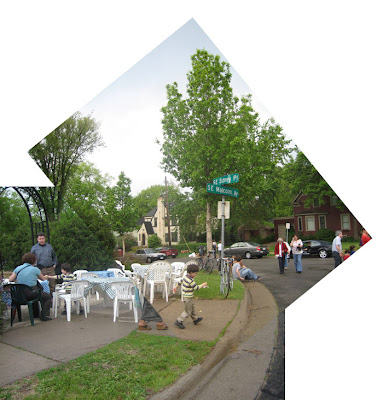 [A little kid steps on the curb and, for once, his mother doesn't seem to worry.] 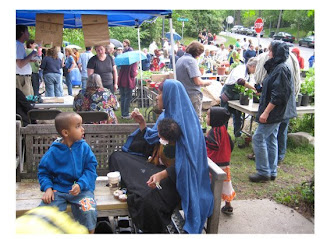 But even though the Prospect Park (and esp. its neighborhood group PPERRIA) has a clicque-ish reputation I was touched by the diversity of people who attended the Pratt social on a drizzly overcast Spring day. Young and old, black and white, wet and dry, happy and sad ... (well, nobody seemed really sad)... everyone came down to the Ice Cream Social! 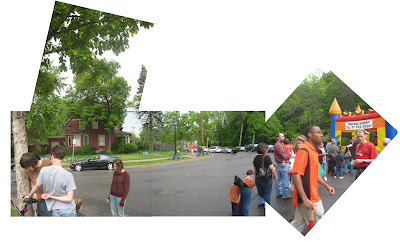 [All ages gather and mark space along the street in Prospect Park.]