The Case of the Militant Pedestrian 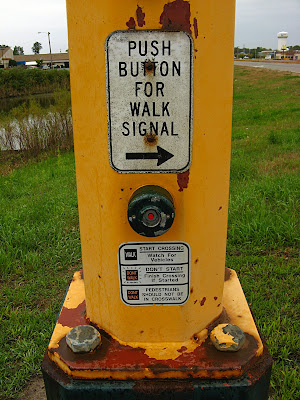 [Image from Dusty Lens]
This is a story that happened to a friend of mine a few months ago.

He was walking along University Avenue near the site of the 35-W bridge rebuilding project, on his way from somewhere to somewhere else, minding his own business on the sidewalk. Now, I should mention that the 35-W bridge area is kind of a crazy place to be these days, as particularly around Rush Hour it starts to resemble Times Square with cars streaming over the river crossing willy-nilly trying to find alternatives, trying to get onto the freeway and to homes in the Northwestern suburbs along the city streets. For a while after work gets out traffic cops man the corners every afternoon throughout near Northeast Minneapolis, waving their arms like lion tamers in a routine that must surely get painfully old for everyone involved.

So my friend is walking along and he comes to one of the busier intersections near the bridge where cars are backed up, everyone trying to turn and get onto the 3rd Avenue Bridge or onto university to head towards the freeway entrance. He's walking along the sidewalk until he gets to the stoplight, and waits there, looking over at the line of cars, looking up at the red light and the pale red "don't walk" sign as it compels him to stop and smell the flowers (or exhaust fumes, as the case may be). The corner is fairly busy, and he's standing next to another U of MN student type walking back to Dinkytown.

At last the light blinks green and the sign says "walk" and he steps off the curb. And that's when the definitive event occurs.

Apparently a car had been inching out into the intersection, trying to turn left, and ended up stranded in the middle of the intersection, "blocking the box" as cars now started coming from the opposite direction as the light switched. This car was stuck trying to push the rules of traffic a little too far, and my friend was walking through the crosswalk obeying the signs, enjoying his right of way on his way home.

The guy next to him on the sidewalk, though, said all of a sudden, "Hey wait, let this car through", and that's when my friend turned militant.

"No," he said at least as much with his body language and continued through the crosswalk on his way somewhere. "That's rude", said the other guy.

And that made it stick in my friend's head, long enough to relate the story to me some time later.

Was it rude? Who deserves to be in the street in this situation?

You have a number of people claiming space, and asserting their right to the asphalt. You have the pedestrian, walking home on their two feet, continually paranoid about being hit by cars, looking both ways and nervously occupying the margin between the private houses and the traffic flow. You have the cars on their way home, properly obeying traffic laws, who are suddenly stuck behind a car that's in their way, trying to turn on a red light. And you have the guy who's stuck in the middle of the intersection, who thought he could make it while the light was green, now desperately trying to get out of the way of everybody else.

Something's got to give, and, at least according to my friend, it shouldn't be the person on foot.

Well, who's in the right? What should you do?

In my mind, the answer largely depends on where you are. In New York City, the pedestrian is very much in the right to walk in front of the cars without thinking twice about it. There are a ton of people who are walking around all the time, the sidewalks are packed, and the pedestrian population has achieved a "critical mass" that allows it to assert and claim for itself the space between the crosswalk lines. (New York recently passed a stringent "don't block the box" law that assigns steep fines for cars that get stuck in the middle of intersections in situations like this, meant to discourage overly-aggressive driving.)

In most of the Midwest, on the other hand, it's a lonely man who walks the sidewalk. Cars turning left almost always get their way by cheating through the intersection.
Posted by Bill Lindeke at 3:45 PM

One of my favorite aspects of city life is that so many people, in such a small area necessitates compromise.

I personally think stringent rule following is more of a suburban mentality. I think you friend should have let the car move out of the intersection. Certainly the cars would have returned the favor by allowing him to finish crossing.

Often there is no left turn green arrow and pedestrians start crossing immediately when the light turns green and keep going until red, preventing left turns. Thus often the only time you can make the left turn is when the light finally turns red.

While technically the car was not breaking a law, or in the wrong, the pedestrian, especially in a crosswalk on a green light, always has the right of way. I personally do not put my body in front of a car, even when I have the right of way, because a militant car will trump a militant pedestrian in a collision, but I have been stuck in the intersection waiting to complete my turn, and had to wait for the pedestrians to clear the way. It means I get honked at, but that's life. The worst intersections for these kinds of interactions are in my neighborhood, Uptown, where I have had drivers almost mow me down when I was already halfway across the street because they were trying to beat traffic on a left turn and looking the other way. That's when I wish I carried a golf club.

I live in Utah where left turns are always yields and cars are always "blocking the box." It's so annoying, especially when these situations come up for lone pedestrians, such as myself.

But I would have let the car go. I'm not that brave.

Love your blog, by the way.

No matter who was right, a edestrain simply isn't a match against a 1/2 ton of steel and plastic. Too many drivers out there gabbing on their cells, not paying attention. You never know what will happen at our intersections here in the Twin Cities. So many people run the red lights. I probably would have waited, the safest bet.

Cool, thanks for thinking my pic worthy of using here.

I wrote an article for article magazine last year on militant pedestrianism. I think you will enjoy! Glad to know I am not the only one considering these things

My ...irritants.
1. Drivers who think bike lanes are their personal parking spaces.
2. Drivers (including law enforcement) who think that traffic signals and traffic laws are mere suggestions. This includes the same law enforcement vehicles ignoring the NTOR sign in front of the local government building every day.
3. The drivers (who can't) that start to make a right turn across my path, and then stop while yelling "I won't hit you...". Prove that you won't hit me by not starting a right hook turn.
4. Drivers who pull out of a side street, and then back up when they see a car or bicycle approaching. A guy did this morning, and ended up backing into the car behind him. Karma may be a female dog, but I still like her.
5. Phone zombies of all varieties. There are too many too list.
6. Bicyclists who strap an overly bright flashlight or strobe light to their handlebars that blinds oncoming riders and drivers. There are inexpensive STVZO bike headlights on Amazon that have focused beans that allow you to see and be seen without blinding other drivers and riders.
7. Walmart headlights and tail lights that have one candlepower, and that require an Act of God to be seen.
8. Bicyclists who are trying to get a Darwin Award by riding the wrong way, using their phones, ignoring traffic signals, and/or wearing earbuds/headphones while riding in rush hour traffic.

An excellent list! I would go easy on cyclists and their lights. The balance b/w too bright and too dull is hard to strike for many people without easy access to gear etc.