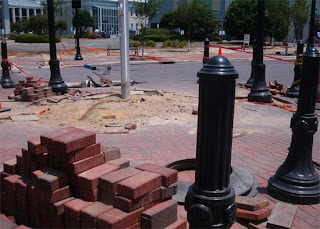 [On top: the Durham sidewalk project one year ago. On bottom: the same sidewalk today.] 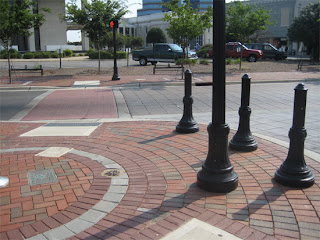 It's been a while, and I'm traveling the country by train again, spending some time revisiting Durham, North Carolina (among other places). Extremely devoted readers of this blog may remember a report on the sidewalk restoration project in downtown Durham that I wrote about last year.

Well, the sidewalks are finished now, and Durham looks fabulous. There is still little sign of much increase in economic activity here,r though, as the slow condo economy has prevented much investment in the historic buildings in this very auto-oriented Southeast environment.

But its a nice place to walk around, and it hasn't been too hot. Plus, Durham Bulls games are a fabulous treat.


Driving around so much in my rental car, I'm really experiencing life on the road for the first time in a while. It makes me appreciate this recent post by the Strib Roadguy about the rules of the road.

Car 1: A law-abiding citizen, this driver went at or below the speed limit for many miles on a curvy road with few or no spots to pass. Never engaged in risky behavior, never pulled over to allow faster vehicles to get past.

Car 2: Unwilling to accept his fate stuck behind Car 1, he apparently had no ability to learn, as the butt-crawling never worked, yet he persisted.

Car 3: A large vehicle with the longest stopping distance, it had nothing to gain by riding closely behind Car 2.

I intentionally drive at about the speed limit, like they do up in Canada. I guess that makes me annoying.

You can see the lengthy discussion of this situation on the Strib site. It's an interesting mediation of the different perspectives of road behavior. It's amazing how much time we spend as a culture thinking and talking and thinking about all the microscopic details involved in driving on roads. It only makes sense given what a big part of our lives auto-commuting has become.

But still, driving is inherently boring! It's dull, dull, dull! You just sit there, and occasionally you move your arm. You can't even turn your head and look out the window for fear of plowing into something. It's probably the least interesting thing you can possibly do with your time. Sure there's a certain peaceful serenity to the experience, but were it not for the car radio, people in cars would be the functional equivalent of zombies.

Spending a great deal of time thinking about driving a car seems like a great deal of wasted energy to me. Wouldn't it be far better to be reading a book while riding a train?


I helped with the video shoot for this short video on Saint Paul's Instant Runoff Voting campaign.

As the local notables suggest, IRV or Ranked Choice Voting is a great democratic system because it:

Now, it turns out there's some pushback from some of the Saint Paul city officials, who claim that IRV/RCV is too expensive or illegal. I'd like to think that it's simply a matter of concerns in a tight budget year, but isn't it likely that some Saint Paul councilmembers are concerned about job security in the new, more democratic environment?

(Turnout for city elections in both Saint Paul and Minneapolis is terribly low!)


Ridership is up on Metro Transit, of course.

In the Twin Cities, 11 percent of commuters have blown past their break point of $3.50 per gallon gas and already are making changes. Another 27 percent are poised to make changes if gas hits the $4 mark.
We're nearly there with the average price of regular unleaded in the Twin Cities at $3.82 a gallon, up 39 cents from a month ago and 68 cents from a year ago, according to AAA. Twincitiesgasprices.com, a Web site that compiles reports from members, showed prices above $3.90 at several area stations Thursday.

And if the price hits $4.50 per gallon, more than half of the commuters in the Twin Cities said they'll be looking at changes in their daily commute.


Even if people want to look at alternatives, the unfortunate truth for the vast majority of TC residents is that there aren't any alternatives to the long car commute. Most people live in houses ill served by any sort of public infrastructure, far away from sidewalks, corner stores, or transit. And most jobs have moved away from the kinds of places that can be easily served by mass transportation. For example, the "third downtown" along the 494 in the Southwest Metro is composed mostly of a series of isolated office parks and stand-alone buildings. How will people ride transit to jobs at the Best Buy HQ, to give but one example? 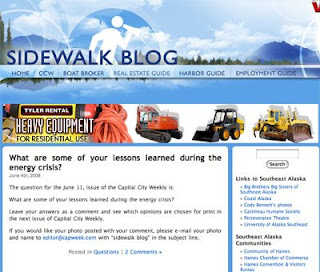 Here's another blog about sidewalks from an Juneau, Alaska newspaper, called Sidewalk Blog.

It's not really about sidewalks, unfortunately.

It's mostly about hiking, environmentalism, and energy issues.


Adam Platt puts the finishing touches on the U of MN's trouble with trains.

The bottom line is the U almost (still may have) jeopardized federal funding for the most important public transit effort of the decade simply because it doesn’t want to have to deal with traffic mitigation issues on Washington Ave., which will have to close to cars.

If the U is actually the intellectual hub of our state, the place where the most unbiased, forward thinking happens, might anyone there have noticed gasoline is $4 a gallon? Might they not have wondered if many of their students living hand-to-mouth and middle-income staff and faculty driving gas-guzzling cars or riding buses in freeway gridlock might not benefit by an LRT line through campus built sooner rather than later? 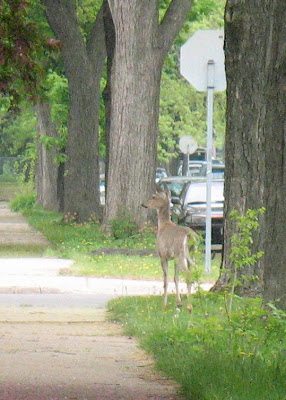 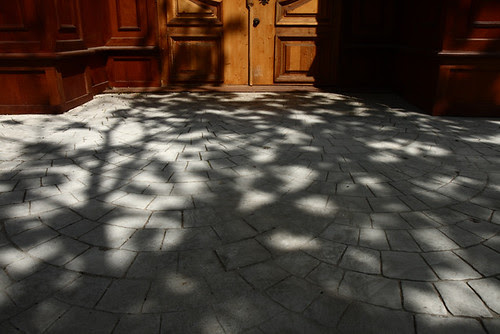 Actually, Best Buy is one of the easier places to get to by bus-- Route 535 travels limited stop down the I-35W corridor. It's kinda slow right now due to all the construction detours, but that's temporary. There is connecting service that can get you to most employers along the 494 corridor. It's the more isolated suburban workplaces that are much trickier to serve with transit effectively.

Does anyone actually use those bus services? I wonder how effective they actually are?

I only mentioned that example because that's what a Met Council honcho once told me, as a good example of a concentration of TC employers that isn't quite concentrated enough to be accessible by transit.

Interesting dilemma, though. How to turn the 494 stretch into a "real downtown"...