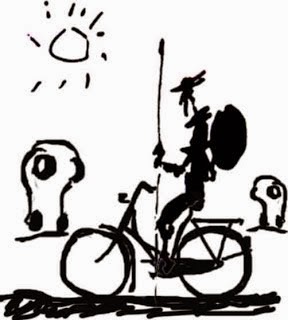 It turns out that sitting in a grassy median in a light industrial district by a bridge for two hours isn’t quite as bad as sitting in a vacant lot on a hill by a state highway for two hours. Last week I was again recruited by tricksy Saint Paul engineers into participating in the annual city-wide bike/walk count.


Getting hold of statistics for non-cars is quite difficult because people, bicycles, and buses aren't very predictable. There are a few options. You can use cameras, but that's expensive and time consuming. (Someone has to watch them!) Another option is rigorous surveys, but that’s also expensive and usually only happens through intrusive long-form-style census data. (E.g. the ACS commute data numbers.)
That’s why Minneapolis and Saint Paul’s annual bike and walk counts are so important. They provide valuable data that advocates, politicians, and city staff can use to justify and demand better bike lanes and sidewalks. They provide much-needed feedback in the process of changing our streets, something we can point to on a chart or graph. We've been doing these counts in the Twin Cities since 2007 and (at least in my cursory survey) it's pretty rare for a US city to have such a good set of longitudinal numbers.


Two Hours in an Industrial Park

Perhaps the all-powerful bike lobby took pity on me. After the torturous hell of the Robert and Cesar Chavez, this year I was lucky to be placed at the corner of Wabasha and Fillmore. Because it’s on the downhill side of a bridge crossing, I hoped for a modicum of people rolling from downtown into the vacant lots and half-empty concrete buildings of the West Side Flats.

And after the the Niagara torrent of cars last year, I was not completely disappointed. Nested on my  “natural” industrial park grass, I faced the West Side Flats apartments, the only new residential building to be built in the flats for half a century. It is hopefully a sign of things to come. Its shiny facade, empty balconies, and even emptier first-floor retail space lent hope to the surrounding unwalkable wasteland. Over the next few hours, a few thoughts popped in my mind. The Wabasha Street Bridge slants steeply from high up the downtown bluff to the east edge of Harriet Island. It’s also the newest (major) bridge in Saint Paul, at just over a decade. As people gravitated down the wide sidewalks, growing from ants into real people, my first thought was to wonder where these white collar workers with their backpacks were going. Why were they walking down largely deserted Wabasha?

My guess is that most of the people were walking to their cars. In good Costanza tradition, free parking can be found on the West Side Flats if you walk far enough past the vacant lots.

The second thought was that the wind was blowing in the wrong direction, so that the smell of blood from the nearby Red Cross blood bank HQ drifted over the area. It’s easily one of the most disconcerting smells I encounter on my wending way through the city. It makes me uneasy, but I suppose compared to a slaughterhouse or a tannery, it’s not that bad.

Thirdly, I happened to be placed at the exact spot where the bike lane disappears and needlessly throws bicyclists into traffic with the fast moving cars (speeding down the bridge). This is one my most glaring "bike gaps" in the city of Saint Paul (which is saying something), and perfectly illustrates the importance of paying attention to gaps and continuity when designing bike lanes. Time and again over the hours, I watched cyclists come down the bridge bike lane and veer up onto the sidewalk, or deal with aggressive driving.

Finally, sitting there and watching the bridge bow down from downtown, I kept thinking about my recent visit to Copenhagen, Stockholm, and Helsinki. I imagined what this place might feel like in one of those transit-friendly, walkable, bikeable cities full of six-story buildings, wide sidewalks, and street life. What if there were actual places to walk to and from? How different these streets would be!


Me and Don Quixote

I should add that, over the last few weeks, I’ve been reading Don Quixote. The book has long sat in the “to read” pile on my shelf. And though I’d never actually read the book, the term “quixotic” has long been one of my favorite words to use.

Before reading the book, I’d always thought “quixotic” meant “someone who fights a lost cause.” I’d cheerfully referred to US bicyclists, documentary filmmakers, or anyone attempting to end capitalism as being particularly quixotic in nature, people who spend days “tilting at windmills” and losing over and again. Counting bikes on an American arterial had seemed to me a quintessentially quixotic enterprise, devoting ones life to the mundane and microscopic, and imagining these things to be deeply important.

Maybe it was the desolate landscape or the smell of half-baked blood, but actually reading the book while sitting on the street corner, I changed my mind about what is and is not quixotic. I began to believe it had nothing to do with lost causes, but instead someone lost inside a beautiful delusion.

For example, sitting on the corner, I paged through the second section of the book, where a group of Don Quixote’s friends attempt to lure him back to his village by humoring him. Like Sancho, they join in to his fantasy of being a gallant knight on a noble quest, in order to they try to persuade Don Quixote to return home.

One night, as they’re sitting around eating dinner an an inn, Don Quixote gives the following speech:


And so they supped in high enjoyment, which was increased when they observed Don Quixote leave off eating, and, moved by an impulse like that which made him deliver himself at such length when he supped with the goatherds, begin to address them:

"Verily, gentlemen, if we reflect upon it, great and marvellous are the things they see, who make profession of the order of knight-errantry. Say, what being is there in this world, who entering the gate of this castle at this moment, and seeing us as we are here, would suppose or imagine us to be what we are? Who would say that this lady who is beside me was the great queen that we all know her to be, or that I am that Knight of the Rueful Countenance, trumpeted far and wide by the mouth of Fame? Now, there can be no doubt that this art and calling surpasses all those that mankind has invented, and is the more deserving of being held in honour in proportion as it is the more exposed to peril."


The irony is, of course, that Quixote and his friends are actually a bunch of drunken bums in rags gnawing on old bread. Sitting there counting occasional bikes, I realized that, if anyone is living in a land of delusion, it might be those that convince themselves that our cities are sustainable.

In other words, most of our plans are full of quixotic, flowery language about recycling, environmentalism, sustainability, or glorious bike-filled futures. Meanwhile, the vast majority of the country drives everywhere and walks only as far as the next free parking spot. Meanwhile we continue building roads and parking lots that lock us into the fossil fueled, earth-roasting future, while the non-motorized mode share dwindles asymptotically near zero.

Translated into the present moment, Don Quixote might say this:


Verily gentlemen, if we reflect on it, great and marvelous are the things seen by those who make profession of the order of bike counting. Who in the world, if he entered the gates of St. Paul at this moment, would suppose or imagine this to be a top bike city in the country?

We can’t be a sustainable city and keep expanding our freeways.  I’m as guilty as anyone, but to say otherwise seems like self-delusion.

Dud I counted there last year can you send me a copy of your count sheets?
JEff Z

Be not careless in deeds, nor confused in words, nor rambling in thought..
jaket kulit kerajinan garut bermutu
jaket kulit murah ala lombok

For Beginners A Complete Guide To Cycling Cyclato