The Case for the Saint Paul Flag

A few years ago, my friend and fellow literary perambulator Andy Sturdevant did a wonderful job exploring the vexillological landscape of each city’s downtown. He cataloged and described all the downtown flags he could find, including the Minneapolis City flag, the UN flag, the Minnesota state flag, and the US Army Corps of Engineers flag.

Both were great columns, but one of Andy’s key points was that the Saint Paul city flag was missing:


The one flag you never see is the flag of the city of St. Paul.

Or perhaps I’m just not seeing it. Biking from Lowertown to the edge of Frogtown, I couldn’t find a single one flying anywhere. Not at City Hall, not at the Capitol, not outside the Landmark Center, or the Post Office, or any of the courthouses, or Pioneer Press headquarters, or anywhere else closely affiliated with the city where you might expect to see its flag.

[...] It’s not a bad flag. I’m really surprised there don’t seem to be any examples in downtown St. Paul. Even the relatively obscure Minneapolis city flag turns up in at least three locations in that city’s downtown.

This summer, inspired by the piece, a friend of mine went out and fixed this problem. Together, he and I and a few others around town ordered a batch of Saint Paul city flags. And for the last few weeks, I’ve been flying mine proudly from my back porch. And ever since, I’ve actually found it having an odd effect. Normally, I have mixed feelings about my hometown: Saint Paul is a beautiful city full of amazing people. But it can be a frustratingly backwards. It has a lot of potential that somehow ends up seeming like less than the sum of its parts.

But ever since my Saint Paul flag started flapping in the wind, I’ve somehow found myself feeling better about living in the capitol city. I believe that, in the world of city flags, the Saint Paul flag is solidly above average. It has a neat back story, decent design features (pretty much), and somehow makes people feel more optimistic about Saint Paul. I like having it.

And you can order one too! I have a few to sell right away, and will be taking orders for a new batch. They run about $45 (depending on how many orders we get), and will come in two sizes.

Information on the Saint Paul flag is actually a bit difficult to come by. As Sturdevant points out, the flag isn’t flown in very many places. There’s one in the Mayor’s office and one on the 1st floor of City Hall.* There’s a company selling flag tee shirts.

The Mayor’s office does actually have flier on display with some information about the flag. Here’s what they say:


Saint Paul had a flag contest back in 1932 and Gladys Mittle was chosen as the winner of the best design of the Saint Paul flag on November 22, 1932. Her prize for the best design was $150.00. Gladys was an art student at the College of St. Kate’s.

I like this story. Apart from a page in Polish, there is absolutely no information about Gladys Mittle on the internet. I wonder what she was like. I wonder if she lived long enough to see her flag completely forgotten by the city around her. She is Saint Paul’s Betsy Ross! 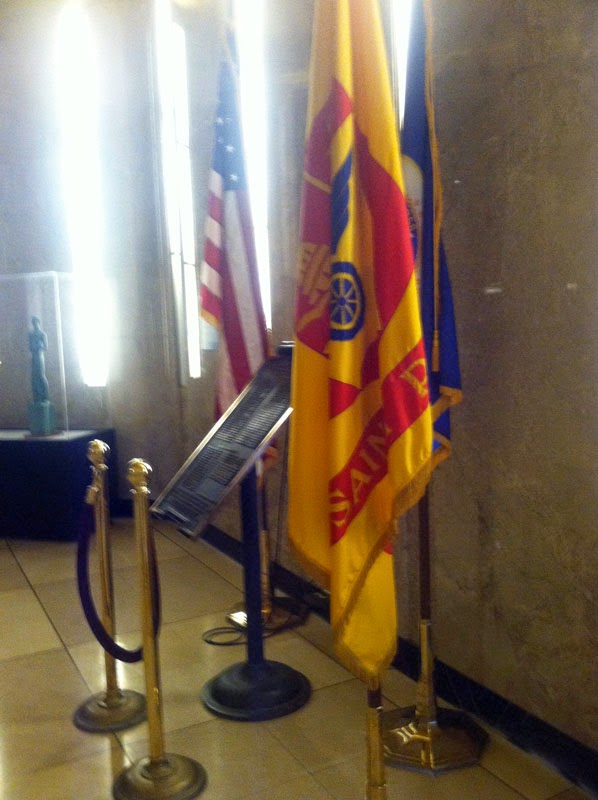 The Saint Paul flag’s design is not bad, and many of the folks I’ve show it to seem to like it.  In his piece, Sturdevant had this to say:


I actually sort of like the St. Paul flag, more than its Minneapolis counterpart. Sure, it’s a little silly and over-literal. But it looks more or less like a flag should: It’s three primary colors, there’s a north star, and there’s a shield. The log cabin is a nice, meaningful touch. I’m not sure what the story is with the winged wheel – is it a steamboat wheel? A nod to the city’s early automotive industry? – but at least it’s not a microscope [like the Minneapolis flag]. It has the same problem that any flag with text on it has, which is that it reads backwards half the time. But even then, at least the text is written in the Windsor typeface, which is what Woody Allen uses in the opening credits of his films.


Coming from an artist critic, that’s high praise. (For a more clinical description, check out John Purcell's encyclopedic book on US city flags.)

I happen to like the Saint Paul flag’s color scheme, which are the same basic primary colors you might find on road signs in Europe, or the “stamp out smog” footprint logo. Both of those things are cool. Sure its not Chicago, New York, or Baltimore, but compared to the usual color schemes, there's something cheerful about this one.

In addition, there some symbolism hiding behind the red-and-blue crest. Again, this comes from the Mayoral info sheet:


None of those things seem particular offensive, at least not when compared to the Minnesota state seal.

The cabin referred to here is the the first true house in Saint Paul, built by the priest who gave the city its name.

The winged wheel, in particular, reminds me of the Detroit “red wing” logo, and the Teamsters horse logo. Of course, I’m not a huge fan of automobile transportation, and would advocate for replacing this wheel with a bicycle wheel. But, in general, we might all agree that the wheel was a decent invention.

(It’s worth noting that Saint Paul also has one of the better civic logos in Minnesota.)

Saint Paul has long had a bit of an insecurity complex that, I believe, has done the city no favors. People seem really defensive about change, and quick to throw stones at ideas that come from elsewhere (especially if that elsewhere is Minneapolis).

While I agree with some of the sentiment, too often our sense of identity borders on the reactionary. Perhaps if Saint Paul-ites had a more positive vision of our city, we might be more willing to try new things. For me, at least, a sun-spangled city flag is a step in the right direction.

As of today, I am taking orders for Saint Paul flags. You can get one of your very own. The size that I have is “full size,” 5’ wide by 3’ tall. That’s pretty big. Depending on interest, we’re also going to order a smaller size with maybe 3.5’ by 2’ dimensions. Cost will be in the $45 range.


All things considered, our flag is pretty good. Saint Paul should let it fly.

Send me an email and let me know if you want a LARGE or a SMALL, and how many you would like!

* Though oddly, without the blue stripe in the background.
Posted by Bill Lindeke at 11:07 AM

Bill: Nice effort but I gotta disagree. It's not a very good flag, or very special. And, yellow? Not a color anyone associates with St Paul... maybe with Corn Capital Days in Olivia, but not St Paul. Also, by the way, St Paul is the Capital City. Not Capitol.

We just moved to St. Paul, and getting a flag has become a priority! My husband got a tee shirt, but there's nothing like a flag. Thank you for telling us the symbolism. We were puzzled by the wheel!

I though I could be a real Richard.

When is the order deadline?

I like it! Here are my votes for MN's best and worst: