Together We Can Rename Lake Calhoun

Minneapolis, I hate to break it to you, but you have a serious problem. At the very heart of the great city of lakes, the very sanctum sanctorum, there sits a festering wound, a rotting stench, a giant stinky turd.

What am I talking about?

No, it's not the lake itself. The lake itself is pretty near perfect, a gorgeous jewel in our city, open to the public, walkable, eatable, sailable, enjoyable. Lake Calhoun itself makes other cities green with envy.

The problem isn't with the water, the problem is the name of the water. No matter how many times you go watch Twelve Years a Slave, Lake Calhoun will still be named after John C. Calhoun, the most pro-slavery politician in US history.


Who is John C. Calhoun?

John C. Calhoun was an early-American politician from South Carolina who basically started two different wars because he was such a dick. He singlehandedly led the US into the war of 1812, and helped set up the battles over slavery that led to the Civil War. As a senator, he was one of the key pro-slavery voices, pushing for such things as the Fugitive Slave Law, states rights, and defending slavery on moral white supremacist grounds.

Here's one of his more racist quotes:


I hold that in the present state of civilization, where two races of different origin, and distinguished by color, and other physical differences, as well as intellectual, are brought together, the relation now existing in the slaveholding States between the two, is, instead of an evil, a good -- a positive good.


Yet our most popular lake, one of the prime symbols of Minneapolis, is named after him. Something must be done!

There are really only two options. First, we could re-name the lake. That sounds fun, and I'm sure we could come up with lots of great lake names. Round Lake... Wet Lake... Ricki Lake... Lake Property Values...  But it would be quite the change, and would involve new maps, new signs, a whole new identity for Uptown Minneapolis. Plus John Winters tried that and didn't get very far.

So I prefer the second option: rename the lake after a different Calhoun. This way we don't have to change the name of the lake, but simply change the Calhoun to which the name Lake Calhoun refers...

After many days and nights poring over dusty books in the library stacks, I have identified five alterna-Calhouns for your consideration. Let's meet them! 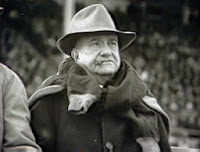 George Whitney Calhoun -- G.W. was a sports journalist and editor for the Green Bay Press-Gazette. His claim to fame was that he co-founded the Green Bay Packers along with Curly Lambeau. He was the Packers' press director for decades, writing a weekly program called "The Dope Sheet." There are lots of reasons why the Packers are a superior football team to our hometown Vikings, and naming our lake after GW Calhoun would be a great way to stick it in the eye of Zygi Wilf and his dubious boosters.

John B. Calhoun -- (This Calhoun is nice because you only have to change one letter of the name, from a C. down one letter to a B.) John B. Calhoun was a famous scientist who made a huge impact on the collective psyche of the US. Basically, he forced rats to live together in incredibly dense conditions in a barn in Maryland. J.B.C. then described the way that they ate each other and exiled their young. He called it a "behavioral sink", and policy makers around the world used his research to argue against overcrowding in cities and prisons. Calhoun's studies justified razing old US downtowns and creating suburbia, both things that Minneapolis excels at. Naming our most popular lake after him would be a lovely ironic tribute.

Milburn E. Calhoun – Milburn E. Calhoun, along with being the Calhoun with the greatest name, was a Southern book publisher who ran a publishing company called Pelican out of the small city of Gretna, Louisiana Milburn specialized in publishing books on Southern culture and history, but his big hit was being the first publisher to take a chance on the self-improvement titles of famous motivational speaker Zig Ziglar. He also published a Cajun Night Before Christmas, a bunch of cookbooks, and other titles that did a lot to preserve literary culture in the South. If we want our lovely lake named after a Southern Calhoun, this is probably the one to choose.

Kutt Calhoun -- (One potential problem: it's generally inadvisable to name things after people that are still alive... But given that this Calhoun's already-existing reputation, here it hardly seems to matter.) Kutt Calhoun is a rapper from Kansas City. You may know is work from his 2010 album Raw and Un-Kutt or his 2008 record, Feature Presentation. His biggest hit is probably "Naked (Boom Boom Room)" a subtle homage to fornication that involved collaboration with his friend and fellow hip-hop artist Tech N9ne. It's safe to say that no alterna-Calhoun presents such a cultural transformation as that represented by Kutt, so if we want ol' John spinning in his grave, this is the way to do it.

Haystacks Calhoun -- Haystacks Calhoun is easily the largest Calhoun on this list. As a young man growing up in Texas, he weighed three hundred pounds by age 14. He just kept eating prodigiously, and by age 20 he was six hundred pounds. As the undoubtedly fallacious story has it, sometime in the 50s traveling wrestling promoters saw Haystack working on his farm by physically picking up and moving cows around. They signed him to be a pro wrestler, and he enjoyed a decade-long career, acquired the nickname Haystacks, and adopted a hick persona. Retiring due to inevitable health problems, he eventually lost one leg to diabetes and died in a doublewide at the age of 55. Naming a lake after him seems like a nice gesture. (Bonus: Haystacks was kinda shaped like Lake Calhoun.)


That's it! Take the poll and let's get'er done.

Update: After writing this post and making this poll, many more Calhouns have come to my attention! So, consider this Calhoun election merely Round One of a quasi-democratic process to select the most lake-worthy Calhoun. Hopefully the next round will even have a woman Calhoun for your perusal. If you know any Calhouns, send them my way.

Which Calhoun do you most prefer to John C. Calhoun?

I want yet more Calhouns to choose from! sorry

UMPress said...
This comment has been removed by the author.
2:28 PM

UMPress said...
This comment has been removed by the author.
2:30 PM

Ridiculous waste of effort based on inane retrospect. George Washington and 14 other signers of the Constitution owned slaves. Maybe we should throw that out also. - oh wait. The lake is named after United States Secretary of War, John C. Calhoun, who sent the Army to survey the area that would become Fort Snelling in 1817. Calhoun had also authorized the construction of Fort Snelling, one of the earliest settlements in the state. The surveyors renamed the water body "Lake Calhoun" in his honor. How far do we take the witch hunt over slavery? Burn down Fort Snelling because it was part of Calhoun's legacy? Rename it Fort Bill? Burn all the history books that mention slavery? Wasnt' Hitler trying to do the same thing - erase the Jews?

I laughed so damn hard at the description of John B. Calhoun. No prizes for guessing who I voted. Bravo, Bill!

Thanks for the history, but I agree there should be more options in the pool. Any women Calhouns? Or better yet, have a naming process led by the original peoples of the land?

B) those who fail to remember history are doomed to repeat it.

Unfortunately, the name already was changed to no effect. In 1890, the Park Board voted to change the name to "Lake Mendoza," (an Anglicized corruption of a Dakota name) to avoid honoring John C. Calhoun. It seems no one stopped calling it "Calhoun," though, and the old name was officially reinstated in the early 20th Century.

The 1890s-1910s was a time when the generation that fought the Civil War was being romanticized as having fought the good fight; Grand Army of the Republic halls and monuments to the Union were being erected across the North. If that generation, with a much fresher hatred of John C. Calhoun and all he stood for, failed to change the name, I'm afraid there will be little success today. People are used to calling it Calhoun.

Here's a Mpls. Tribune article from the time (note that this author was so embarrassed at the connection to John C. Calhoun that a fictional "Lt. Calhoun" is claimed as the original namesake; this is false):