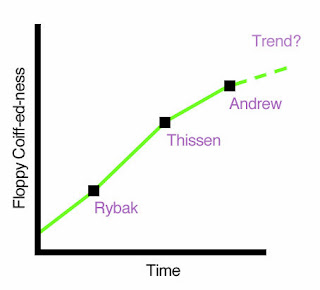 Yesterday's election day proved a decisive blow to one of the most pressing problems in Minneapolis: the disturbing increase in coiffed floppy white hair in its elected officials.

Ever since RT Rybak took office and began graying (an inevitable byproduct of the burden of power), Minneapolis political hair has been increasing in size, whiteness, poofiness, and floppyness. But yesterday's election proved that Minneapolis voters have had enough. The broad support of Hodges is further sign of a demographic sea change in Minneapolis, as younger, older, and less white voters came to the polls to vote against the carefully feather'd layers of candidate Mark Andrew's follicles.

Until recently, many believed that popular four-term mayor R.T. (Rootin' Tootin') Rybak had grown a strong legacy in Minneapolis hairstyles. During his multiple years in office, Rybak's hair proved to be one of his leading qualities, combining with his piercing blue-grey eyes to form a strong presence in City Hall. Rybak expertly used his hair to foster support for issues from gay marriage to the Viking's stadium, notably aiming his hair toward an audience during a "stage dive" during the 2008 presidential election.

Rybak's legacy proved to be widespread in Minneapolis politics, particularly when Minneapolis State Representative was chosen as Speaker of the State House by displaying a Rybak-ian coiffure during the 2012 election.

Conventional wisdom at City Hall and the Hair District in Edina had been that Mark Andrew would be heir to the Rybak crown, out-doing the incumbent on a number of key hair metrics. Andrew was seen around town displaying his tousled semi-locks at events in front of a green Toyota Prius, color-matched to emphasize the Andrew's gently layered white.

But changing demographics and a contested campaign changed all that as Betsy Hodges ran a successful upstart campaign displaying hair of an entirely different nature. But as election day drew to a close, it became all too apparent that Andrew's campaign promises were not enough to continue the trend in Minneapolis. According to political expert Larry Schultz, "Yesterday's results show that brown eggs are more popular than white ones. They are perceived to be more natural." No matter what the reasons, years from now, we may look back on yesterday's election as a parting blow to the city's long-standing hair-raising trend.
Posted by Bill Lindeke at 11:48 AM