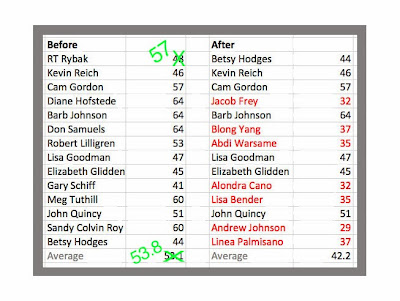 [Here I offer the unusual caveats about Ranked Choice Voting and how we don't really know who is going to win the close races in Wards 5, 9, and 13. Consider it stated.]

That said, it's worth pointing out the average age of City Hall has gone down quite a bit this week. We've replaced older people with far younger people, moving the average age of our city officials down over a decade, from 53 54 to 42.

That might not seem like much, but given the window of opportunity for public service, this is quite a big deal. (To elect someone under the age of Andrew Johnson, for example, is very rare.)

FYI, the average age in Minneapolis is 33.7.

Age isn't everything, of course, any many of the incumbents are "young at heart." But sometimes age is important. As everyone who has ever had parents knows, there are big generational differences about the importance of computers, cars, "quality of life", etc. It'll be interesting to see how and if Minneapolis starts to "act younger" with its decision-making as the new council takes the reins.