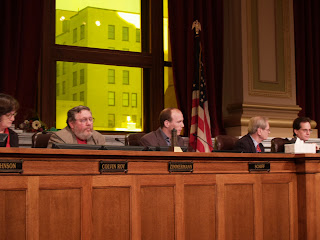 So many engineers in the room today. Very exciting meeting going to be covering not one but two just one streetcar projects PLUS the final approval of the Minnehaha reconstruction.

Not to mention the presence of many LAME DUCK council members, recently booted from office by disgruntled voters.

Despite the signs stating "no food or drink in the council chambers," many of the well-dressed people in the audience ARE carrying coffee cups.

9:36: Not many council members here as of yet. Where is CM Robert Lilligren (RL)? Where is Mayor Elect Betsy Hodges (BH)? Are they skipping it? I was hoping for some exciting fireworks from RL.

9:38: Very boring the way that SCR just reads the consent agenda, but I suppose that's normal.

9:42: Allocating what has to be the last of Mpls's NTP TLC bike federal earmark money for the Bluff Street trail project.

9:43: "Aesthetically improving the impound lot", boy that's some lipstick on the pig.

9:44: There will be some public testimony on the Minnehaha Avenue reconstruction, despite the fact that there wasn't originally going to be any.

9:49: West Broadway transportation study is here. An engineer from the city is talking about the streetcar project. Streetcar vs. bus "alternatives analysis." Looks like they managed to find money for the study in some city and county couch cushions after the Feds nixed the program that would have funded the study. They're requesting authorization to look into the alternatives. I'm sure it'll be a very neutral study that won't emphasize streetcars at all... [Please read that last sentence using the sarcasm voice in your head.]

9:49: Some relatively benign compliments from CM Glidden (EG). Mostly people seem to be congratulating each other. Oops, looks like CM Quincy (JQ) has left the room! That means they can't approve it until he gets back. SCR is sure he's coming back, so no worries.

9:53: The engineer is killing time by talking about environmental assessments.

9:53: They're going to work with the Met Council to do an environmental assessment. "Pre-project engineering activities that have yet to be identified" sounds as vague as possible.

9:53: CM Kevin Reich (KR) gets on the board by asking for clarification on "specific services."

9:54: Looks like they're going to finally vote on the W. Broadway thing. Unanimous passage of the proposed study.

9:55: On to Minnehaha Avenue. SCR introduces the situation. She's going to keep the Minnehaha "actions" together.

9:55: SCR is going to postpone the action in the committee today, and lets everyone know it. Today is just for comments. Kicking the can just a bit, seems like.

9:56: "Nervous and tired" woman from the public giving testimony. She seems to be connected to the Longfellow Business Association. She is against the bumpouts, and "has talked to businesses." She doesn't like them because people jaywalk. Concerned about the pedestrians. She puts up a picture of the snow on the sidewalks of Lake Street.

9:59: She keeps saying she owns a shop on Minnehaha and 39th, but I am trying to look it up and can't find one. It's right by that blue East African coffee shop.

Q: Does anyone know what business she owns?

10:00: This is a bit tedious. I guess you get used to it if you're a city council member. They must have zen attitudes about this kind of thing.

10:00: CM Gary Schiff (GS) has entered the audience even though he is not on the committee.

10:01: SCR quote: "I think you have made the points that I've heard you make before." Woman is concerned about the bike lanes too. She's concerned, very concerned. Her voice betrays concern, low and persistent.

10:02: Concerned woman finally sits down. Now Hennepin Co. Public Works is going to give a presentation on the project.

10:03: The engineer has a lot more pep in his voice, which is a nice change of pace. Let it be known, Minnehaha Avenue is really "county road 3" or "48" or something. We have "dire need" for reconstruction.

Q: What are the odds that RL doesn't say anything during the whole meeting? I'd bet 20% chance.

10:05: "Enhancement to safety and mobility and accessibility and convenience for all users has to occur in a balanced fashion" is engineering speak for "nice street."

10:07: This engineer has a good Minnesota accent, especially when he says "cocoa and donuts." Bike advocates mentioned for the first time.

10:13: Today, the skewed intersections operate more like "free rights on a freeway entrance ramp," whatever that means. Someone's cell phone is ringing, the ringtone is "I'm Will Survive." SCR says "Just a little ABBA." Highlight of the meeting so far.

10:14: Now talking about stopping for pedestrians in a crosswalk, and how bumpouts allow that to happen because it increases visibility. Now he's criticizing the Lake Street bumpouts as having "abrupt tapers," and that they've learned their lesson from that. Apparently bumpouts need to have a "more gentle taper rate," something I didn't know before. Also, they should be "rightsized," which sounds like engineer speak for "whatever we want it to be."

10:15: SCR has a question about the bumpouts. Has the Minneapolis Fire Department (MFD) been consulted? Apparently they haven't talked to the MFD about bumpouts, and SCR says "that isn't comforting." She looks ominous, and tells the city staff to go over the layout. A second engineer approaches the podium with a thick binder.

10:21: Even though this is the most exciting TPW meeting of the year, it's still boring. They're going to move the curbs in 6" on each side to preserve the trees. They're going to "implement best practices" on bike lanes, and have a picture of a green lane on the slide. Engineer is explaining bike boxes now.

10:25: SCR says that bike boxes "would be unusual in Mpls, but is not the only time we have them." Bumpouts will shorten crossing distance from 48' to 24' in some places, which is a ton. SCR explains where Hennepin Avenue is to the engineer. How can anyone from Hennepin County not know this already? They're removing one of the two south-bound lanes at Lake Street, which is long overdue. "Widen the porkchop island" is best phrase of the day so far.

10:26: EG tapping loudly on her computer makes me feel better about doing the same in the back of the room. They're extending the left turn lane at 46th Street.

Q: Why are the windows in city council chambers yellow? Is it like rose-colored glasses? Is it "always sunny in Minneapolis"? (Alex's joke, there.)

10:27: Almost all the seats of the TPW committee are from the farthest out parts of Minneapolis for some reason. RL's ward is the closest to the center, and it's almost all south of Franklin. Now its time for questions. SCR talks about "hearing some frustration." Complains that "there wasn't much tweaking" of the cycletrack idea. (That's an understatement.) Says she was "asked to call that out." SCR wants to keep the option for turning the buffered bike lanes into a more protected bike lane in the future, but that's pretty impossible. That's the motivation for SCR's postponing the vote, apparently. Good for her!

10:34: SCR done complaining seems like. Now is reading aloud letter from neighbors about delaying the project until the feds have cycletracks in their design guidelines. Asking for federal timeline on bike designs, which is like asking for a weather report for 2 months from now. Apparently the Feds have a consultant for cycletrack design, but "it could take a number of years."

Re: fire trucks. Alex next to me asks, "What would be the problem with firetrucks on Minnehaha? Isn't that what those 12' shoulders are for?"

10:39: SCR is about to make a motion. She's really having fun up there. She moves postponement. No discussion. They postpone the vote for a fortnight. Hennepin Co engineers look a bit glum.

The takeaway of this meeting: Sandy Colvin Roy is upset with Hennepin County and wants them to come back with a better cycletrack proposal, or at least retain the option to re-do it in the future. She's even threatening a delay of the project for some possibly lengthy period of time if they don't do a better job with the cycletrack proposal. Sandy Colvin Roy is really "bringing it" in support of smart bike planning!

10:40: Not much more going to happen now? Storm report? Whatever.  I'm out. RL covers the spread! Thanks Minneapolis!

This sounds made-up - "Authorize increase to contract with Urban Works, Inc. by $50,000, for a revised contract total of $100,000, and extending the contract end date to April 30, 2014 for professional services related to the management of Special Service Districts"

Looking into that Urban Works contract would be much needed investigative journalism.

It is a scientific fact that sidewalk bumpouts hinder corridors of commerce.

If road bumpouts concern her so much the rest of the world must be terrifying.

Oh I think it's safe to say they talked about two streetcar projects - they just have to pretend to an AA so they can kill enough time that the city doesn't have to find money for it till they're out of office.

Also they have the county presentation on Minnehaha linked now:

It appears to show 2-stage left turn boxes rather than bike boxes, not that there's much of a difference between the two...

Bill, that was an amazing review!. Very fun and entertaining. I wonder if there is any chance of getting the protected bike lanes if approval is delayed until the new city council. Unlikely, but would be a huge victory after Hennepin County dug their heels in on this.

I appreciate the minute by minute analysis and snark. City Council members must have to undergo zen training indead!

The "nervous and tired" woman was Ella Ritzman of E's Emporium. An antique/second-hand store that I believe is open on one Saturday per month.