New at Streets.mn: Five Years Later, Nothing Learned from the 35W #BridgeFail 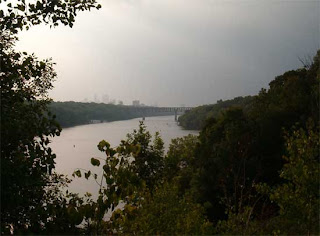 The 35W bridge collapse put a big jolt into this blog. I'd let it slip away, and not really been very excited about writing here until August 1st, 2007. Then I wrote a piece about the bridge, cities, and our everyday inter-dependency:

So much relies on so much steel, sand, and stone.

But of course we forget. People think when they slam shut their car door, flip on the A/C, and crank up KS95 that they're invulnerable. We think that our walls are solid, and that homes are ours and ours alone. We believe that bootstraps are the only things holding us up, but we forget that cars are just as reliant on public infrastructure as everything else, as trains or buses or electric sockets. In fact, this country has pumped trillions of dollars during the last 50 years into building a vast, vast network of highways, bridges, and concrete overpasses. We've spent more money on highways in this country than on any other public works project (unless you call the military budget a public work), but it's the kind of thing that's easy to forget about until something reminds us that somewhere, at some point, some guy under a fluorescent light designed everything we take for granted.

No, the real story today is that we've been reminded that we're all in this together.

The bridge collapse points to how little we change. If anything, our political system has become less flexible about transportation since 2007, less willing to shift away from the status quo. President Obama’s attempt to jump-start our national rail network was met fierce resistance. A host of new governors were elected demanding more freeways, and Scott Walker rather easily stymied any hope of a efficient rail connection between Minneapolis and Chicago. (You can find similar stories in Ohio, Florida, and New Jersey.) Anyone who imagines that our governments will raise gas taxes, re-calculate Federal spending formulas, or invest more in maintenance hasn’t been reading the newspaper.


In a way, I've been waiting for the another bridge to fall since 2007. The 35W bridge can't be the only one that's being neglected. There are far older bridges in far more neglectful states all over the country. But for whatever reason -- better inspections? -- there haven't been any other dramatic moments like the one five years ago. Instead, we get things like the New Orleans (#leveefail) or Duluth flooding (#sewerfail) or the Vermont flooding (ditto) or alarm bells over power plants. This recent NY Times article about infrastructure failures and climate change should raise your hackles.