Hot Cars, Yet Another Hidden Cost of Automobiles 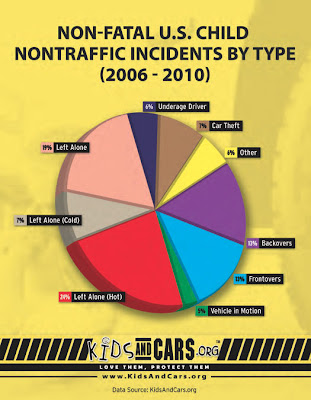 A friend of mine has been emailing folks about the weather and climate for years. He’s very good at it. Most every time a storm of flood or heat wave or cold snap rolls through the upper Midwest, he drafts an engaging, understandable explanation of the underlying climatic forces, compares different weather prediction models, or makes dubious predictions about the near future.

Plus, he’s funny. Here’s a recent bit of his work detailing a danger of heat waves:

Hot weather is bad enough, but accidentally killing your or child(ren) or pet(s) would pretty much sap the joy out of the rest of your life.  So, do not leave any living creature unattended in cars in the sunshine, even with the windows down.   Research has shown (and isn't it incredible that someone had to do research on this?) that cracking the windows 1.5 inches only very slightly delays the temperature increase and does not decrease the final internal temperature.  Do not try to outsmart the system by leaving the car running and the AC on; a whole bunch of happy toddlers were killed this way in 2006 when the car overheated, died, and the inside temperature rose to about 160 degrees.

Also, do not be misled into thinking this is a hot-weather phenomenon.  The deadly ingredient is sunshine, and not outside temperatures.  Even with temperatures in the 70s, a car in bright sunshine can easily get into the 120s.

The following protocol should be followed if you see innocent and/or helpless living things inside hot cars.  By the way, Minnesota and Wisconsin have no laws on the books for children, so you are sort of in vigilante mode.  But you want to be this kind of vigilante.

[The scene in Karate Kid where Mister Miyagi and Kreese team up to save two kids from being trapped in hot cars.]

I’d forgotten that it’s not uncommon for people to leave their children (and pets) in cars and kill them in this way. But yes, in America, this happens all the time. According to the intriguingly named nonprofit, Kids and Cars, the US average number of children baked inside automobiles each year is thirty-eight. (They also attempt to raise awareness about kids being run over by cars, backed over by cars, crushed by car windows, or locked in car trunks.)

Wow. It’s another unintended consequence of our automobile society. I’d imagine that most of these incidents occur because people drive everywhere, because the automobile has become such a part of our lives that we almost take them for granted. We forget that they're actually quite dangerous, and not just to the people being run down in the crosswalk. Just like guns, cars can easily harm the people using them.

How much of this is because of people leading busy, car-dependent lives? How much is a result of attempting to do too much with the automobile? I picture someone looking for a parking spot, getting frustrated, and leaving their car running with a kid inside while they do an errand. I picture an over-worked somebody multitasking while driving, running five errands and accidentally baking their children.

Well, let's imagine an alternative. One of the big differences between car culture and an urban street culture concerns private and public space. On sidewalks, streets, and buses you're out in public most of the time. On other hand, when you drive everywhere you're in inaccessible private space. In cars, people are pretty much left alone.

In streets, while you might see some pretty bad parenting, you don’t have people locking their children up and roasting them. It’s literally impossible to confine a creature in a hot space while walking (though those kid leashes do make one think). Nobody would leave their child or dog locked to a bicycle.

As I’ve been documenting for years, people can very easily tie up a dog on a parking meter or railing while they run a quick errand. On the sidewalk, there are plenty of eyes on the street, people that will watch you and make sure you don't accidentally roast your child like an eggplant. On a sidewalk, you’re in public space and a passerby feels somewhat responsible for things that happen there. A car in a parking lot, on the other hand, is a private space and a private situation. Intervening in that case to save the life of a child or dog requires vigilante heroism.