Three Great Things about the first ever Open Streets Minneapolis 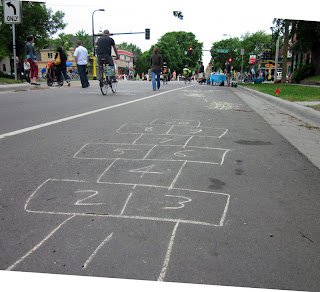 The first ever Open Streets Minneapolis was this weekend, along Lyndale Avenue from 10:00 until 2:00pm. And despite similarities to art fairs or bike tours or Grand Old Days, it also seems to me something quite new for the Twin Cities.

The idea behind Open Streets comes (rather surprisingly) from Bogota, Colombia, where the mayor created a day for cycling and exercise by removing cars from one street in the city. And as cycling and complete streets movements have spread, cities throughout the US have copied Bogota, from Portland to San Francisco to Tuscon and Missoula.

Finally, this last Sunday, after a lot of hard work and many meetings with city officials, Open Streets came to the Twin Cities. For me, it was like a dream come true. And here are three reasons why I enjoyed those four hours on Lyndale Avenue on Sunday... 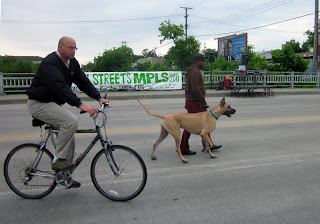 The idea behind Open Streets is deceptively simple. It's just the removal of cars from a street. There isn't any “point” to the event. It's not about art or music or food or a festival or a holiday. Nobody is telling you what to do!

Instead, people were allowed to enjoy the car-free street in any way they liked. And so you got a real diversity of folks using Lyndale Avenue on Sunday, from sidewalk lemonade stands to skateboarders to dog walkers to strolling shoppers to sidewalk cafe coffee drinkers. But most of all, you had many many different kinds and ages of folks on bicycles just going up and down the street enjoying a nice day.

There wasn't any requirement or theme or purpose, but just an open space, the simple removal of the normal street clogging traffic. The Open Street was simply an opportunity for something new. And it was up to each person to use the street's space in their own way. 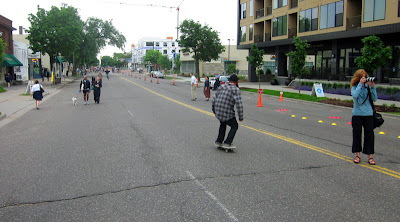 [A walker, two folks with a dog, a skateboarder and a photographer enjoying Lyndale Avenue in a new way.] 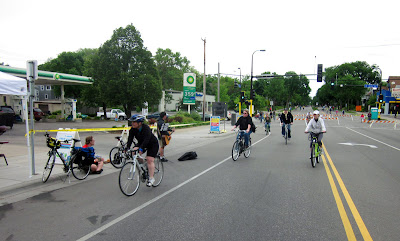 [A street musician and some cyclists on the South end of the avenue.] 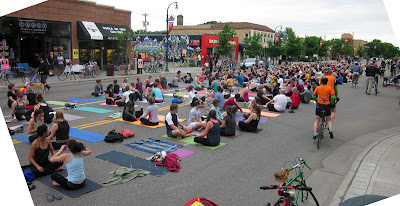 [Group yoga in the street was one of the more eye-catching events during the day.]
#2 Shows that bikes can be good for business 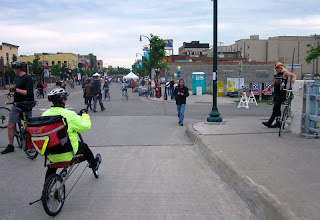 Anytime you try to add a bike lane or install a road diet, one of the bigger hurdles is often the business community, who have long assumed that the only way to get more business in the door is through increasing traffic on the street and improving access to parking spots. Connecting car traffic and revenues makes sense, after all. It's how our urban economies have been designed and built and have operated for 50 years, so that the top three concerns of most business owners are free parking, more parking, and easy access to parking. It means that any time you start talking about reducing traffic lanes or removing surface lots, you're fighting an uphill battle.

Well, during Open Streets everything is different. Lyndale Avenue was designed for crowded streetcars and strolling pedestrians, not for the auto age. I'm sure that most shops along the street were doing gangbuster business during Sunday, and what the Open Streets proved was that bicycles and traffic calming can be good for business too.* 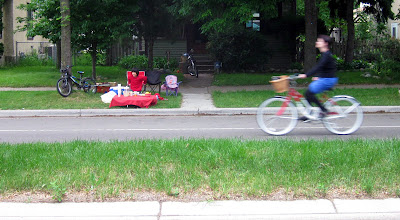 [A small entrepreneurial person operating one of the many lemonade stands up and down Lyndale Avenue on Sunday.] 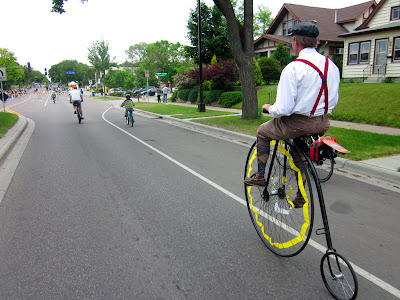 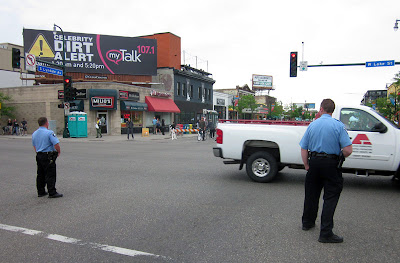 [One of the weirder experiences was biking up to a cop at a red light and having them wave you through the intersection with friendly courtesy, while halting a long line of impatient car drivers who had the green light. Completely surreal!]
#3 Changing bodies, not changing minds 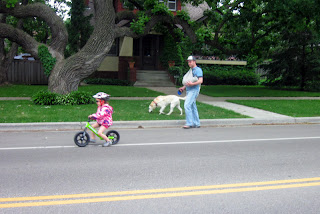 As anyone who has gotten involved in politics knows, changing someone's mind is an almost impossible task. You can argue with people for hours, explain to them all kinds of reasons for believing in this or that idea and still get nowhere. And, in a way, its even more difficult to change someone's mind about getting out of the car. Sure, people may “agree” with you about cars being unhealthy or expensive or whatever, but most people still grab their keys and head out to the garage. The car habit is deeply ingrained. You can change people's minds all you want about biking, but its completely different thing to grab a bike and head out onto busy city streets.

What I like about Open Streets was that instead of changing anyone's mind about the benefit and joy of cycling through the city, it focused on changing bodies. Instead of an argument about the environment or exercise, the event provided an experience of cycling through the city, of riding a bicycle not through a park or around a lake or along a river, but through the heart of a city surrounded by people and shops and houses and street life. It's a great pleasure! And for a few hours, anyone who wanted to, people of every age, could experience urban cycling without battling cars for breathing room. 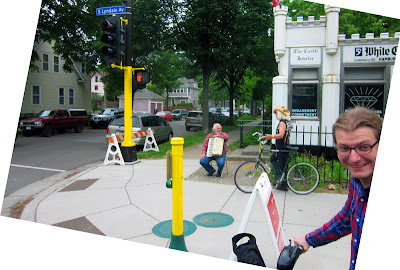 [An accordion player hangs out in front of an old White Castle.] 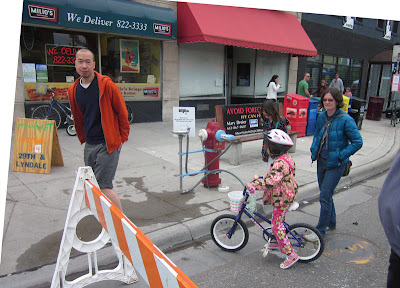 [The city rather cleverly transformed hydrants into drinking fountains for the event.] 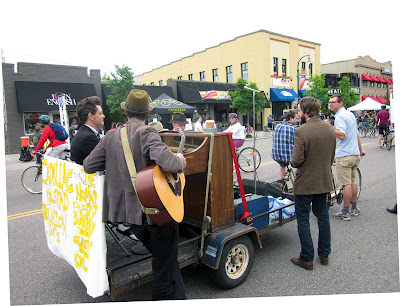 [Cadillac Kolstad brought his traveling boogie band to Lyndale, and meandered up and down the street providing rock to the masses.]
The real legacy of Open Streets is that, at least for me, Lyndale Avenue will never be the same again. When the clock struck 2:00pm and Lyndale Avenue turned back into a pumpkin, I couldn't help but retain this memory of what it had been like to cruise up and down in quiet comfort through the middle of the city. Streets are the most common kind of public space we have in our cities, but they've become almost synonymous with ever-proliferating cars, all fighting for parking spaces and changing lanes and speeding to get to the freeway onramp a few seconds faster, constantly, every day.

Open Streets began to prove that cars and streets are not synonymous, that there exist many different ways of using the streets that we share. Events like this Sunday, and hopefully many Sundays to come, prove that another street is possible. It gave us a taste of a different future, another Lyndale Avenue, another possibility for how our city could look and feel and flow. And to me it was mind-openingly beautiful. 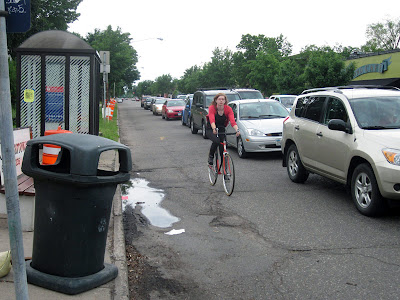 [Back to "normal" on Lyndale Avenue, choking on exhaust and riding in the pothole'd gutter.]

* At one point I went over and chatted with the attendant who was “working” in the parking lot across from the French Meadow Cafe. His job was to make sure that people could find and access the large surface parking lot on the corner of Lyndale and 26th, a spot that used to house that large yellow hardware store. Well, in all my years of wandering this earth, I've never found a young man so visibly bored. The parking lot was pretty much empty, but French Meadow was very much full.
Posted by Bill Lindeke at 7:38 AM

Thanks for a great post on the event! I particularly like #3 Changing bodies, not changing minds. Community building and social change really is based on showing people what's possible and then letting them decide for themselves what kind of future they want to live in.

Open Streets sounds like it was a great success, and I'm sad I couldn't make it. But I've enjoyed looking at photos, reading accounts like yours, and looking forward to the next one.

I feel it's necessary, however, to pass along one story about some police directing traffic who were not friendly or courteous, perhaps as a result of confusion, stress, or just resentment. This comes from Minneapolis Bike Love's forum discussion of the event:

31st/Lyndale: I rode through this intersection 6 or so times. Only two times was I clearly waved through by both of the officers (they were not following the lights for some reason and felt the need to confuse both drivers and bikers) and treated with respect. I was riding south, the officer closest to me waved us through, but we didn't notice that the officer right next to him was telling cars to come through the intersection ... there was a NEAR COLLISION. The cop screamed at us, blaming the biker that almost got creamed, and when a cyclist told her she was not doing her job, she told us "YOU NEED TO GET OFF THE FUCKING ROAD!" In another pass through that intersection I was really cautious because the cop had been erratic in how she was directing traffic and I didn't want to blindly cross on red. She looked at me and said, "MY ARM IS GETTING TIRED, HERE!!! COME ON!!"

I don't mean to rain on the Open Streets parade by highlighting what I hope is an isolated incident, but it might point at some issues that need work before the next Open Streets, or just in general, since we can always be doing more to increase understanding and communication between citizens and police.

Oh my god, there's a lot of effective material in this post!