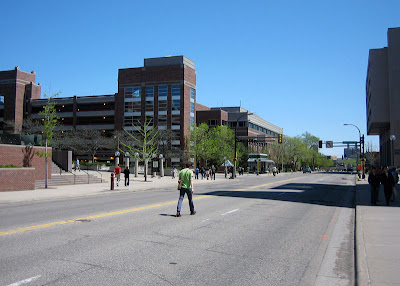 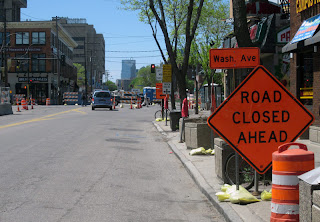 Its been 40 years since anyone has had the experience I've been enjoying this month. The last time anyone's been able to stroll through campus down a car-free Washington Avenue was during the 1970s when students protesting the Vietnam War shut down the street for a few days. And needless to say, there were probably a lot of other distracting things happening during that time.

Granted, there is a lot of construction disruption, but when the jackhammers aren't working, the experience of being on campus at the University of Minnesota in a car-free environment can be very peaceful. I was biking down the Northrup Mall the other day at night, and the place was quiet, peaceful, tranquil. The vast green space between the student union and the big theater almost had a mystery to it, almost as if this mall space was meant to be a stately park and not a patch of grass next to a limited access four-lane freeway. 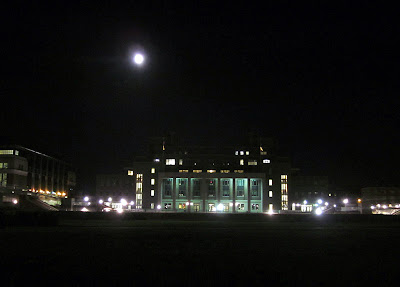 [The moon rising over the dark and quiet still of Northrup Mall.] 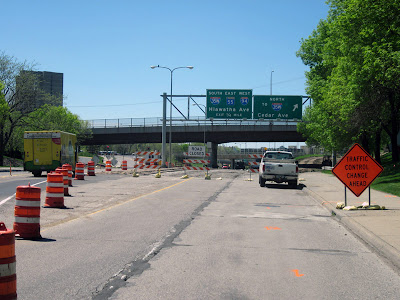 ["Traffic control change ahead" is putting it mildly."]

[Students enjoying the large green plaza at the corner of Washington Avenue and Oak Street without the constant noisy din of traffic noise.]
It took a billion dollar project, a costly legal battle, and the combined interests of the state and federal government to finally undo the bad decision to turn Washington Avenue into a high-speed freeway. And finally last month, light rail construction began on campus by permanently shutting down the west 2/3 of Washington Avenue through campus to all passenger cars. In the future, the street will become a transit-only street a bit similar to Nicollet Mall, with trains and buses running down it, through campus, and over the bridge towards downtown Minneapolis. At the very least, this will increase air quality and noise pollution through campus. And depending on how the final design plays out, this will very likely create an improved pedestrian environment for students and University employees who rely on Washington Avenue every day as a commercial corridor.

[What the pedestrian mall is supposed to look like in the future, after semi-transparent trees grow.]
While the current construction mess is messy, and while I can't even begin to imagine what the heavy loads of bus transportation through campus are going to be like during the interim, the long-term future of transit on campus is very bright. And in the meantime, its very strange to see what used to be a large freeway turned into a big pile of dirt. 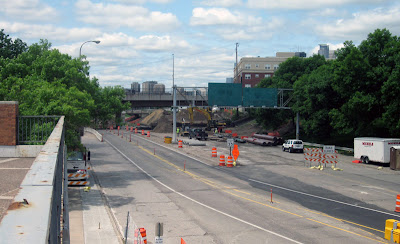 [The dirt pile where the freeway used to be near the "corner" of Cedar Avenue and Washington Avenue.] 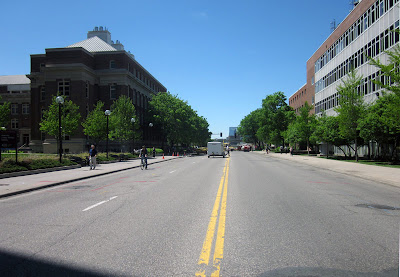 [Students biking down Washington Avenue without fear of being smashed into bits by a large truck.]
Posted by Bill Lindeke at 12:14 PM