Sidewalk of the Week: Mainstreet

[Sidewalks along the main street of Hopkins, Minnesota, its most historic suburb.]
It's no secret that I'm not a huge fan of suburbs. They tend to be monotonous places filled with single-family lawn-moat garage-homes with no sidewalks and no downtowns and no history, places that segregate society and have little public space and are devoted to the automobile and its big box parking lots.

But... But, there is an exception to every rule. And if I was forced at gunpoint to pick one Twin Cities' suburb to live in, I'd choose Hopkins, a town that is decidedly not like the rest of them.

That's because Hopkins does have a past. Like many of our suburbs, Hopkins began as a 19th century small farm towns at the edge of the cities, but unlike most of those towns, Hopkins began to grow like gangbusters when streetcar magnate Thomas Lowry built a streetcar line out to Excelsior, ending at his company-owned amusement park on Lake Minnetonka. The streetcar line ran right through Hopkins, and so downtown Hopkins was born: a main street with actual sidewalks and old homes built around a tractor factory that existed way back in 1905. And today, while you might think that Hopkins is just another Minneapolis suburb, no different from [insert natural sounding adjective + natural sounding landscape feature], it really truly is different. As Gertrude Stein might say, there is there there. 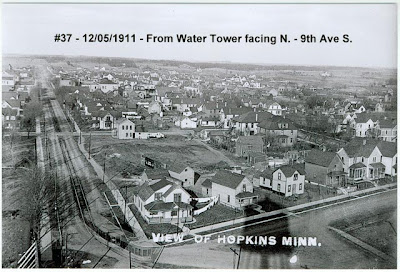 [Hopkins from above in 1911. Note ghostly presence of streetcar in left foreground. Img. MNHS.] 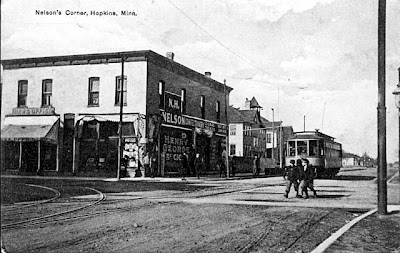 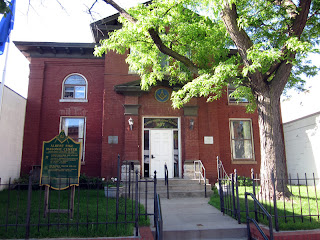 [The old Masons' Lodge on Mainstreet.]
Downtown Hopkins has a mainstreet called Mainstreet (all one word, used to be called Excelsior Avenue) that is actually quite nice. It feels intimate and not too wide, and is lined with two-story mixed-use buildings set up right against the street with real shop windows and doors abutting the sidewalk and street trees and buildings made from real bricks.

There are at least half a dozen different reasonable facsimiles of sidewalk cafes and they seem to have customers. There's even a large new condo building on the Eastern end of the street, no doubt a five-year-old remnant of the housing bubble. But unlike many of the new urbanist developments in suburbs elsewhere (e.g. St. Louis Park, Burnsville), this one fits really nicely into the already-existing downtown street grid. The city has also done a nice job with the brick streetscape, and invested in an arts school and a movie theater and community center. 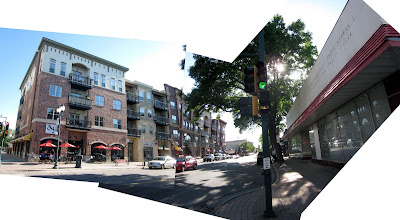 [The new condo building on the East end of Mainstreet witha sidewalk cafe on the corner.]

[The West end of Mainstreet, bracketed by a busy burger joint, a movie theater, and the arts high school.] 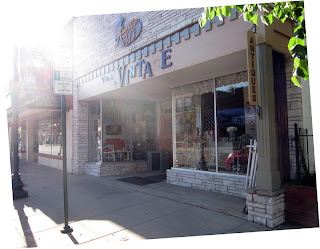 [One of the many antique stores that line Mainstreet.]
Despite the street life, Hopkins' Mainstreet main street is not exactly a thriving economic landscape. Like most of the Twin Cities, I'm sure that the vast majority of the retail activity in Hopkins takes place on a big-box strip out on a freeways, and what's left for downtown Hopkins is a smattering of antique stores, a hair salon, a tattoo parlor, a barely open vintage/thrift shop, a half-closed history museum, a liquor store, and a whole lot of empty storefronts. But, to my mind, that's not bad for a landscape where nearly everybody drives all of the time. Most small town main streets in the US have been pretty much abandoned in the Wal-Mart era, and the fact that downtown Hopkins can hang in there for this long is impressive.

In a way, historical Hopkins makes visible the paradox of trying to re-invent suburbs in the automobile age. Most people in Hopkins drive to get where they're going. And it poses the question: who would drive to the downtown Hopkins theater when a giant mall megaplex is more convenient? Who would drive to eat at a main street Mainstreet restaurant when parking is easier at a chain restaurant on the freeway? Who would go shopping in downtown Hopkins when Target is close by? 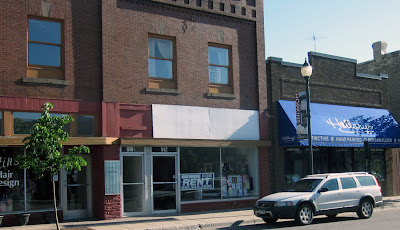 [An empty storefront on Mainstreet Hopkins.]
If Hopkins is having this much trouble getting vitality on its downtown street, even though they've been blessed with all these beautiful buildings and history, where does that leave other newer suburbs that don't have these amenities as they try to reinvent themselves and create downtown areas from scratch? Is this a lost cause?

One possible solution may be the bicycle. I couldn't help but notice all the bikes parked along the main street. Hopkins is also at the crossroads of four popular bike trails, and I'd imagine it receives a lot of traffic from cyclists passing through from the city. Maybe downtown Hopkins can become a bicycle town, at least in the summer. At any rate, next time you're driving or biking along through the Southwest suburbs, get off the road and head down to Mainstreet Hopkins to see a wonderful slice of what towns used to look like a hundred years ago. 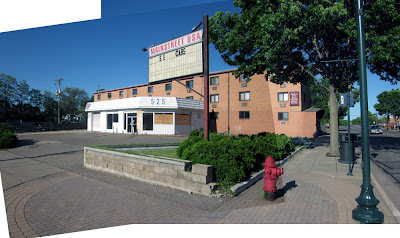 [An abandoned service station on Mainstreet Hopkins.]
Posted by Bill Lindeke at 12:39 PM

This will not succeed in reality, that is what I think.

Here, I do not really consider it will work.

Awesome I didn't know the past behind Hopkins it has been interesting for me, specially because I could see that it has sidewalks totally different ti the rest of the suburbs, also I can see that the sidewalk is wider than I thought it was.

Hey, there is really much worthwhile material in this post!

Thanks so much for this post, quite effective info.