Amy Klobuchar last week provided one of the more nauseating moments in recent Minnesota politics when she came out in support of Michele Bachmann's (R-Batshit) sprawling bridge to nowhere proposal in exurban western Wisconsin. Klobuchar's support means that almost the entire Minnesota congressional delegation is on record in support of breaking environmental protection rules for an unnecessary 700+ Million Dollar sprawl-inducing freeway bridge through the Federally protected St. Croix river valley.

Hearing the news, my initial reaction was to write a lengthy screed about how unnecessary and wasteful the bridge proposal is, how building a huge exurban freeway bridge after the housing bubble is like making a huge investment in Napster after the dot-com bubble. We need a huge freeway bridge out connecting Oak Park Heights to nowhere, WI about as much as North Minneapolis needs another tornado, about as much as the Minnesota Twins need another scrappy utility infielder, about as much as northern New Jersey needs another mall... But I don't need to write a screed, because there's already a terrific screed out there explaining all this about the current bridge proposal.

Instead, I thought I'd take this opportunity to compare Bachmann's and Palin's bridges to nowhere to see which of them is more useless... 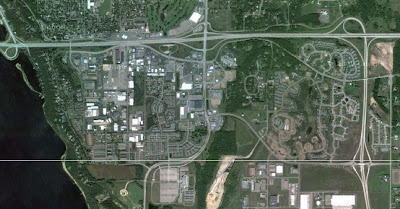 [The sprawl development in Hudson, WI, which is what the empty farmland across from Stillwater will theoretically look like in 20 years if the huge bridge is built.]

It is not as though other options don’t exist. In fact, there are numerous options available to resolve the maintenance and traffic capacity needs of the aging lift bridge. Several options would not only improve traffic flow across state lines but would do so in a manner that complies with the federal protections. Alternative designs and locations have been proposed to reduce the scope and scale of the proposed bridge. These alternatives recognize the context of the Stillwater and Oak Park Heights communities as well as the scenic beauty of the riverway. A smaller scale bridge reduces the cost to both MN and WI taxpayers while still providing area residents with a convenient crossing.

Good Strib article on the cost and old-fashioned auto-dependency of this bridge plan today.

The proposed St. Croix Crossing bridge at Oak Park Heights is "an old-school suburban highway" out of step with modern needs, said John Bailey, a policy director of the transit group Envision Minnesota. "I think what we're seeing from many proponents of the St. Croix Crossing is a solution for the 1960s, where the Gateway Corridor is really a 21st-century solution for transit."

Wow... The MN delegation, eh? So what they really want is more residential development in the hinterlands? Or maybe they just want construction dollars from the feds so that we can keep our residents busier working on unnecessary projects. Either way, it's a losing proposition.

Everyone but Ellison and McCollum.

You hit the nail on the head here Bill. Thanks for laying this out.

I invite you all to join MPR's online debate at http://insight.mprnews.org/

What exactly you're writing is a horrible mistake.

Very effective material, lots of thanks for this article.

Indeed it is a great analysis.

Quite helpful piece of writing, thank you for this article.