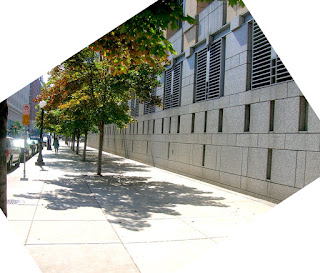 Blank walls are tough to fight because no one is for them. There are no civic debates whether to have them or not. There is often no recognition that they have become a problem at all. Their growth is too incremental. They are the by-product of other causes, many seemingly good – separation of vehicular and pedestrian traffic, off-street circulation, and such. Given current momentums, the blank walls will continue to spread, even in the most exemplary of cities.

Such as Saint Paul, Minnesota. It is the blank-wall capital of the United States. You would not expect it to be. It is a most habitable, attractive, and friendly city; it has one of the most resourceful and effective mayors in the country; its Lowertown redevelopment is of an eminently human scale and has a fine street presence. St. Paul also has one of the most complete skyway systems in the country, and it is probably the best designed of all of them.

It is paying a steep price. In a striking example of the Gresham effect, skyway level has led to the blanking-out of the street level. The result is as drastic as if shop fronts and windows had been decreed illegal. There are few to see. The experience is so dull that to walk at street level is to do penance for not using upper level. Block after block is a blank wall. Occasionally, there is a break to indicate what might have been—like the trompe l'oeil windows on the wall of a parking lot.

It is not entirely farfetched to prophesy that one day St. Paul might embark on a rediscovery project to uncover its buried street level. Atlanta made a tourist attraction of its old underground streets; so did Seattle of its Skid Row. But prime shopping streets are a much greater treasure, and the fact that they have been concealed should make their reappearance all the more dramatic. Disneyland merchandises a simulation of a street. But cities have something even better: actual streets. Right under their noses.

Thanks so much for this article, quite useful piece of writing.