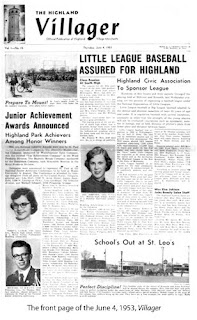 [Basically the problem is that the best source of Saint Paul streets & sidewalks news is the Highland Villager, a very fine and historical newspaper. This wouldn't be a problem, except that its not available online. You basically have to live in or frequent Saint Paul to read it. That's why I'm reading the Highland Villager so that you don't have to. Until this newspaper goes online, sidewalk information must be set free.]
Total # of articles about sidewalks: 12
Total # of articles about sidewalks written by Jane McClure: 11

Short short version: [I wish I could have seen it when] A coalition of business owners "crowded into the Ax-Man Surplus Store" to desperately ask for help from the city and/or state to make up for revenue that will be lost during construction of the LRT line along University Avenue. [Only problem being that nobody has any money these days. -Ed.] Metaphors employed by business owners include "blood on the streets" and "swimming in an ocean with little life jackets." Business owners are looking for about $45M, but only $1.5M is on hand so far for construction mitigation.

Short short version: Report on the ["controversial"] median on Snelling Avenue. [Much to the surprise of reactionary Ward 3 Council Member Pat Harris, ] "Businesses are not seeing any decrease in customer traffic." Includes quotes from a Macalester official who observed slowing of traffic on the busy street. Also includes info about who maintains [i.e. waters & weeds] the plants on landscaped medians. Apparently in some places, this is done by volunteers! [Sounds like an opportunity for TC Sidewalks. -Ed.]

Short short version: A 1894 livery stable on Ramsey Hill is going to be renovated and historically preserved by being converted into a house. Article includes some interesting info about the history of livery stables. Somehow, carriages were stored in the ceiling.

Short short version: Another update on the ongoing negotiation over sidewalk cafes in the Capitol City. Breaking news: "No one testified at the third public hearing on the ordinance on January 5." The debate is over whether to have minimum widths at 36 or 48 inches.

Short short version: Report on the upcoming big meeting on the "controversial" test median for the bike boulevard on Jefferson Avenue. Includes typical McLure-ian language such as "so-called Jefferson Avenue Bike boulevard." [Please show up! Monday the 24th at 7:00 PM at the Edgecumbe Rec Center.]

Short short version: Report on a candidate to replace [car-loving] Ward 3 Council Member Pat Harris, who is retiring. This candidate is a real estate developer and building owner who has lived in Highland Park for 33 years. Mannillo is also the former chair of the St Paul Heritage Preservation Commission. [$10 says he doesn't touch the bike boulevard issue with a 10-foot pole. -Ed.]

Short short version: MNDOT is repaving ramps along the freeway and installing a noise wall between Pelham and Cretin.

Short short version: über-alarmist op-ed about how "neighborhoods will be destroyed" by the upcoming light rail train. Barnaby's concerns: street parking becoming difficult, the "spectre" of high-rises plaguing South Minneapolis, the sound of the train "alarms," and "alley traffic." The author cites the terrible image of Marshall Avenue after its conversion to a two-lane street as a warning to the disbelievers. [Truly, Marshall today is a nightmare!] The icing on the cake? The gov't will use eminent domain to steal your house to give land to a developer. [Wow! Even for the Highland Villager, this one is a mega-doozy. I'm tempted to re-print the thing in its entirety. -Ed.]


Headline: Culver's looks to bring butter burgers to University Avenue; Project would be one of the first under interim zoning rules created for Central Corridor
Reporter: Jane McClure

Short short version: Great. [Sarcastic tone.] They're opening a Culver's near University and Pascal, where the Spin Cycle laundromat is currently. It looks like they want a drive-thru window, but need a conditional use permit for that.
Posted by Bill Lindeke at 3:38 PM

Please reprint the batshit op-ed! For the best newspaper in the twin cities, the Villager has the worst editorials (I hope you didn't see Phil Krinkie's lie-stuffed essay in early December).

I'm planning to post soon about the crisis of the 16 line - imagine the heads rolling if there was stop-and-go traffic on I-94 on Sunday nights - and would love some grist for my mill.

So, I do not really consider it may have effect.