Notes from the Empire Builder 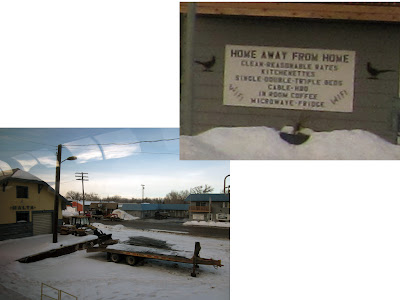 [The train station in Malta, Montana, with detail of sign on nearby hotel.]
I’m listening to the acoustic salad spinner that is the Amtrak waiting room in Saint Paul. I know right away that I’m in a different America. If you or I ever get the feeling that the USA has become a homogeneous wasteland, a capital of conformity, a place inhabited by televised mall-zombies line dancing their way to their Capital One credit limit, we need only get an Amtrak ticket. This place has all the eclectic David Lynch charm of a 70s documentary, something like Errol Morris’ Gates of Heaven. Yes, Virginia, curious documentary people are still alive and well and they’re here in this beige building waiting for the Empire Builder. The 20-year-old dude in full cowboy get-up strolling past a pair of obese Indian women in hoodies catches my eye immediately. It’s not just the hat, the boots, and the jeans hitched up to a big belt buckle, but he moves with that particular cowboy gait, like a pendulum on a grandfather clock. It’s not something you see in Saint Paul, and never for someone so young.

A family of four sits down near me and their entire family drama writes itself so plainly on their faces that I can’t resist, and I daydream the inner monologues of the mother in the North Dakota sweatshirt wearing too much makeup... The older blonder prettier daughter is wearing, for some reason, a navy blue bathrobe, gray sweatpants, and what seem to be slippers and is attached like a barnacle to her mother’s fondling arm. Meanwhile, the younger jet-black hair daughter is dressed to the nines with high heels and a skirt far too revealing for her age and she’s bored and desperate to prove her independence and compete with her doted on sister. The tall skinny brother hates the entire scene and plays with his cell phone the whole time, wandering off to be bored elsewhere in the station with high-heel sister tagging along while mom and blondie hug each other. They all have these pursed lips which must run in the family, the kind of lips where it seems like you’re frowning even when you’re not.

The train is late, and I move to another point in the station to be closer to the door when the inevitable beeline forms. It doesn’t get any less odd. Almost immediately there’s this young dude with Justin Bieber hair who is wearing, I kid you not, an entire two-piece suit made out of red and white plaid, and leaning against a trash bin and reading a pink copy of Zen and the Art of Motorcycle Maintenance. The part the boggles my mind is that he doesn’t look like a hipster. I cannot tell whether or not he’s being ironic, which, given the literal clowniness of his outfit, is an almost impossible trick to pull off.

I end up sitting near two African guys, one of whom talks straight nonstop for a half hour, a long monologue about making money in the US that seems to revolve around the difference between Ethiopian and Somali Africans and others.

Later, on the train. “To tell you the truth, I’m ready to go to our savior,” says a 50 yr old man who intentionally sat down at the table of this 40 year old woman, a Montana schoolteacher, and very quickly began telling her his life story in the lounge car. “It’s not a coincidence that we found each other,” he says sometime later. Also he believes that cell phones and video games are a conspiracy to undermine interpersonal relations, “kids today” and whatnot. He wears matching wrist braces, the kind for people with carpal tunnel syndrome. “First you take away person to person communication… then [implied apocalypse].” “You know what, everybody’s got nukes now.” He recently owned a Rottweiler that was assigned to him as a psychiatric services dog, but she died.

This guy proves to be a recurring character on the trip, and I end up sitting next to him again when he has this conversation with a retired military farm type guy from Minnesota about eschatology and pre-Socratic (!) philosophy, and it turns out the guy believes in re-incarnation and the eternal return and describes how quantum theory proves that there was no beginning and no end to time. It is then that I am thankful to have remembered my iPod.

The train through Montana has lots of hunters, and they are always looking out the window, looking only for things they can shoot. The list includes elk, deer, cayotes, rabbits, and there emerges over time a story about a hunting priest who illegally shot a “mulie” but got away with it because of his connections upstairs. Of course, at least they know how to spot a coyote along the fence row at 300 yards or whatever. Very small and hard to see!

There is a strong smelling Amish family who apparently let one daughter escape to the first story of the train in tears, much to the displeasure of the Amtrak conductor.

I just saw a big feedlot in Eastern Montana. I’ve read about that in books.

I’m headed to Portland, Oregon, and there are people talking about Portland on the train. Among them is a super hipster “filmmaker” from New York / Portland / other places, a college kid from UW Stout who was moving to Portland for a few months, and two kids from upstate NY each wearing red plaid who love living in Seattle. Overheard: “A friend of mine told me that Portland is kind of racist. He was asked to leave a party, people said ‘you don’t belong here.’” Of the two plaid wearing dudes from upstate NY who moved to Seattle, one of whom is studying to become teacher, and the other one is unemployed and seems like a very intriguing guy to me. Now the filmophile hipster is talking about how Portland is the most racist place in America. He tells a story about a cop who shot a black kid and didn’t receive any consequential punishment (as if that never happens anywhere else). He says: “It’s a silly place. I hope it gets nuked.”

One of the funny things about Amish / Mennonite people on the Amtrak is that, in this context, they actually don’t dress all that funnily. Right now I see the fairly modern-seeming Amish / Mennonite father look back and do a double take when he sees another man with a bowl cut and a beard and a blue button up shirt with the top button fastened and a pair of suspenders walk down the aisle. Only its not another member of the tribe, but rather, this is what people from North Dakota look like.

I meet a 58-year-old man with stumpy fingers named Bob who is a portrait artist from the lake district of Northeast Indiana. He learned to play the cello seven years ago when he bartered a portrait with a friend of his who’d bought a cello and three years of cello lessons in a package deal, and now he plays in some sort of orchestra in Indiana, where they recently played with “the most famous pianist in the world, A Chinese named Wang.” He sang to me a few measures of the Spanish Dances, which he was cello-less-ly working on with his hands, ghost like. He “used to rodeo.”

Later the next morning he and I are sitting around the lounge with another crusty NRA dude missing a tooth who lives on a mountainside in Washington State who ends up saying, “You’re not a’rabbit huntin’ ‘til you caught ‘em by hand, boy I’ll tell ya.’”

Old people on the train seem to believe in Revelation, Mayan eschatology, the possibility of alien life, but are skeptical about global warming.

Topics from another Empire Builder conversation, this time between three twenty-something dudes and one chick, one 0f whom is reading Dostoevsky, include: astrology, faith, intoleration, the amount of time light from the stars takes to reach Earth, the indie rock scene in Buffalo. Later I end up chatting with these folks and two of the guys, including Dostoevsky, borrow my computer to listen raptly really death-like metal music. We do this for a hour. My dreams on the train are f’d regardless.

I have my laptop in the lounge car and a gigantic man in his late 40s with a shaved head and things attached to his leather belt stops and rather sheepishly says “computers… say, do you know about those things? Can I get my email on any computer?” and we talk for a while about the internet and its many possibilities and I learn that he has a boat somewhere. I easily imagine him successfully escaping the attachments of the world. I’m a bit jealous.

The world speeds slowly past my window and I rock back and forth without thinking. 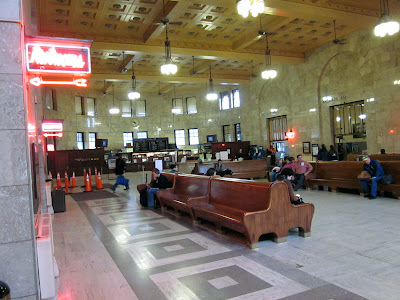 [Inside the train station in Portland, Oregon.]
Posted by Bill Lindeke at 9:06 PM

Love this. So true. We threw an impromptu 50th birthday dance party for a woman named Patty (or something like that) on the empire builder...Anything can happen.And the one truth about Amtrak is that there is always Metal and Amish folk.
-kate

Oh my god, there's so much worthwhile information here!

In my opinion every person ought to browse on it.

I found a lot of helpful info here!