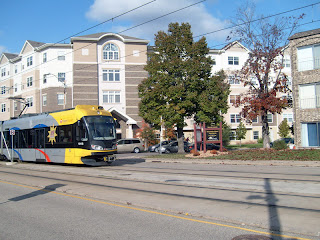 [By popular demand, here is the latest Op-Ed from the Highland Villager. Image of the sun-blotting Olin Crossing High-Rise Housing Project, taken from Fred's website.]


Sounding the alarm for light rail in St. Paul

If the Central Corridor line is built, you will not be able to park in front of your house, or behind your house if you share an alley with one of the high-rises that will be built along University Avenue. On my block, I have witnessed as many as 23 parked cars at at time that did not belong to any resident of the block. This winder due to the snow, Minneapolis declared a permanent ban on even-sided parking. This reduces the number of available parking spaces on my block to less than 23, which means I have to park on another block.

When developers -- like those from Metro Plains, which built Vantage Flats -- tell you that parking from their new high-rises will not be a problem for you, they will be lying. The residents of the new high-rises and their guests will park along your street. Fans of the Twins and Vikings will use your street as free parking lots and as garbage cans and ashtrays. Your streets will become the long-term parking lots of those traveling by train to either downtown.

High-rises are not a spectre here in Minneapolis; they are a reality. Come and see Vantage Flats, Minnehaha Place and Olin Crossing along Minnehaha Avenue between 52nd and 54th streets. Because of the shadows they cast, the snow takes longer to melt, so in the winter you have longer to deal with the problem of trying to turn into your garage from the frozen ruts in the alley. In the summer, your backyard gardens will suffer from a lack of direct sunlight.

In the summer, you will never be able to have your windows open. Crossing alarms for the train will sound at every street crossing, and even though the Metropolitan Council will tell you these alarms will be "aimed" only along the road, the aimable alarms will only be installed downtown, so that in the neighborhoods you will be able to hear the alarms from four blocks away.

These alarms will sound 24 hours a day. The Met Council will tell you that the trains will not run between 2:00 and 4:00 a.m., but the trains start at both ends of the line, so they will need to travel the route from the garage to downtown every morning. These alarms will sound more than 20 times an hour during rush hour. Because these alarms are specifically designed to be warnings, you will never get used to them.

At the light-rail stations, there will be several other alarms. The alarm for when the train is approaching also sounds the entire time the train is stopped at a station. The trains themselves have two alarms and, in true Minnesota-nice fashion, they like to sound the louder one as they pass a half block from your home.

You worry about alley traffic. Yes, there will be alley traffic. The high-rise construction crews will park their trucks in the alley during morning rush hour even though it is illegal to do so. They will also block University Avenue while they clean their trucks out even though it is illegal to do so. But more important, and more distressing to you, will be the fact that every street that parallels University Avenue will become a secondary circulation route, because University itself will become a nightmare to drive along. Traffic will become so difficult to manage on University that drivers will seek other routes.

The disruption of traffic will extend south of I-94. As there are a limited number of streets that cross the freeway, traffic on these streets will back up for blocks because of the trains, especially when a second train causes a stoplight override to begin even though a previous stoplight override has just ended.

Remember what driving along Marshall Avenue was like when it had four lanes of traffic? Now it has two lanes of traffic with a left-turn lane that has no left-turn signals, which effectively prevents drivers from turning left. That is what University will be like if the light-rail line is built there. After the trains have been running a while and traffic problems have become horrendous, the city will spend a quarter million of your tax dollars to fund a study to determine why these problems exist.

Finally, you will have to live with the fear that your homes will be taken by eminent domain so that your city can give the land to a developer even though this is illegal under Minnesota law. (This is what is happening on my block. The state took homes from my block to build a highway. When the highway was built somewhere else, the state gave the land to the city of Minneapolis, and the city now plans to give it to a developer to build a high-rise.) Before the city does this, it will make you pay for another study that will show you what your neighborhood will look like after it has been "revitalized."

You may think that I paint a dim picture. I have personally witnessed every problem I have told you about. And I am only one resident. Multiply my stories by the number of residents along the Hiawatha light-rail line and you will have an accurate assessment of what life will be like for you if the Central Corridor is built.

WOW! Mr. Weisner hates everything! This guy is seriously cranky.

Hah! Well, I'll probably poke a stick at this more later -- but first off, I'm only aware of two gated (and "alarmed") crossings planned along the entire Central Corridor route -- the existing ones by the Metrodome on Norm McGrew Place and 11th Avenue South.

He is only cranky because his spleen is overproducing due to the changes in his body in the course of his devolution into a mole-man, which really would happen to anyone shrouded from the sun by those accursed high-rises.

I'm pretty amazed that he brought up eminent domain acquisitions along Hiawatha Avenue, which happened over the course of at least three decades. I don't know about his specific block, but there are cases where Mn/DOT paid hefty sums in those transactions. The feds put $13.3 million into one pot which acquired 41 pieces of land -- that's an average payment of $325,000.

My concerns about parking along University are near zero. Yes, they're going to take away 975 spaces along the road, but there will still be 16,000 on- and off-street spaces within one block of University after the line is put in.

I am sympathetic to the guy's concerns about noise, since I'm very noise-sensitive myself. I've thought about living in places near the Hiawatha LRT, but couldn't justify it since I knew it would keep me awake. Fortunately, most of the noisy stuff will be absent from the Central Corridor line. Besides, University Avenue is pretty noisy already, with a high volume of diesel trucks and semis. The Central Corridor trains aren't going to be silent, but they won't be anything like what he's experienced.

Great points, Mulad. I recently came across some documents indicating that the property acquisitions for the Hiawatha freeway were complete by the 1960s.

Clearly the Mole-Man would be mad no matter what was built there - certainly the Hiawatha Freeway, which most likely would have required an elevated interchange at Minnehaha, would have exercised his spleen as much as light rail. But my feeling is that they could have built an underground Buddhist meditation center and he would have complained about the increase in serenity.

thing is, Weisner isn't wrong about everything. his points about traffic flow and parking are probably accurate. only in my opinion, most of those things are good for the neighborhood, and he's a hyperventilating foamer.

having calm and safe traffic patterns, lots of people on the streets, density, things to do, places to walk, in your neighborhood... having choice about how to move around the city, being able to choose not to drive if you don't want to or don't have to, being able to choose to walk or take the train if you desire... this all sounds pretty good to me.

its not like anyone is taking away Weisner's car, either. i bet its still doable to park and drive around his 'hood, only he might have to walk an extra block or drive 5-10 mph slower.

that seems like a pretty good trade off to me, as long as you're not a crazy person.

Onstreet parking always gets cramped when you add higher density housing. Ever tried to find an onstreet spot in Cedar-Riverside?

And the noise complaint is bogus. I live 2 blocks from the 38th St station and I rarely hear anything from the train. And even then it's nothing compared to all the noise from the cars/firetrucks/police/ambulances blasting back and forth on 38th St.

If it's such a pain in Mr. Weisner's side then he should move somewhere quieter. There's no shortage of folks buying houses in well-connected transit areas like his.

Mr. Wiesner points out several of the most common arguments against light rail lines, which are real concerns to neighborhoods considering the addition of a LRT line. Addressing and minimizing these issues will help LRT to be accepted and hopefully continue to be expanded in the Twin Cities. LRT benefits many and hurts few, but the proper response to people adversely affected by LRT is not "suck it up, everyone else's happiness is worth your pain".
I live on the south side of Sherburne Ave and share an alley with a derelict University Ave auto dealership. I'm excited about the prospect of LRT-induced redevelopment of University Ave, but I certainly don't want my street to turn into a parking lot/garbage can for sports fans. I think most people would consider that a poor trade-off, especially for people who live next to the line but never use it. Luckily the three blocks of Sherburne around my house is a neighborhood permit parking area limiting parking to two hours for non-residents (a remnant from controlling the behavior of dealership owners). I don't think commuters parking in neighborhoods will be more of a problem than it is now because the LRT won't be any faster than current mass transit, but I think the reduced on-street parking for University businesses will cause parking problems for the unlucky folks not in permit parking areas. (And remember, people live in St. Paul instead of Minneapolis because they hate parking problems.)

Alley traffic/heavy neighborhood traffic is already a reality due to current congestion along University (the worst of which is due to congestion on 94) that the addition of LRT and the preservation of two lanes of traffic will hopefully help to address.

A highrise blotting out the sun is a real concern expressed by many residents living north of University, where the construction of a four story building 15 feet away from the southern edge of your lawn really does completely banish the sun from your backyard and south facing windows. This is a zoning issue, and the proposed transit-oriented development zoning changes will keep the existing 35-foot (45' with CUP) building height limit for the north side of University. We don't get enough sun in Minnesota as it is, don't belittle the man who complains when you threaten to take more of it away.

I think residents along the central corridor will be fine, it's the small business owners on University that are getting boned.

HAhahah he sure sounds like a cranky person..so funny.

Gosh, there is really much useful information above!