Sidewalk of the Week: Milton Street and University Avenue 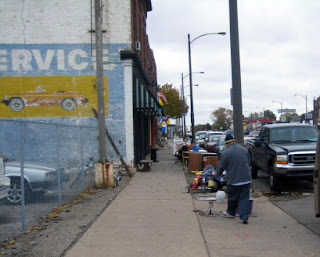 Often, when I think about examples of good sidewalks in the Twin Cities, I'm drawn to a certain kind of neighborhood. You know the type: places rife with coffee shops and Bibelot boutiques laced with fancy soap and unpronounceable flowers. In other words, places for wealthy (white) people.

These parts of the city have the best sidewalks. Street furniture and flower planters and inlaid bricks cost money. It's a fact that depresses me when I stop to think about it, that good sidewalk culture can be restricted to ladies who lunch and gentlemen prone to strolling.

But fancy sidewalks have their weaknesses. They can be marked by a certain style that quietly restrains the life taking place. Or, rather, it's not so much a style as an order, a cleanliness, a feeling that things are 'in place' and that there is a place for everything. There's an expectancy that says to you, “this is the kind of thing done here" and keeps you in check. This feeling is palpable and comforting, but it's also a limit and a containment and a closing of doors, so that sometimes these places, these fancy places with flowers and benches and nice paint and streetlights with iron Victorian shells can seem like the most boring and least vital places around.

That's why it's so delightful to find and encounter interesting rich sidewalks that have nothing to do with money. One of the best of these is the corner of Milton Street and University Avenue, a stretch of sidewalk with more curiosity than most of Kenwood. And much of this sidewalk life orbits around Marty's Second-Hand Store.

[Google Streetview captures a moment in the life of the Milton & Dale sidewalk.]
There's a different economics at play here. Instead of the silver laptops of the creative class*, you find the turning of scavengers, men who discover and uncover and rescue and rehab the forgotten flotsam of our world.

The sidewalk outside the Second-Hand Shop is a parade of objects. Chairs and desks and bicycles and all kinds of wooden trinkets pour out store doors each morning and return back to sleep each night, each day spilling a new puddle of file cabinets and chairs and endtables and desks and lamps and chairs and more chairs on top of that. These things spill out and collect themselves year round along the street, a different kind of street furniture, absolutely for sale.

This is a different economy. Folks here are scrambling to make ends meet not with 'culture' and credentials, but with tired arms and quick wits and Chevrolet Vans. Running through this corner is a slow movement. The space is at work. A ladder appears, leaning on a fence. Chair-piled pickup trucks creak to the curb. An unkempt man slouches inside to broker a mysterious deal.

Inside Marty's Second-Hand there is no sign of money. No prices or clocks or registers of cash. This place relies on first-person arrangements. If you have to ask, you'll never know. Seal it with a handshake. 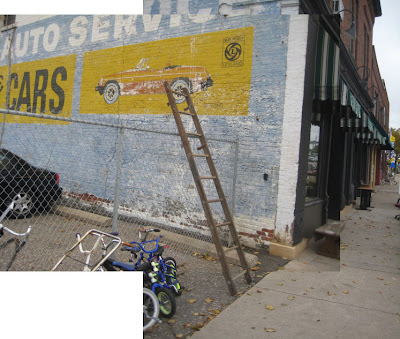 [The ladder leads up and over.]

[A white truck fills with the upturned legs of white chairs.] 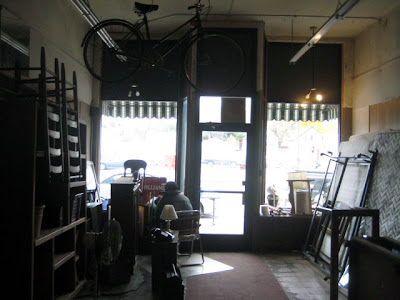 [The dark and quiet of Marty's Second-Hand, where time moves so slowly.] 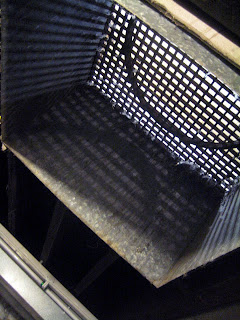 At the same time, this space is not at work. If you are an older man, here is for sitting all day and talking or not talking, just sitting on one of the many chairs spread out to the edges of the sidewalk's crust, having conversations found only in dusty books, all murmurs and nodding and glances and hoarse accord.

Here's a little secret: the basement of the Second-Hand Store is center of forgotten basements, tables covered in baseball cards just like the basement of your mother's house, shelves where the dust is gathering dust, a place to go to be forgotten and remember. But if you're down there, a little vent leads up through the ceiling/floor where light and sound trickle down through a grate. Eavesdrop at your leisure. 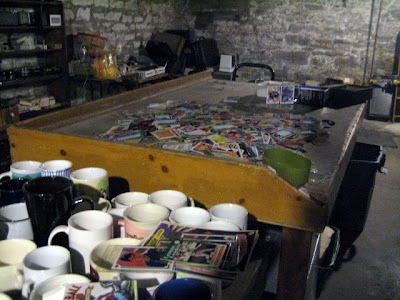 [This basement, like yours, is filled with mugs and cardboard.]
Just up the street you find haircuts for sale, hawked by a sidewalk sign. On the next block, U-Haul stores its overstock. Old cars raise their hoods to the sky, engines in a near constant state of revision. At the other end, the red-on-white sign of "Shear Pleasure" points toward your horizon, perhaps the worst haircutting pun since “Curl up and Dye”.

This sidewalk is very much alive. Each time you drive past it or stumble down, it will be different. It will have moved metabolically, marching its way around the city and through the alleys of America. Wherever you go, folks seem to find themselves where they aren't unusual. Maybe this sidewalk isn't more 'open' than the tea and cakes variety. Maybe it just cultivates a different kind of culture, a different form of street parade. But at least for now, today it's rich with life. 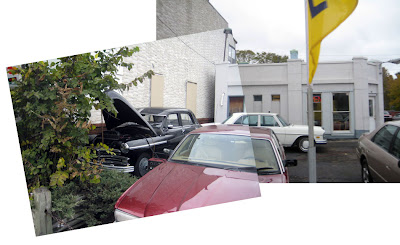 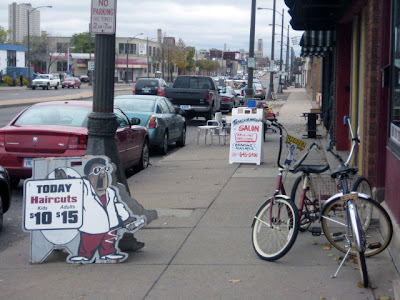 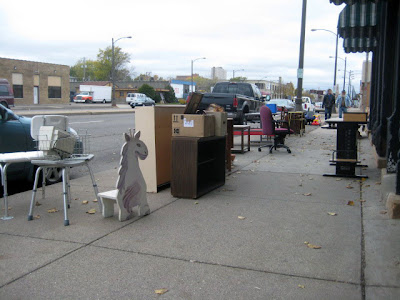 [What is the horse thinking?]

This side walk looks so nostalgic! there's no doubt about it!