[Part One of a series whereby, either through coincidence or nostalgia for breakfast, I steel myself determined to delve into the odd convergence of three foodstuffs and their history-laden packaging. Bear with me, and I think you too will be struck by the uncanny dignity of American canning. This content recycled from my now mothballed website, excitablemedia.com.]
Ever since I bought a newfangled alarm clock I've been a man of strict routine. Case in point, my daily breakfast never varies: a bowl of oatmeal, piping hot, two cups of coffee, and a whole heap of salt to kick it down. The salt goes on the oatmeal, by the way, not in the coffee, though a few years back I happened to pour salt in my coffee and it's not undrinkable. Regardless, just yesterday I was again seated at the breakfast table listening to the neighbor's dog, a big black beast, lame, blind and deaf, that materializes in my kitchen window each morning, limping through the backyard and greeting the sun with barks filled with pain, a tragic scene to say the least, and I realized that all my breakfast food comes in cylindrical containers. Here's the way it happened: I had sleepily put the Quaker Oatmeal lid onto the Chock Full o' Nuts can, and I only realized much later that it didn't matter because the wrong lid fit like a glove. The cans are well nigh identical, at least in circumference, and when you include vital condiments, i.e. Morton Salt w/EZ-pour spout, you've got yourself a trifecta of geometric containment.

I don't know about you but I wasn't the least surprised to find there's nothing Quaker about Quaker Oatmeal, and he's an early example of shameless religious exploitation, a la Mel Gibson's Christ movie, which by the way I'll probably see more than once. But as it turns out, the Oatmeal people and the Quakers, a.k.a. the Society of Friends, have developed a neo-Darwinian symbiotic relationship, each milking the other's public image like an old-fashioned celebrity marriage. We need only ask: Would the Quakers be such a dominant political and religious force today if it weren't for the ubiquitous Oatmeal? On the other hand, for whatever reason, similar religious marketing schemes haven't panned out. Neither Jew Flakes nor The Box of Latter Day Flapjacks ever really caught on with the general public, though fossilized remains can still be found in small museums and smaller general stores. If pressed, even in spite of the dismal failure of Pope-brand Frozen Tacos, I'd say it was the Quaker's distinctive hat. 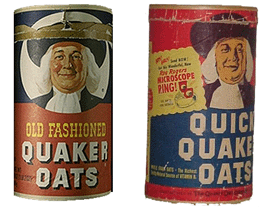 [Quaker Oatmeal Quaker III and Quaker Oatmeal Quaker Jr.]
Now some history: Quaker Oats was born in Chicago, Illinois, the king of company towns, and was the end product of an industrial revolution in grain production that swept the 19th century agrarian breadbasket from Omaha to Indianapolis. Having consolidated mass-production, the next step was the creation of mass-consumption and mass-distribution networks, which meant only one thing to the Chicago grain barons: advertising. Thus 1877 found a group of grain companies placing the image of The Quaker on their package, holding a scroll marked with the word "PURE," and a model of industrial progress was born.

Success came quickly for the Quaker Oatmeal Quaker, the first nationally marketed artificial foodstuff mascot in history, and he spawned countless emulators, from Aunt Jemimah to the Domino's Noid to Paul Newman. Strangely enough, at first the Quaker Oatmeal box was square, until changes in ergonomic theory made it possible to switch to cylindrical oatmeal containment in 1915. In 1947 the Quaker was redrawn, brought into the 20th century, originally in pure black and white until color was added in 1957. And for some reason, probably having to do with the sweep of cultural change, the Quaker was updated again in 1972. Don't be shocked, but Quaker Oatmeal Quaker the Third is only thirty-two years old. (He looks older . . .) 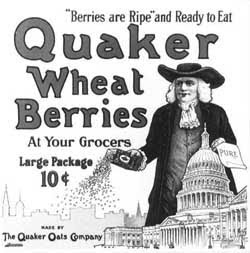 [I don't know why Quaker Oatmeal Quaker is pouring oatmeal on Congress. Do you?]
I have the personal privilege to know a Quaker or two, but I've yet to ask them if they eat Quaker Oatmeal. You see, while they're remarkable listeners, Quakers are a fairly sensitive lot and I'm reluctant to gauge too closely their mealy temperament.

But my oatmeal advice is this: Don't fall for the instant oatmeal trap. Standing before the supermarket grain shelf and looking down at the two smiling Quaker cylinders, one marked "Instant! One Minute" and the other "Original. Five Minute," go for the latter and you'll thank yourself later. If you took out your TI-85 and plotted Morning Time Available vs. Taste Differential, I think you'd find, as I did, that the Original Oatmeal is well worth the wait. On the other hand, don't make it with milk. The box-back directions do offer you the choice, but I've found it very difficult to make milk-based oats w/out turning the kitchen into a reenactment of what Mrs. O'Leary's cow must have felt like after the Great Chicago fire had been raging for a while. What I mean is, the milk heats up, half-solidifies, and bubbles over the pot onto the stove. Take it from me, it turns the oatmeal pot into an awful mess. If I had a Quaker convert for each time I've burned my breakfast Oatmeal making it with milk, I'd have a quorum. 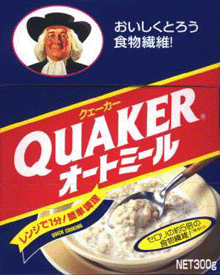 [Do Japanese 'get' Quaker Oatmeal Quaker?]
The upside to oatmeal is that it's healthy, but the downside is that Oatmeal tastes pretty darn bad, which explains the golden rule of oatmeal: The Condiment Imperative, something they know well at Denny's, where if you order a bowl they make sure to bring you three things: a pitcher of milk, and bowls of brown sugar and raisins. But me, I'm a bit old fashioned, with antique tastes, and invariably I have to beckon back my waitress and demand salt. I eat my oatmeal with salt so that you don't have to.
Posted by Bill Lindeke at 5:08 AM

An alternative to the stove top method that I use is take a small soup thermos and fill it with boiling water then empty it. Add 2 servings of dry rolled oats and then fill the container with more boiling water and condiments if you wish. Place the top on it and you have breakfast to go. The oats cook just fine without the over-boil that happens on the stove or in a microwave. If you wish it to be with milk add some non-fat dry milk.

I am enjoying this as I type(with brown sugar and no salt.)

An alternative to the stove top method that I use is take a small soup thermos and fill it with boiling water then empty it. Add 2 servings of dry rolled oats and then fill the container with more boiling water and condiments if you wish. Place the top on it and you have breakfast to go. The oats cook just fine without the over-boil that happens on the stove or in a microwave. If you wish it to be with milk add some non-fat dry milk.

I am enjoying this as I type(with brown sugar and no salt.)

It can't have effect in fact, that is exactly what I suppose.

what an amazing analysis, these container are part of the story of our country