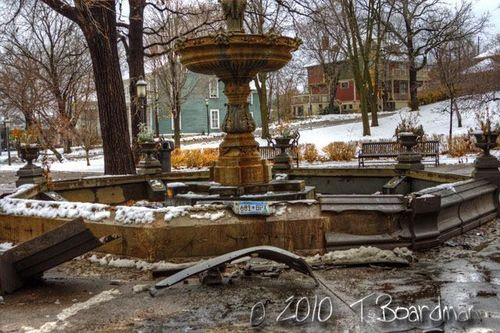 ["You shoulda seen the other guy." Img. Boardman.]
Last week, a drunk driver smashed his car into the beautiful fountain in Irvine Park, a lovingly old neighborhood tucked into the armpit of downtown Saint Paul. Irvine Park has a lovely little square, around which you can walk. In the middle sits a lovely, and well-ornamented fountain. Its the kind of place that's quite rare in our car-loving United States.

(As you can see, the fountain didn't get away scott-free. I can only imagine what the car ended up looking like!)

One way of looking at this is to see a needless tragedy. How horrible that this fountain should be there, and that some poor and obviously out of his gourd sap would drive so destructively into its Victorian concrete!

But it occurs to me, also, that there's another way of seeing this crash. Provided the driver is OK (and it seems that he was), this can be seen as a good thing, certainly better than any alternatives involving people or dogs or houses. Perhaps this car-resistant fountain is one of the more beautiful ways to 'calm' streets? 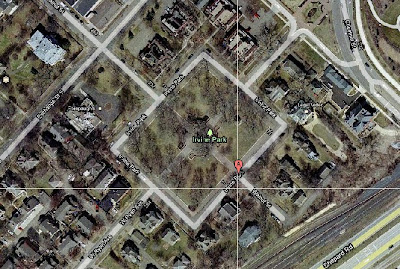 [You'd have to be pretty blitzed to drive into the fountain in the middle of the Irvine Park square.]
This whole event reminded me of a story I heard once on the KunstlerCast, certainly my most 'guilty pleasure' podcast, a story told by the co-host Duncan Crary. Crary had been involved in an effort to erect a statue on an intersection in Schenectdaty, NY, only to be told that such an immovable object would be a menace to drivers.

I wrote him the other day, and here is Duncan's tale :

Back in 1999, as a senior at Union College in Schenectady NY, I started raising money to commission an original statue of William Henry Seward, class of 1820. Seward is famous for engineering the purchase of Alaska, but he also served as Lincoln's Secretary of State and helped write the emancipation proclamation.

I was contacted by a local sculptor named Claude Seward (not a direct descendant, but a distant relative of Wm. H. Seward). We got as far as creating a maquette of the proposed statue, but I was never able to raise the necessary funds for the statue (town, gown, and town & gown politics all played a role in that).

My cousin Cal Crary ended up taking the initiative (5 years later) to purchase a boulder from the Seward Highway in Alaska and had it shipped to Seward Place in Schenectady where it now rests on the corner of Nott Street and Seward Place on the city side of the cast iron fence around the college. I then stepped in to write the text for the bronze plaques on the boulder.

Back to the car accident angle.

When we were still pursuing the statue idea, the then president of Union College (Roger Hull) told me that the perfect spot for the statue would be in a small circle in the middle of an intersection on Seward Place (a city-owned street) in front of one of the entrances to the college.

The college had spent a small fortune purchasing and rehabbing many of the houses along Seward Place on the other side of the street from the college campus. In the process, the city helped to rehab the entire street -- by putting in new granite curbs, installing Belgian block pavers at the intersections, installing "old timey" lamp posts, etc. (the usual street rehab stuff).

That circle for the statue was defined by an attractive granite curb around it.

Technically, the president of the college had no authority to promise me that spot since the city owned it. But in reality, the city probably would have gone along with it if the college really wanted it.

Later on, however, the possibility of using that location (the circle) was revoked by the president after many DOT types complained that it would just end up getting hit by a plow or crashed into by a drunk driver.

Well yeah. It's a frustrating story.

On the one hand, the DOT is obviously right. The statue, like the Irvine Park fountain, will probably end up getting plowed into by a drunk driver.

Of course, they probably didn't consider the fact that that crash could be a good thing! It's far better to have a drunk driver plow into a giant granite boulder-type-person, than to have them plow into a small, actual, fragile and killable-type person. No?

Drivers will always be driving down the street, drunk or texting or otherwise. The only question is: How fast will they be going? How careful will they be? 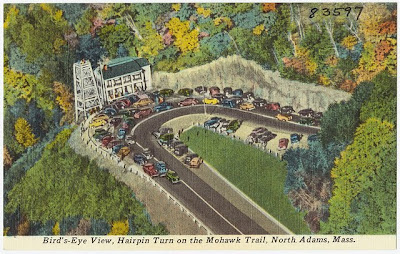 [The hairpin turn in North Adams, MA is a very effective traffic calming technique.]
This whole debate reminds me of the discussion of road safety in Tom Vanderbilt's wonderful book, Traffic. The crucial paradox: "safer" streets are actually more dangerous. The more you design streets with safety for car drivers in mind (e.g. wide lanes, few curves, plenty of room on the shoulders), the more you encourage people to speed faster and faster. And the more the entire world begins to look like a freeway on-ramp.

On the other hand, seemingly 'dangerous' roads are often paradoxically safer, for both pedestrians and drivers. This works out because these kinds of streets (think of the narrow, barely two-way streets in South Minneapolis) simply don't allow cars to travel unsafely for the very simple, unavoidable fact that it would be suicidal.

And that's one reason why we need more fountains and statues in the middle of interesting intersections. We need more squares and roundabouts and traffic circles and speed bumps and large and unsmashable trees along the road. The only consequence of this kind of traffic calming is that every so often, every once in a while, you get some moron who drives straight into the fountain or statue or whathaveyou...

The square in Irvine Park is a gorgeous spot. I'd like to see more fountains and squares and circles and statues, even if it means that jerks drive into them from time to time. 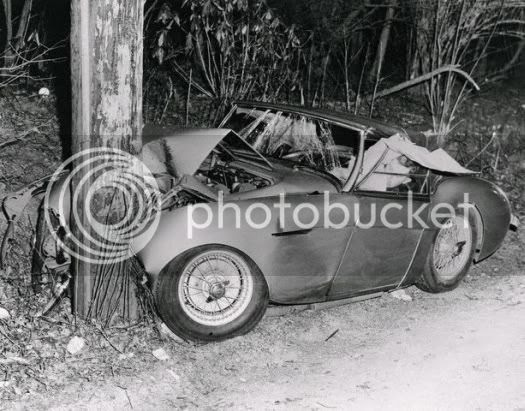 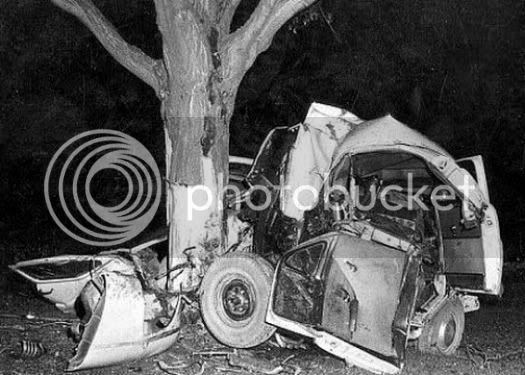 ["The tree". Time and place unknown.] 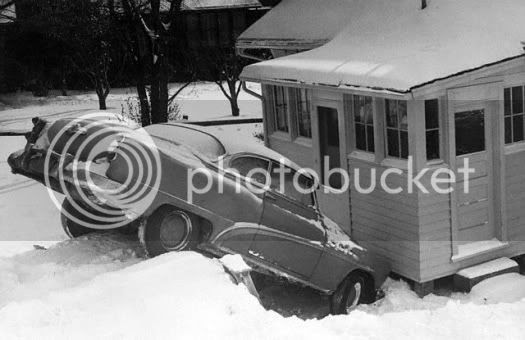 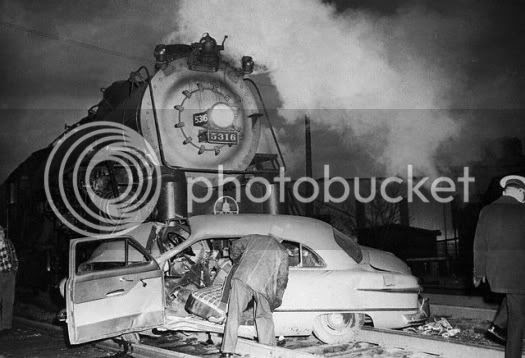 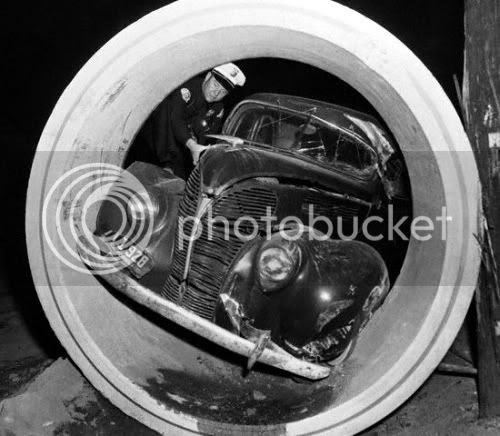 Hi, Some one from facebook refereed your link i have book marked it nice blogs you write see Free Adwords Voucher here

Gosh, there is really much worthwhile data here!

Oh my god, there's so much useful info above!

The sewer was incredible, I wonder if the guy survived this crash.

I want to to thank you for this very good article!!
I absolutely enjoyed every bit of it. I have you book marked to check out new stuff you post… Cara Tepat Diet Sehat Yang Aman Bahaya Mengkonsumsi Narkoba Obat Anafilaksis Manfaat Telur Ayam Cara Melawan Kanker