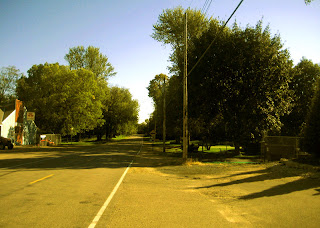 People often imagine that landscapes, the cities and towns that accumulate on our horizons, develop along lines of progress. We like to dream about how, long ago and far away, we once lived in huts and shacks. But today we have our futures, all the modern amenities, our technologically and culturally superior homes.

The suburbs, in particular, have this aura. Where once was farmland and small roadside stops on the very utmost edges of things are now something newer and better. They've evolved, in a sense... all our dales and fields and groves have blossomed into a brave new world of -dales and -fields and -groves. We whisper to ourselves: The past is gone. Don't mind it. Let it drift slowly from your hands.

But that is not the whole story. Time is not so simple.

I found myself, one day in autumn, happening across the strangest thing in the middle of the suburban edge, smack in the center of the culs-de-sac. I found myself traveling down Lamar Avenue South, and there like a needle in a haystack, was Old Cottage Grove. Somehow, the old and tiny 'downtown' of Cottage Grove as it had once used to be was there, buried in the midst of the curlicue houses and boxy three-car garages. It was a mosquito trapped in amber, an oyster's pearl. Somehow you find the Old Cottage Grove buried inside the new one.

These two Cottage Groves persist and exist, side-by-side, separated only by a farm field or two. You find streets with little traffic and dirt paths alongside them for feet walking on country roads. Arching trees form a sunshade lightspeck canopy over your head. Metallic buildings lurk low and drab and gray on the corners of streets, protected by sharp moats of farm devices. A small and barely open store sits quietly, waiting for a moment of attention. And a bar without windows that once was the only place around sits quietly, now the only place around that is not heavily marketed. It sits quietly and waits for a football game.

[Half of Lamar Avenue, the main street of Old Cottage Grove.] 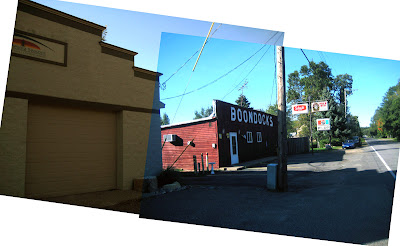 [The bar and its signs.] 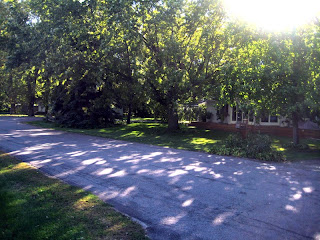 Old Cottage Grove hides to the North-East of New Cottage Grove, which clings like kudzu to the traffic of Highway 10. It rests tucked away, a bit off the beaten track. Somehow its fenced quietude reminds me of a small Long Island fishing town, or somewhere else where everyone can hear everyone.

What I fail to understand is how it could still be here, I the midst of the 21st Century when the land has been turned and toiled and planted with its infinite sheetrock.

I wonder if the people here realize what's happened all around them along the roads. Do they look over at Woodbury with jealousy or contempt? How do these two Cottage Groves get along? Do they eye each other warily, or is it more like ships passing in the night? Are the wavelengths so impossibly different that they cannot barely even glimpse each other from the corners of their cottaged eyes? 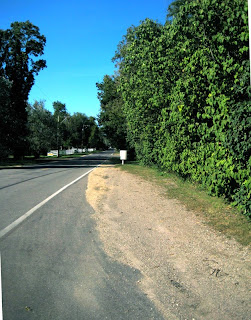 But this is the real Cottage Grove. You can almost feel where the grove was at one point, a little clump of trees along an old country road, now long since bypassed by progress. But somehow it remains, the old kernel of the city. Does every suburb have such a heart? Was there an origin point for everything, the first corner where someone first planted their flag and said, “This is where I stake my self.” “Here I will sell general merchandise!”

I have to wonder. If someday you find yourself wandering the labyrinthine circuits of the suburban chain, and all at once the air gets quiet and trees grow up around you and the ghosts of sidewalks appear at the edges of your imagination, you might have found one of these places, the lost hearts of suburbia, the beginning of the end.

[The sunlit corner of Upper 74th Street predates the needs for a sidewalk.]
Posted by Bill Lindeke at 2:48 PM

Heh, yep, many suburbs have these little kernels hidden in them somewhere. In Minnesota, many towns were set up by or for the railroads, so you can follow existing or abandoned rail rights-of-way to find the old centers of towns -- the railroads tend to be even more central to the cities than the 1920s-era state or U.S. highways that often parallel the rails.

Towns that had always been along roads are a bit harder to discover. Certainly, a number of places really have vanished. Others, usually outside of the zone of influence of larger cities, have continued to grow with almost perfect little grid systems, or have just remained little unincorporated settlements along roads. Heck, there's a community in Olmsted County west of Rochester that's literally called "Shanty Town" (despite the name, I believe there are a number of 1970s-era and possibly newer homes there).

I am somewhat fascinated by this whole concept too. It's amazing to see how the car changed our development patterns, and to wonder what might have been.

I lived a couple of blocks from here in the 70s.

- Next to the Boondocks bar used to be an old upscale hotel that had been abandoned for quite some time. I think they tore it down in the 80s, but it was a beautiful building.

- That tractor/lawnmower shop used to be a body/auto repair shop and was smaller. Part of that property was a small grocery store and post office.

- The park had a different building on it

- The side roads were not paved until the 90s, and they did not get mail delivery until the very late 70s